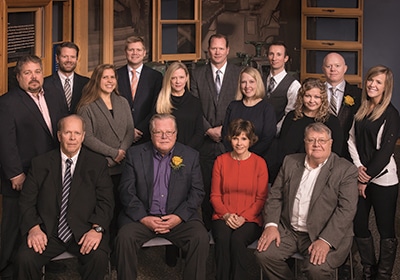 Over four generations, the Marvin family has built one of Minnesota’s most durable companies—and it’s still based in its small hometown.
By Gene Rebeck
| November 10, 2016

One of the happiest days in Jake Marvin’s life took place eight years ago, when he asked family members involved with the business a tough question.

As CEO and chairman of Warroad-based Marvin Windows and Doors, and a member of the Marvin family’s third generation, Jake assembled the stockholders in his family’s company. He had something momentous to tell them. Due to changes mandated by the Internal Revenue Service, the family had to sign off on a new buy-sell agreement to govern future ownership structure.

“The way ours was written, it required 100 percent agreement from all shareholders,” Jake recalls. “One of the things we did just before we got to that was to [convene] all of the shareholders in the fourth generation that were of the age of majority; that was nearly all of them, at that time.” As he explained at the meeting, there were a number of ways the family business could proceed. “We could sell it, we could sell it in part, we could bring in professional management and continue to own it, or we could own, operate and manage it.”

What’s more, he adds, “they could have done very well in a sale or a merger or some other liquidity event.” But when the fourth generation members were asked about selling, “most of them were offended by it,” he recalls. They all voted to retain private ownership of the company.

The response showed Jake Marvin and the other members of the third generation—his sister, Susan, then the company’s president, and his brother George, the board’s vice chairman—that the fourth generation wanted to carry on the family legacy. In many family-owned businesses, typically only a handful of members actually work for the business (though many others may have a financial stake). In the Marvin family, there are 14 members who hold full-time positions with the company, including 11 of the fourth generation.

It’s not to say that Jake Marvin and his siblings have made it easy for them. Family members don’t “inherit” a job—they have to earn it. And that may be why Marvin Windows and Doors has lasted so long as a family business.

According to an oft-quoted study from the Family Firm Institute, only about 30 percent of family and businesses survive into the second generation; 12 percent carry on into the third generation, with about 3 percent of all family businesses beyond that. Marvin Windows and Doors has defied those odds. And the company’s durability has been tested numerous times during its history, overcoming fires at its facility (in 1948 and 1961) and facing changes in the marketplace.

After World War II, the dominant force behind the company’s remarkable growth was founder George Marvin’s son Bill. He perpetuated his father’s entrepreneurial mindset, profiting from the boom in home building in the Upper Midwest and, in time, throughout the country.

Bill Marvin’s children grew up in the business, learning from the ground up. “Every single one of us started working for the company when we were really young,” Susan Marvin says. “At the age of 10, I was working on the switchboard and stuffing envelopes.” Her brothers “all started with the worst job, which was unloading lumber from a railcar.” Bill Marvin also established one of the chief rules of family ownership, which Susan Marvin summarizes as: “By the age of 33, you must work for the company full time or you must sell your stock.” The idea behind this, she adds, is that it “keeps us all focused on the success of the business, rather than looking at what the business can send our way.”

That rule is still in place. So is Bill Marvin’s entrepreneurial spirit, reflected in the company’s numerous product innovations. But as his children took over leadership, they established different approaches to running the business. “I’ve consciously evolved a more distributive style of management where authority and responsibility is pushed down,” Jake Marvin says. “I don’t make the final decisions on virtually everything in the company, as my father used to.”

Why? In short, the company is a lot bigger, the family more spread out. Though still centered in Warroad, Marvin Windows and Doors now has 12 facilities nationwide and employs 5,200. (About half of those employees work in Warroad.) As business changes, the way the current generation prepares its children for leadership also has changed.

“We try to give this fourth generation varied experiences that will help ground them as leaders for the future,” Susan Marvin says. A case in point is niece Christine, who became the company’s director of corporate strategy in August after serving as director of marketing for the Marvin brands. Before joining the family business full time in 2008, Christine Marvin worked a couple of years for a California building materials wholesaler.

There’s something else that Marvin family members need to prove: a commitment not only to the company but to Warroad, a town of 1,778 just six miles south of the Canadian border. And that’s one of the reasons Frank Marvin’s son Paul was named president at the beginning of this year, succeeding his aunt Susan.

One of Paul Marvin’s mentors was James Campbell, former CEO of Wells Fargo’s Twin Cities-based operations and its predecessor company, Norwest Bancorp. Campbell has known the Marvin family since 1985, when the company began banking with Norwest. (Campbell didn’t manage the banking relationship.) About 16 years ago, Jake Marvin asked Campbell to join the family board because of his broad management and financial expertise.

“They’re intuitive, they’re conservative, they pay attention to the competition,” Campbell says of the Marvin family. One reflection of that conservatism: Their company carries no debt. “Maybe that’s why it was easy to be his banker,” Campbell jokes. “We never loaned him any money.”

Campbell mentored Paul Marvin while he was living in the Twin Cities. There, Paul built a school bus company that Campbell describes as “a great little business.” In 2006, he sold it because, as he told Campbell, “I want to go back to Warroad. I want my kids to grow up there.”

That mentality reflects something about the entire family. “The Marvins care about the community,” Campbell says. “They have a culture and an ethic that is extraordinary.” He adds that “the ethic of the enterprise was built on the bedrock of small-town America. That’s something that resonates really well with me.” That ethic is reflected in Marvin’s commitment to Warroad and the company’s employees. Marvin is famous for its profit-sharing plan and for never resorting to layoffs, even during the recent recession (and the Great Depression before that).

All owners over the age of 18 attend the annual shareholder meeting. There, the younger family members learn more about the business and ask questions. “All of our children work for the company in summer jobs and sometimes on vacations from school, before they sign on,” Jake Marvin says. Those interested in building a career at Marvin Windows and Doors are sent to seminars for more formal training.

In addition, “We put them with [consultants] who can do a complete profile and analysis and really get in the corners with them,” Marvin says. “That’s not just testing, but a series of long interviews and a lot of back-and-forth to determine, along with testing, what their skill sets are, what it is that moves them, how do they see themselves going forward, where can they contribute if they want to be in the business—or if they don’t want to be.”

This past summer, three members of the fifth generation, whose oldest members are in high school, held jobs with the company. “They’re involved very early on in their lives,” Jake Marvin says. That was true of him and his siblings. The members of the Marvin family, Campbell says, “are the bedrock of Warroad.” And they’re working hard to stay that way.