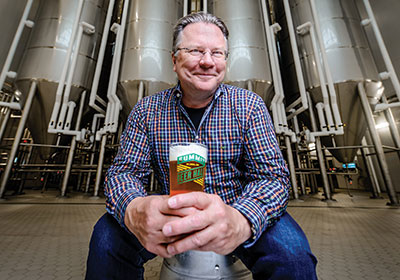 All Mark Stutrud planned to do was open what, back in the mid-1980s, was called a “microbrewery.” Seeing that the niche that coastal “craft” brewers such as Sierra Nevada and Samuel Adams had been able to carve out in the beer market, he believed he could do something like that in Minnesota. And in 1986, he started brewing his first Summit Extra Pale Ale and Great Northern Porter in a former auto parts store on University Avenue in St. Paul. Once it was rolling, he expected it to remain a micro operation.

It didn’t. Stutrud now oversees a campus of two large buildings that he projects will produce 150,000 barrels of beer in 2015—the equivalent of about 55 six-packs per barrel. That makes Summit one of the largest regional brewers in the country. It also makes Stutrud an inspiration for the new wave of craft brewers now drenching the metro—and someone to emulate.

Those who’ve known Stutrud since Summit’s early years know he hasn’t changed much. True, his role has shifted from brewer to executive—“and I use the term ‘executive’ loosely,” he says with a laugh. He still projects an air of mild amusement. But there’s a seriousness about him, too. Stutrud loves good beer, and he knows that a home-brewer’s romance can only take you so far. “Standing on concrete for 10 hours a day for a stretch of days—it can wear you down,” he says. “You can start to think, ‘Gosh, there are easier ways to make a living.’ ”

Brewing, after all, is a special type of manufacturing, Stutrud notes, one with the unpredictability that comes from working with components like yeast, “which is a live organism,” he points out. Working with those ingredients requires “an unwavering, uncompromising focus on quality,” he adds. “If somebody really enjoys the flavor profile of any of the beers we produce, they expect to replicate that experience.” And that, he says, takes a lot of work.

Andrew Schmitt, who surveys the emerging beer scene as director of beer advocacy organization Minnesota Beer Activists, calls Stutrud a pioneer, “and it’s not just in terms of Minnesota but in terms of craft beer in general,” crediting the Summit founder for “taking risks in an unknown market and blazing a trail.” What’s more, Schmitt says, “Mark’s commitment to quality and consistency are certainly things that new and upcoming brewers should be striving for.” In fact, Summit has provided free quality testing to numerous local brewers, including Steel Toe, Fulton, Lucid, Bang and Excelsior.

It’s all been a labor of love for Stutrud, not only because he loves beer and beer culture, but because of his deep loyalty to his customers—beer aficionados, of course, but also distributors and retailers. As Summit took hold in draft lines and liquor stores, Stutrud soon faced a big decision. Should Summit stay roughly the same size, producing about 35,000 barrels a year? Or, as Stutrud puts it, move into new digs and start all over?

With his investors’ support, Stutrud went big. “We wouldn’t be in business today, I don’t think, if we hadn’t taken that risk,” he says. “People would have gotten really tired of not being able to get the beer.” In 1997, Summit broke ground on its current brewery in an industrial area off West Seventh Street and moved in a year later.

The expansion allowed Summit to expand the number of beers it makes. Craft beer fans love trying new brews, and certain styles (notably, hoppy India pale ales) have become particularly hip. In 2009, Summit launched its Unchained series, which gives the company’s nine brewers a chance to make other styles of beer. And last year, Summit began canning. Stutrud expects cans to make up 10 to 12 percent of the brewer’s sales in 2015, and “without any significant cannibalization of the bottled beer. Essentially, it’s all new business.”

To accommodate the company’s continued growth, Summit purchased a neighboring building, which now accommodates the canning line as well as Summit’s business offices. It also gives Summit the capability to double its current production capacity to 300,000 barrels a year. There are no firm plans for that now, but who knows?

In any case, Stutrud believes the local market could soak up that added production. For all its growth, Summit remains largely a local beer. Minnesota accounts for 88 percent of its sales, with about 72 percent in the metro; the rest come from neighboring Iowa, Wisconsin and the Dakotas. (The company also established a small presence in the Chicago area.) The extra-pale ale remains the flagship, making up of 50 percent of the company sales; SÃ¡ga India pale ale, introduced in 2012, now is 20 percent of sales.

“I’ve never really had the ambition to be a national brand,” Stutrud says. “The margins are better when you have your sales closer to home. The farther away you get from the brewery, the more the per-unit cost you spend on marketing.” It also means fewer distribution relationships, which “keeps our lives simpler.”

Building a brewing company of Summit’s current size “is not some kind of ego trip I had,” Stutrud says. “That’s a testament to our customers. They led us down this direction. When I think of the people that are a part of this organization, our customers, the products that we make, the technologies that we’re applying—it’s all been a marvelous experience.”