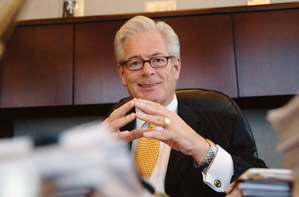 In 1980, Mark Sheffert resigned as president and COO of St. Paul–based North Central Life Insurance Company, where he had become perhaps the youngest president of a U.S. insurance company (he was 33 at the time). At the request of North Central’s chairman, Sheffert agreed to remain on the company’s board, where he served for more than a dozen years.

Seven years later, Sheffert had risen to president of First Bank Systems, where he oversaw 7,500 employees in 154 locations representing three-fourths of the company’s operations. When he informed the board in 1989 that he was resigning, they too asked him to remain on the board and help with the leadership transition.

In short: Even when Sheffert ends a professional relationship, he remains respected and valued. Twenty years later, his reputation for integrity and his profound passion for values-based business practices have only grown stronger. He has served on more than 40 boards, about half as chair, and his influence reverberates throughout the Twin Cities business community.

“Mark’s style of leadership inspires every board member to perform at the top of their game,” says John Satorius, chairman of Fredrikson & Byron, a Minneapolis-based business advisory and litigation law firm, who has worked with Sheffert on various boards. “That means speaking their mind, being candid and forthright, and not shying away from the tough conversations.”

Sheffert may be tough-minded, but he’s also warm-hearted. “On three occasions, I have been the legal counsel at a meeting where Mark needed to be very direct with the CEO about performance and what needed to happen,” Satorius says. “He’s the most effective I’ve ever seen at drawing the CEO in a problem situation like that into an effective, constructive dialogue that isn’t personal. At the end of the day, the CEO felt respected and the board felt like it was a positive outcome. That’s really difficult to do.”

A few of the boards Sheffert has served on have been clients of Manchester Companies, the Minneapolis-based financial services firm he founded in 1989. Manchester has provided corporate renewal, financial advisory, and investment banking services to more than 600 companies, ranging from $20 million to more than $5 billion in revenue. Manchester (sometimes through its clients) has been recognized for its success in restructuring and revitalizing businesses by the Turnaround Management Association more than any other similar firm in the U.S.

“Finance, capital structure, and strategy are areas where I feel quite comfortable,” Sheffert says. “I adhere very strongly to the fiduciary duty that a board has. And I think people would say that the notion of best practices in corporate governance is a strong suit of mine.” Sheffert says that he enjoys “the challenge and being able to take many disparate parts and pieces and glue those together into a vision and a strategy that helps a company become a superior performer in its industry. I enjoy serving on boards with smart, well-intentioned people. And I absolutely love to see companies succeed, employment growing, and more taxes getting paid.”

What’s particularly needed now, Sheffert believes, is a renewed commitment to corporate ethics. “If anything’s written on my tombstone,” he says, “I hope it says that ‘He made a difference, he played the game fairly and by the rules, and he insisted on values-based organizations with good corporate governance.’”

Sheffert currently is board chair for Health Fitness Corporation and BNC Bancorp. He is also a director for Allina Health System.