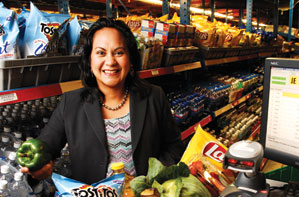 On July 28, long-time online grocer SimonDelivers announced that it had sent out its last yellow truck. A day or two after the September TCB came out with a heartfelt funeral eulogy, we got the news that the company wasn’t dead after all. After it closed down, President Liwanag Ojala and others at SimonDelivers had been looking for ways to reopen. With the company’s purchase by St. Cloud–based grocer Coborn’s, Inc., in early September, they found one. The newly logo’d trucks—still SimonDelivers yellow—began rolling on October 28.

Ojala says that everything will be pretty much the way it was before, albeit with a slightly smaller delivery territory. She’ll be leveraging the Coborn’s chain’s buying power in order to overcome consumer perceptions that online grocery buying is a spendy option.

“Our new value proposition to the consumer is going to incorporate lower prices—people now are looking for a deal,” Ojala says. “So our price point is going to be significantly different from where it was with SimonDelivers.” Lower delivery fees on large orders and Coborn’s branded products are also on the list.