For board service to Health Fitness Corporation
April 01, 2020 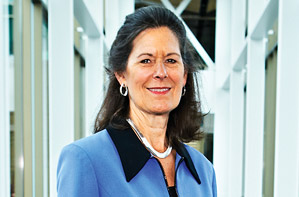 Perhaps the epitome of Linda Hall Keller’s career, which includes executive positions at Honeywell and Ceridian, was taking charge of a debt-laden Minneapolis company called QuickMedx in April 2002. She and her team renamed the company MinuteClinic and transformed it into a groundbreaking “retail health care” operation, with clinics located mostly inside supermarkets.

“I borrowed money from the bank so I could continue to lead the company,” Keller recalls. “Restarting MinuteClinic often felt like lifting a car, but it was incredibly exhilarating, and I always knew it would be successful.” The company was purchased by Rhode Island–based pharmacy giant CVS in 2006.

That kind of drive also typifies Keller’s board service, which began in 1995 at Eden Prairie–based MTS Systems, a provider of material, component, and structural testing for automotive, aerospace, and biomedical companies, among others. At MTS, she served on the audit committee and chaired the governance committee.

“I love the creativity involved in problem solving, learning about a company’s strategy and position in the market, and interfacing with other businesspeople from a diverse set of backgrounds and experiences,” says Keller, who served on the MTS board for 11 years.

Diverse perspectives are why CEO Jeff O’Dell asked Keller in 2002 to join the board of Bloomington-based August Technology, a global supplier of semiconductor inspection equipment. She stayed on the board until August’s merger with New Jersey–based Rudolph Industries in 2006.

“I was looking for someone with nonindustry experience just so we weren’t all breathing our own air so much,” O’Dell recalls. “Linda had the confidence and skill to ask great questions that would challenge our conventional thinking.”

In 2001, her health industry experience helped earn her a seat on the board of Minneapolis-based Health Fitness Corporation, a health facilities management company emerging from challenging financial difficulties. She soon was helping to design a compensation strategy for Health Fitness.

“The compensation program has great strategic importance,” Keller says. “It must be totally aligned with the strategy and goals of the company. At Health Fitness, I retained an independent consultant to advise us much in the same way that an audit committee does.”

During Keller’s tenure as chair of the compensation committee, “the company did not lose any key talent,” says Jeanne Crawford, chief human resources officer of Health Fitness, which was acquired by Illinois-based Trustmark Mutual Holding Company in February 2010. “This was achieved by her in-depth knowledge of talent management principles, our business, our key talent, and what motivates them.”

Keller keeps busy with board work, consulting, and lecturing. She’s currently entrepreneur in residence at the University of Minnesota’s Carlson School of Management, and a business consultant at the Mayo Clinic.

Keller’s approach to board service can be summed up in four letters: NIFO. “It’s a wonderful saying by Glen Nelson, who was the board chair of MinuteClinic,” she says. “It stands for ‘Nose In, Feet Out.’” Directors, in other words, should closely watch their companies but stay out of their day-to-day operations. “Every director should subscribe to it,” Keller says.

Keller, who also serves on nonprofit boards (including the Minnesota chapter of Women on Corporate Boards), is on the advisory board of Wisconsin-based Primex, which provides wireless GPS-based clock technology for hospitals and schools. She’s also been on the board of the Federal Reserve’s Ninth District.