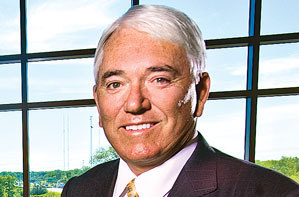 As befits a man in the construction services business, Lee Anderson refers to his company’s acquisitions as “bolt-ons.” That’s because each has been easily integrated into a larger entity. That entity, New Brighton–based APi Group, has been built on the St. Paul insulation and mechanical business that Anderson’s father founded in 1926. APi Group now comprises 33 independent companies providing fire protection equipment, steel fabrication, garage door construction, and other products and services.

“These bolt-ons minimize our exposure in any one acquisition,” Anderson says. “We’re looking at opportunities all the time, although it’s slower now. In a downturn, contrary to what you might think, companies aren’t offering themselves for sale. They probably don’t want to sell because they wouldn’t get the price they think they’re worth.”

Anderson joined his father’s business in 1961, fresh out of West Point and military service. He soon took over Asbestos Products, a St. Paul maker of insulation for pipes, ductwork, and boilers that his father acquired. Four years later, the younger Anderson, who had become company president, bolted on his first acquisitions to Asbestos Products: a sprinkler company. APi Group, the holding company that grew out of this acquisition, was named after Asbestos Products.

APi made occasional acquisitions during the 1970s, growing slowly and steadily. In 1980, with cash to invest and more acquisition opportunities coming his way, Anderson launched a strategic initiative to diversify within the construction and construction-related industries. He expanded into key markets, establishing both a national and international presence.

Fifty percent of APi’s business is generated by its life safety division, which focuses on fire protection, both alarm and detection. Its construction division is split between industrial (such as power plants and oil refineries) and specialty projects (including commercial and residential projects, hospitals, and schools).

APi rarely replaces the leadership team of the companies it acquires. “We look for companies where the leadership will stay on for at least three to five years,” Anderson says. “In almost all cases, we’ve been able to convince them that we can bring something to the equation that they weren’t able to do independently.”

That said, “we don’t want to buy anybody that doesn’t have a somewhat similar culture to ours,” Anderson says. “One of my bigger jobs is to go on these initial meetings and help determine whether the company would be a good fit. We’re looking for team players, people who won’t be put out by being part of a bigger organization. If we don’t feel that the sellers are willing to do that, we’ll pass on them.”

These days, Anderson rarely comes into the office, but he communicates digitally or verbally with senior leadership nearly every day. “I am available for meetings and acquisition situations, however,” he says. “That’s the fun part of the business anyway—watching it grow.”