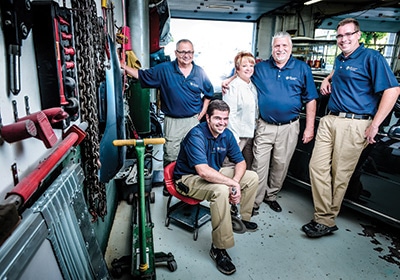 What it does: Auto body repair and painting

Number of family members in the business: 5

Number of family members on the board: 5

Latuff Brothers, the oldest auto body shop in the city of St. Paul, has changed both a great deal and not much at all since it opened in 1933 in a 4,000-square-foot building. True, its current facility is four times that. But while bigger, the business still operates at the same address on University Avenue, about two miles west of the Capitol. To be sure, the auto repair business has grown more complicated since the days that brothers John, Joe, and Mike Latuff opened their shop 80 years ago. That’s largely because cars themselves have become more complex. And like any good auto maintenance shop, Latuff Brothers stays up to date. But it’s the communication within and between generations that keeps the shop humming—and innovating.

In every generation, there have been at least two, and sometimes three, members involved in the business. Joe’s son, Pete, and Mike’s namesake son joined the shop in 1971; two years later, they purchased a stake in the business, buying out their uncle John. The first cousins have been running the shop ever since. Pete currently serves as president of Latuff Brothers; Mike is secretary-treasurer. (Another family member on staff is Pete’s wife, Lola, who became the shop’s bookkeeper in 1994.)

1966
The brothers patent their innovative frame rack that allows mechanics to perform repair work 360 degrees around a car without moving it.

1973
Pete and Mike Latuff buy out their uncle John’s shares and begin running the business; that same year, the two cousins buy the building next door and three adjacent property lots.

1981
Latuff Brothers becomes one of the first auto body shops to completely computerize its management system.

1982
Joe Latuff retires—last of the original three brothers directly involved with the business.

2004
William Latuff graduates from the University of Wisconsin–Stout and joins the business; four years later, his brother Robert also joins.

2007
Latuff Brothers wins the Governor’s Award for Excellence for its waterborne paint and curing equipment, which help prevent waste and pollution.

The third generation of Latuffs, Pete’s sons Will and Robert, started at the shop in the late ’90s, sweeping floors and washing cars. They now both work as estimators: Robert is mainly at the front of the shop and deals with customers, while Will handles the back-end production side.

Mike and Pete held various jobs before joining the family business, but Will and Robert never considered working anywhere but Latuff Brothers. “We spent all our summers and even college weekends working at the shop,” Will Latuff says. “We’ve always known that our plan was to take over the business for future generations. I just don’t know what I’d be doing if I wasn’t repairing cars. It’s just what we’ve done, what we do, and what we’ll keep doing.”

But it’s not enough to have car repair in your blood to keep an auto body shop running like a top. “Cars have become more complicated and robust in their designs, with additional computers and safety technologies,” Will says. “We’ve had to evolve by investing in computer technology so we can check diagnostic trouble codes and verify that the various and intricate systems in cars are operating properly before we release them.”

His father, Peter, agrees: “Cars are always advancing and becoming more diverse. You can fix a Subaru at noon and a newer model will drive up two hours later, and you can’t rely on your knowledge of the first repair for the next. You’ve got to learn all the ins and outs of each specific car that drives in.”

This is where communication is essential—sharing knowledge, sharing ideas. “We have production meetings every morning, but then a lot of the communication throughout the day isn’t face to face,” Pete Latuff says. “We all carry these two-way radios on us at all times, so the minute we need to get a hold of someone, they’re just a button away.

“It’s still Mike and I who make all the big decisions,” he notes, “but many times the boys will bring ideas to us, and if they’re viable—which they almost always are—we’ll run with ’em.”

Latuff Brothers has a history of quickly adopting innovative ideas. It incorporated high-tech tools early, completely computerizing its business management systems in 1981. More recently, in 2006 it shifted to environmentally friendly waterborne paints. This move helped the company win a 2007 Minnesota Governor’s Award for waste and pollution prevention. The younger generation is maintaining that forward-thinking sensibility. Will and Robert travel across the country to conferences, including the National Auto Body Expo, where Will recently spoke on new technology in cars and the safety triggers for estimating.

“The boys are fantastic at researching new ideas and finding new equipment,” Mike Latuff says. “It’s very competitive now, and if we can’t keep up with the industry we won’t survive. Working as a family is a big part of that [survival].”

Mike Latuff says the family members involved in the business are all independent thinkers. That means “Yes, we do disagree on occasion. But whenever that happens, we usually just sit down, talk things through, and it always comes down to whatever is right for the business.” His cousin Pete adds: “We very rarely have any major problems making decisions. And the kids are usually more right than I am,” he says, laughing. “Once you see the path you want to go down, it’s definitely easier to follow that path as a family. Every hard decision is much easier to make because everybody supports everybody.”

That sense of mutual support carries over to the shop’s mechanics and other staff. “Most of our employees have been with us at least 10 years—we have very little turnover,” Pete Latuff says. Mike Eiden was hired as a mechanic in 1977 and is the longest-serving nonfamily employee. “Latuff Brothers isn’t just a family business because it’s owned by one family,” Eiden says. “It’s a family business because everyone who works here really does feel like part of a family. We’ve all grown old together here. I couldn’t imagine ever leaving.”

And nobody has, at least not by layoff. Despite the business’ ups and downs over the years, it has never laid anyone off. “Always being able to hold on to our entire crew is one of our number one priorities,” Mike Latuff says.

That philosophy was recently tested by light rail construction in St. Paul, which left the street in front of their shop torn up for months. “Even before the construction, people were told to avoid the area entirely,” Robert Latuff recalls. “It ended up affecting us for about a year—the access factor was just huge.” But he thinks that “our family reputation and our longevity helped us through that. People really made an effort to make it to us, and I think that’s loyalty that only a family business can instill.” Although the construction hurt sales for most of 2012 and some of 2011, they came back strong this year. Indeed, Latuff Brothers reports that sales over the last five years have increased by 20 percent.

So it looks as though the third generation of Latuffs will be inheriting a business that’s running smoothly under the hood. “For years, it was Pete and Mike running things,” says Bruce Carson, a member of the Latuff Brothers board. “But both boys [Will and Robert] are taking charge more and more now. . . . They have evolved into leaders, not only in the shop, but in the industry.”