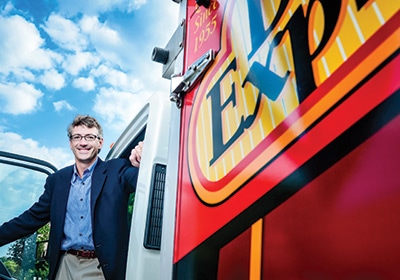 What it does: Produces and sells packaged sandwiches and burritos for sale at convenience stores, supermarkets, and vending machines; provides daily delivery of perishable food items to convenience stores and other retailers.

Number of family members in the business: 2

Number of family members on the board: 3

How do you maintain a family culture in a company that has (a) grown from its modest Minnesota roots to become a national business, with nearly 1,000 employees; and (b) has only two family members directly involved?

“It’s a delicate balance, especially as you get bigger,” notes Thomas E. Sween, chairman and CEO of E.A. Sween Company, an Eden Prairie-based supplier of sandwiches and other food items, primarily under the Deli Express brand, for convenience stores including Holiday, as well as logistics services for 7-Eleven and Walgreens, among others. To achieve that balance, E.A. Sween has developed big-company metrics to encourage and reward the kind of hard work that built the business. And it applies those measures to employees both in and outside the family.

In its essence, the business has both changed and stayed much the same since Earl Sween began making sandwiches and selling them to bars, bowling alleys, and marinas. In the 1970s, with the rise of the microwave oven, E.A. Sween shifted its focus to a fast-growing market—convenience stores attached to gas stations. The company now serves about 12,000 stores throughout the country. Though its delivery trucks are found nearly nationwide, E.A. Sween makes all of its sandwiches—about a million a week—at its Eden Prairie facility. E.A. Sween contracts with third parties for baked goods such as muffins, as well as hot dogs and coffee, which it also delivers to its customers.

1978
Company sets up an outside board.

1993
Company sets up a distribution arrangement for a group of 7-Eleven stores in the Midwest.

Tom E. Sween entered that business officially in the early 1970s, when he was in his 20s, though he’d been working for E.A. Sween Company since he was 8. Shortly after he joined the company as an adult, his father handed him the reins. Although Earl was the founder who’d spent long, long days building the family company, he let his son run things mostly on his own. That autonomy was “one of the greatest things I learned from him,” Sween says. Earl Sween, now in his 90s, keeps tabs but continues to let his progeny run the business.

His son has been putting that lesson to work in recent years. Though Tom E. Sween still holds the titles of CEO and chairman, he leaves the day-to-day operation of the company to his son, Tom H. Sween, who is president and COO. “I ran it for 40 years, and starting about three, four years ago, he began to run it,” Tom E. Sween says.

Tom H. Sween felt no pressure from his father to join the family business. “He just wanted you to work,” the younger Sween says. Though he worked for the family business as a teenager and during college summers, after graduation he worked for a couple years at an outdoor lighting company. That job taught him useful management skills and gave him a perspective on how other companies operate. Still, he admits, “in the back of my mind, I had always hoped that it would work out to work in the business.”

In 1997, Tom H. Sween’s hopes were fulfilled when a job opened up in E.A. Sween’s wholesale division, which was just beginning to become a very large part of the company. Unlike the route-delivery business, the wholesale side involves selling nationally to grocery distributors throughout the country, predominantly with their Deli Express branded products. For some of these distributors and their retail customers, the company distributes its products under their respective private-label brands. It also makes sandwiches to the specifications of some high-volume customers.

After about a year in the wholesale division, Tom H. Sween became an account executive in the route business. He then was asked to move to the Southwest, where one of the company’s regional sales offices was having trouble. Sween worked with employees to improve performance and ensure that company systems were being followed. He then returned to Minnesota. After working for eight years in the company, during which his father kept a hands-off approach, Tom H. and his dad talked about “the next step.” Tom H. earned an MBA from the Carlson School in 2005. Then the passage from father to son began.

In shifting the daily management of the company to his son, Tom E. Sween has relied on the support of the outside board of directors he established in the late 1970s. “Being a pretty small family business, it was pretty unusual to have an outside board,” he notes. “I recruited four or five outside people. We still have an outside board today. And they’ve been such a tremendous asset.”

When Tom E. Sween took over in the mid-1970s, E.A. Sween was an $18 million business; now it’s a $160 million company. Instead of simply throwing Tom H. into the deep end, his father wanted to “give him a better chance to succeed, and for the company to succeed.” The guidance of an outside board is one way to achieve that. Another, he says, is to run E.A. Sween almost “like a public company . . . with very visible metrics and standards of performance.”

Dick Pearson, CFO of the company from 2003 to 2008, helped establish those metrics. He joined E.A. Sween following finance executive posts at Pillsbury, Harmon Glass, and Telex. Now a board member, Pearson says that one of the chief reasons the company has grown and stayed strong is the way the family has managed it. Tom E. Sween, Pearson says, “really respected the people who worked for him. . . . All of the people who worked for Tom had a lot of autonomy, but they also got support when they needed him.” Among the executives, “there’s very little turnover. People who worked for me, most of them, had been there at least 20 years. There’s a high degree of stability on the executive team.”

Though Tom E. and Tom H. are the only family members working for E.A. Sween, the entire family participates in an annual meeting. They see the year’s results, the auditor’s statement, and more. “As a result of that, I think we’ve had a very harmonious [family in terms of the business],” Tom E. says. “Even our incentive plans with our management team are all based on performance.” That includes the two Sweens working for the company. “We have metrics with the board where we start the year against our plans, and if we don’t make it, we don’t get our bonuses,” Sween notes.

Tom E. Sween and his father have had opportunities to sell the business, but “my goal, and my dad’s goal, is to always keep it in the family.” Will that legacy continue? Tom E. Sween wonders: “It’s just so hard, especially when you get to that third and fourth generation, because the kids aren’t brought up with the same work ethic that I was when I was in the business as a kid, working weekends and nights. We were in there all the time, that’s all we’d did—out of survival.”

Still, he’s optimistic. Among the family’s fourth generation, the oldest is 11 years old, so succession concerns are “a long way off,” Tom E. Sween notes. As for the present, he notes that the three generations have been well aligned regarding the company’s direction. “I think that’s why it’s working,” he adds. His father continues to follow the company’s progress closely, and his son “has been a great student, and unafraid to ask questions . . . . I’m a lucky guy. And my dad’s a lucky guy. We both know it.”