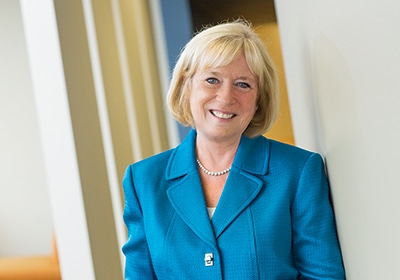 Kathy Higgins Victor is nothing if not candid. “I am a much more courageous director having been through the experiences I’ve been through,” she says. “When people have been tested, you really see their leadership—or lack thereof. And I think I’m a better director because of that.”

Higgins Victor faced some of the most challenging experiences in her business career while serving on the board of Richfield-based electronics retailer Best Buy Co. In 2012, then-CEO Brian Dunn came under scrutiny for indiscretion and left the company. Meanwhile, founder and chairman Richard Schulze stepped down to examine the possibility of taking the Richfield-based electronics retailer private. Profits were down and stores across the country were closing.

To add to her challenges, Higgins Victor also chaired the CEO search committee, which cast its net across the globe. She recalls a board atmosphere of divergent opinions and hard choices.

But that diversity of strong viewpoints helped Best Buy navigate those rough seas, Higgins Victor suggests. “It’s important to challenge one another’s assumptions and perspectives,” she says. “I also think it’s important to bring your own point of view and diverse thinking into the conversation.”

While other challenges remain, Best Buy has come through that stormy time, with the help of Higgins Victor’s tough questions, collaborative approach and hard work. It’s service that almost didn’t happen. Several years ago, she was Northwest Airlines’ chief human resources officer when she was recruited for the same position at Best Buy. At the time, Northwest was in the middle of labor negotiations and preparing to do a public offering. Higgins Victor declined the move to Best Buy—twice—noting that it would be “irresponsible” for her to leave her position during that time.

Some years later, when Best Buy heard that Higgins Victor would be leaving the airline, it again came calling, this time to ask her to join its board of directors. “And I said, ‘You know, the timing’s not right. Actually, I’m about ready to have my second child in a matter of days here,’ ” Higgins Victor recalls. Two months later, she agreed to meet with Schulze regarding that open board position.

“I was incredibly impressed with Dick Schulze’s interest in having a human resource capacity on the board,” Higgins Victor recalls. “That intrigued me—the fact that he had the foresight and was interested in bringing that skill set on. Because if you look at boards today, only 3 percent of sitting board directors have my background.” In November 1999, Higgins Victor joined the Best Buy board.

Currently, in addition to her regular board duties, she chairs the nominating, corporate governance and public policy committee and is a member of the compensation and human resources committees. That’s not all that’s keeping her busy: She also runs Centera Corp., a Minneapolis-based executive coaching and development firm she founded, whose clients includes UnitedHealth Group, 3M and Medtronic.

Much has changed since Higgins Victor first took on her directorship at Best Buy. In this digital age, information travels so quickly that companies face tougher scrutiny along with tighter budgets. The role of the director has had to evolve alongside these new challenges.

“Today’s governance risk is significant when you think about data security, when you think about the speed at which data travels, when you look at corporate responsibility; those are all relatively new matters,” Higgins Victor says. “They require directors to be on the top of their game. We have to ensure that we’re knowledgeable in that space, that we’re current and that we’re transparent.”

During the challenging times two years ago, Higgins Victor followed a process to ensure that every conversation among board members was fruitful. She’d hash out four to six options with the chairman, then speak with the other board members individually, allowing them the opportunity to be prepared with their opinions and solutions to any issues popping up during that period of crisis. That strategy proved effective, and she continues to practice it today. Best Buy, meanwhile, has turned around under its new leadership. Despite the numerous challenges and long hours, Higgins Victor remains grateful for the chance to serve on Best Buy’s board. And at the end of the day, she says, the most important thing is having the courage do what’s right for everyone involved.

“I’ve had the distinguished honor of working closely with Kathy for nearly 15 years,” says Hatim Tyabji, who chairs Best Buy’s board. “She not only brings valuable expertise in executive development and leadership coaching, she has an unwavering commitment to serving the best interests of our shareholders, customers and employees.”