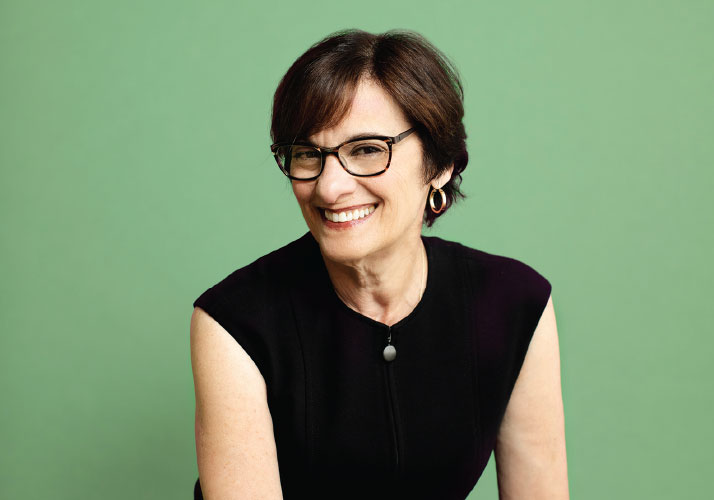 For board service to Fairview Health Services (2010–present)
By webpublisherpro
| April 01, 2020
Acceptance Speech

Hiring a top executive is a board’s most important task. For Minneapolis–based Fairview Health Services, that role was particularly crucial in 2015. The health system needed stability following CEO Rulon Stacey’s departure after just a year on the job. Meanwhile, Fairview had been in fruitless merger negotiations for several years with University of Minnesota Physicians. The storms and stresses roiling the U.S. health care system added up to an unhealthy situation.

All these factors put Fairview director Karen Grabow, head of the search committee, in the hot seat. Fortunately, the committee quickly found someone who looked like a strong fit: James Hereford, chief operations officer at Palo Alto–based Stanford Health Care. “The committee did a great job of identifying that he was really outstanding—instantly,” Grabow recalls. “Then we spent a lot of time trying to lure him here.”

Time was something the committee couldn’t spare. “We didn’t want to lose our candidate, who was being considered by others. We had the pressures of the university negotiations in the background. We needed to move fast.” That wouldn’t be easy. The search committee consisted mostly of Fairview and U of M physicians, people with little spare time of their own.

“I remember the headhunter and the head of [Fairview] HR saying, ‘How are we going to get all these people together so quickly?’ And I just said,”—she smacks the dining room table in her Lake of the Isles home— “ ‘We’re going to do it!’ I wrote them all and said, ‘I know you have incredibly busy lives. But this is absolutely critical. Please do everything you can.’ ”

They did. Hereford became Fairview president and CEO in December 2016. One sign that his arrival is calming the waters: Last year, Fairview and the U of M shook hands on an affiliation agreement that more closely integrates services and marketing.

Even under pressure, Grabow’s style is calm and collaborative. She listens closely to people, seeking to understand their capabilities and motivations. If that makes Grabow sound like a licensed psychologist—well, that’s because she is. She has a Ph.D. from the U of M in industrial/organizational psychology, a discipline that applies psychological principles and research to the workplace “to build effective, healthy organizations,” she says.

Grabow’s career has been a marriage of academic insight and corporate practicality. While in graduate school, she began working for Minneapolis–based Personnel Decisions International (PDI), helping client companies with organizational assessment and team building. After eight years at PDI, Grabow says, “I started to feel a little fraudulent. I was giving businesspeople advice, but I never was one.” Believing she’d be a better consultant if she spent some time inside a well-run company, she was hired by Target Corp. in 1984. Grabow thought she’d work there for a year or so. She stayed for 17.

Grabow joined Target just as the Minneapolis–based retailer was entering a major growth spurt. One of her early projects was helping the company convince resistant senior leaders of the value of an HMO-based health insurance benefit. Her deep understanding of organizational psychology helped provide a model to address their concerns and win them over.

In 2001, Grabow joined Arden Hills–based agricultural cooperative Land O’Lakes. During her 13 years as a senior vice president and chief HR officer, Grabow helped reorganize the Land O’Lakes HR function and revamped its consulting group, which provides leadership training and planning to member co-ops. In 2010, Land O’Lakes’ CEO Chris Policinski, then serving on Fairview’s board, suggested Grabow for an open seat. Her leadership in bringing Hereford to Fairview proved him right.

“Karen is very thoughtful and discerning about how she asks questions that advance my thinking and the thinking of the rest of the board,” Hereford says, adding that “she brings people together, especially our board, in a way that is incredibly constructive.” For her part, Grabow admires Hereford’s focus on both patient needs and metrics-driven insights. She and her board colleagues are helping him pursue his “transformational” vision for the $5.3 billion health system, which comprises hospitals, primary care clinics, senior housing, pharmacies and the PreferredOne health plan.

“The pressure the [health care] industry is under to change the model is intellectually thrilling,” she says. That kind of stimulus is part of the fun that board service provides “I love thinking about organizations as a whole, and what makes them operate effectively,” Grabow says. “I love working with talented leaders and staff. I love being stimulated by the challenges that confront us as board members.”