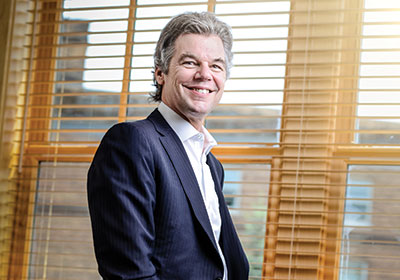 Graves Hospitality. He built a brand in hotels and restaurants by consistently raising the bar.
By Adam Platt
| July 02, 2015

Jim Graves has been a successful innovator in two volatile and perishable fields—hotels and restaurants. “It’s an art form for me,” he says. “We strive to be the best in class. I wouldn’t get a kick out of cookie cutters.”

He is best known in Minnesota for developing the Graves 601 in 2001, at the time arguably the only full-service luxury hotel in downtown Minneapolis. Along with Cosmos, the hotel’s restaurant, it earned rave reviews among discerning travelers. With his family-owned company now operating several hotels and restaurants here and elsewhere, Graves is one of the last remaining independent hoteliers in Minnesota. And he remains ambitious and driven.

His career has been distinctive and entrepreneurial. After a couple of years of teaching school in his hometown of St. Cloud, he was attracted to the hotel industry. After a quick two years working in hotel development in St. Cloud, Graves ventured out on his own in 1979, launching the AmericInn brand of limited-service hotels, developing 65 of them in small and midsize cities such as Bemidji and Owatonna.

“These were communities solely served by mom-and-pop motels with outdoor [room] entry,” Graves says. “We focused on quiet rooms, a sense of arrival, nice appointments. We were the first to build swimming pools at this level because even though only 3 percent of guests used them, it built our reputation [as a place that delivered more].”

AmericInns lacked restaurants, so Graves frequently sited them near Perkins restaurants. He developed several hotels with Perkins CEO Wyman Nelson, who eventually bought Graves out. Limited-service hotels in smaller markets offered a lower cost of entry and the simplicity of meeting guest expectations, Graves says, but they provided little in the way of creative satisfaction.

It was a risky venture. Graves recalls Bill McCaffrey, Block E’s developer, approaching him about a hotel because the developer needed additional valuation and amenities per his subsidy agreement with the city. Upper-bracket properties are more costly to build and execute, but Graves found himself drawn to the challenge.

Originally affiliated with the Le MÃ©ridien chain (it became Graves 601 in 2005), Graves’ high-style hostelry “was a pioneering hotel when Jim developed it,” says Paul Wischermann of Wischermann Partners, a Twin Cities-area hotel development and management company. “It was a courageous move.”

Last year, Graves sold the hotel to the Loews chain for $65 million. Loews was expansion-minded, lacked a Midwest market presence and made what Graves describes as “a very compelling offer.”

In a town once deep in prominent local hoteliers, Graves is one of the last remaining “patriarchs” of the local hotel scene, says Bill Morrissey, CEO and president of Morrissey Hospitality, which operates the Saint Paul Hotel and other hotels and restaurants. Graves Hospitality currently manages five hotels (it owns three of them) and 13 restaurants (10 owned).

That an independent hotelier would find itself without a signature hotel isn’t as odd as it might sound. “These days, REITs and funds own most [urban] hotels,” Morrissey explains. “And it’s challenging as hell to do independent hotels because lenders want the security of big brands.” The big brands don’t typically own their hotels, but receive a licensing royalty that often comprises more of a hotel’s profits than ownership receives, Morrissey says.

In the past decade, Graves had flagship hotel and condo projects in development in Chicago, Manhattan and Brooklyn. Only the Brooklyn project, now called the McCarren, was completed. Graves quickly received an offer for the property; its financing partners insisted on the quick payoff. The Chicago project fell victim to the recession; in Manhattan, the land was sold.

Most of Graves’ recent ventures are lower-risk hotel management contracts, reflecting the challenges of the development market. Owned properties are limited to a Residence Inn on Eighth Street in downtown Minneapolis, a Courtyard Marriott in La Crosse, Wis., and an independent in Marquette, Mich. Graves also manages the Doubletree and Crowne Plaza hotels in downtown St. Paul for the Mille Lacs Ojibwe.

Restaurants have lower barriers to entry, and Graves now operates four independent restaurants in Chicago and Minneapolis; the company also offers distinctive food in most of its hotels. “It’s the face of a hotel to the local community,” Graves says, “and the source of much of your event and function business.

Graves Hospitality needs to build its hotel portfolio because “we have to grow if you want to keep talented people,” he says. He has turned over the duties of president and CEO to his son Ben. “I’m a big-picture guy,” Jim Graves says, “looking at locations, structures of deals.” He’s pursuing several other projects, both owned and managed, including a property in Chicago’s Hyde Park neighborhood and a nine-unit condo building at 31st & Holmes in Uptown.

Graves would like to get back into the New York City market “but real estate there is frothy, and the entry-level cost creep is intimidating to many [financing] partners,” he says.

It appears that Graves’ next local hotel venture will be located at MSP international airport. In March, his company was selected to develop a nine-story, 300-room hotel there. The hotel should be ready in time for the 2018 Super Bowl. In short, Jim Graves is still in the game.