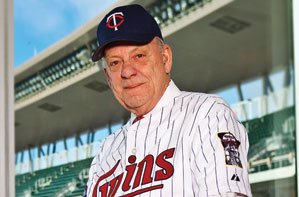 Highlight: May 21, 2006—the day the Minnesota Senate approved the Twins stadium bill

No one person is more associated with the decade-long effort to get Target Field built than longtime Twins President Jerry Bell, now the top executive of the team’s holding company, Twins Sports, Inc.

Bell was the face of the Twins in front of countless legislative committee hearings and in negotiations with public and private stakeholders. His dogged determination to make a stadium a reality almost single-handedly kept the vision alive through the years of controversy and legislative defeats.

Bell says that when Target Field opens in April, he will experience a range of emotions, from pride to relief. “Some of it will be that, from the Twins standpoint, you put a stamp on an organization for a long time with a new ballpark,” he says. “It’s new and exciting in and of itself, and we hope we’ve built what will become a top entertainment destination, and not just for baseball.

“You also think about the people who are gone and didn’t make it this far—that’s part of it,” Bell adds. “And, I think, the other piece of it is we hope that we’ve built a ballpark that will last for generations. If we’ve done that, then we’ve truly done our job well.”

Bell says the most unforgettable moment in all the ups and downs in his stadium crusade came on May 21, 2006, when the Minnesota Senate approved the bill allowing Hennepin County to levy a new sales tax on a 34–32 vote.

“The time for me to be able to celebrate didn’t come until 4 a.m. that morning,” Bell recalls, “when the Senate approved the bill with 34 votes—[legendary Twins center fielder] Kirby Puckett’s number.”