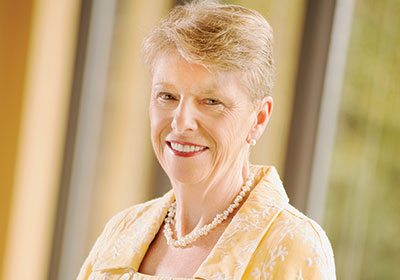 Ask Jeannine Rivet, an executive vice president at UnitedHealth Group, how she manages to squeeze her service on 12 boards of directors into an already hectic work schedule and she’ll smile, look you in the eye and say, “Oh, it’s fun. All of my jobs are fun.”

One of her longest tenures has been with the Schwan Food Company. Rivet is now in her 12th year of board service with the 15,000-employee, multibillion-dollar manufacturer and marketer of home-delivered frozen foods. And while the issues she has faced as board member have not always been plain vanilla (she’s helped it navigate more than a few rocky roads), the animated way in which she talks of her experience quickly conveys that she has indeed enjoyed it.

She fondly remembers being recruited by the late Alfred Schwan, brother of the company’s legendary founder, Marvin. “We had an interview that included a lot of tastings of Schwan’s food,” she recalls. “I didn’t know how much weight one could gain in an interview!” Rivet told him the same thing she said to everyone who approached her at that time about being on a board: “OK, you need a token female. Let’s put that aside and agree that I’m female.” So stipulated, they moved on to board responsibilities and expectations. She was intrigued with the chance to help remake the board.

“It was mostly an internal board at the time, but it was moving to an external board, which I thought was a good decision,” Rivet says. External officers can be more direct and ask questions that peers might not feel comfortable asking. “You get better input,” she notes.

Rivet has a very clear vision of what her role as a board member should be. She rattles off a string of definers: guidance, monitoring, review, strategy. But not management. Rivet has been on a lot of boards where members get that wrong. “Good board members check each other on that,” she says. “So if one of us is going too far down the line, we say, ‘OK, time out; we’re crossing the line, let’s pull back.’ ”

That noted, CEO evaluation is an appropriate role. Before she came along, Schwan’s didn’t have a formal process for such evaluations. Rivet designed a performance measurement process, using data-gathering tools that through the years have only gotten more sophisticated. “Data is everything, and today we have better tools,” she notes. “Back then, it was all manual.” Rivet then offered to deliver the results personally. “For the first year, I did it directly because our chairman, Alfred, was uncomfortable,” she recalls. “Now the chairman and I do it together.”

It’s not always been an easy process. “We’ve had to let go of two CEOs,” Rivet notes. “Those can be hard discussions. But if you’re doing it right, the CEO should know every quarter what’s working and what isn’t. When you do a performance review, there should be no surprises.”

And Rivet is a big believer in no surprises. “You want to be transparent in your thinking,” she says. “Say it’s a year where you’re not going to have any bonuses because the economy is in a downturn. Or it was a hurricane year. How do you tell people the news? We spend a lot of time talking about that, because if you say everything’s hunky-dory, that doesn’t work.”

Rivet has helped Schwan’s make some key strategic decisions. She was vocal in her opinion that Schwan’s should exit international markets and instead focus on domestic expansion, particularly in its direct-to-home delivery offerings. This idea wasn’t popular with company executives who’d built up that international business. Still, Schwan’s did sell many of its overseas holdings, and the strategy seems to be paying dividends. Today, the company employs 15,000 people nationwide and has revenues of close to $3 billion.

“I’ve been on many boards. There are some people who sit there and don’t say anything, or do anything: they’re just there to say they’re on a board. Others speak up and contribute. Jeannine is big on contributing and getting to know the business,” says Schwan chairman of the board, Al Schuman, who is also chairman emeritus at Ecolab, Inc. The current Schwan’s board has been together for many years, and built a strong sense of trust. In such an environment, new thinking can be aired and considered. “You need different perspectives and different dialogues, and then you can identify what might be best,” Rivet says. After all, she adds, “We’re there to open up and listen, and be willing to modify positions. If you’re all agreeing, you don’t need a board.”

Rivet likes to mix things up with her service, serving on academic, nonprofit, and for-profit boards—“I enjoy the balance”—and has found some commonalities among the experiences. “The business operating principles aren’t any different. How you treat people, how you develop your strategy, how you execute against that, how you balance your top line and your bottom line and where do you spend your capital? All of the issues are the same, no matter the organization.”