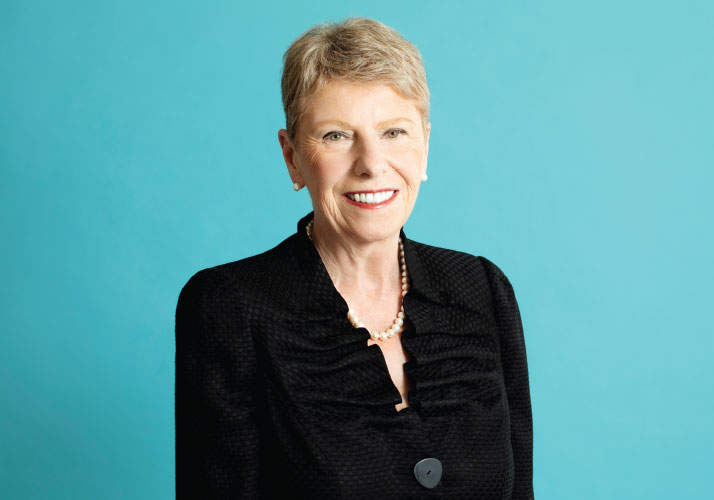 Jeannine Rivet acknowledges: “I am not shy, as you can probably guess.” If she had been shy, she would not have carved out a 28-year career as an executive at UnitedHealth Group, which generated $226 billion in revenue in 2018.

She retired from UnitedHealth last summer after working for many years as an executive vice president of the corporation. Throughout her tenure, she served as CEO of Optum, Ingenix, and UnitedHealthcare, three of the company’s businesses.

She’s now devoting her time to board service and mentoring business leaders.

Her success at UnitedHealth and her reputation as a fully engaged board member translated into numerous invitations to join corporate and nonprofit boards. She said yes to several offers, which led to serving on an array of health care, business, academic, cultural organization, and foundation boards.

Because of her effective leadership, Twin Cities Business is recognizing Rivet for her lifetime achievement of board service.

That’s just a sampling of Rivet’s board involvements. At 71, she still has a passion for board service. She enjoys ensuring that companies are fiscally responsible and accountable to their stakeholders, and she says being on for-profit and nonprofit boards “keeps my brain thinking and forces me to learn new things.”

“She’s very good at communicating how important the mission of the organization is and how the gift can make a difference.” —Peter Moe, director, Minnesota Landscape Arboretum

Growing up in Woonsocket, R.I., Rivet couldn’t have imagined her ultimate career trajectory, as a business executive and respected board member. In a community with French-Canadian roots, she was taught by Catholic nuns in grade school and high school. The nuns outlined her career choices—a secretary, teacher, or nurse. Rivet says she was told those were her options “until you got married and had a family.”

She rejected the secretary option right away. “I thought teaching might be nice, because I liked math and science,” she says. But she decided to use her academic talent to become a nurse. “I thought I would work in a hospital forever,” Rivet says, who earned her registered nurse diploma in 1968.

She began her career as a pediatric nurse, went to Boston College for a bachelor’s in nursing, and rather quickly was put in charge of running the pediatric department in a clinic in Rhode Island. She recalls, “They gave me another department that needed retooling, and the next thing I knew I was managing many of the clinic’s departments.” She had a good manager in Rhode Island who recognized her leadership and administrative talents, and with that support she decided to obtain a master’s in public health from Boston University. That credential, combined with her growing work responsibilities, positioned her for executive roles in health services and health care insurance.

In 2001, Rivet, who was then CEO of UnitedHealthcare, which administers the corporation’s health insurance plans, was recruited to join the Schwan’s board. She agreed to be an independent director for the food company based in Marshall, Minn.

She characterizes it as a time of “growing pains” for both the company and board. Marvin Schwan, the founder and veteran CEO, died in 1993, and the governance and leadership of the business were in transition. She served on the Schwan’s board until 2016.

“There were family dynamics to deal with,” Rivet recalls, and there were some board members who were “good subject matter experts who wanted to manage the business.” On the Schwan’s board and with other companies, Rivet says, it can be challenging for people to stay in the board-member lane. “You want to jump in and fix things,” she says, but she emphasizes that boards need to provide guidance and set directions, and then allow executives to manage the companies.

In her Schwan’s board role, Rivet says, she tried to ask good questions of management, gather information, and always adhere to the business mission, objectives, and principles. “When we would get caught up with emotions,” she says, she would try to focus the discussion to “using the facts to help make the decisions.”

Schwan’s general counsel Brian Sattler worked with Rivet for 11 years of her board service after he became the board secretary. He describes Rivet as “professional,” “prepared,” and “genuine.”

“One of Jeannine’s greatest attributes was the ability to connect,” Sattler says, adding that she could “build the trust bridge among the board, the family, and the company.” Rivet says that when she’s serving on a board, she brings her personal values of integrity, compassion, and relationship-building to the role.

There were several CEOs during that period, and when the board needed to choose a new CEO in 2013, Sattler says that Rivet worked closely with the board chairman and two Schwan family members to identify strong candidates. Ultimately, the board committee recommended Dimitrios Smyrnios, a Nestle executive. “Dimitrios had the right experience and could talk to all levels of the organization, board, and family,” Rivet says, and was able to “position Schwan’s well for growth.” (He remains CEO.)

During much of her Schwan’s tenure, she was also serving on the board of trustees of the Minnesota Landscape Arboretum. “Jeannine is the epitome of an engaged trustee,” says Peter Moe, arboretum director. Rivet chaired a multiyear capital campaign that reached its goal of $60 million. “I don’t think we would have had the same results without Jeannine,” Moe says.

Rivet recalls that when she was originally enlisted to lead the campaign, some people wanted a committee of 40 people. “I raised some questions about the efficiency of doing that,” she says. She told arboretum leadership that she would lead the campaign under certain conditions, which included a committee of no more than eight to 10 people, meetings that started and ended on time, development of specific campaign materials that effectively spotlighted new projects, and careful monitoring of fundraising goals.

In effect, she brought business discipline to an organization that she’s extremely passionate about supporting. “I had to do it in a way that was not threatening, but got results,” Rivet says. “People were open [to a new approach], and they trusted me because I knew them.”

Moe says that Rivet leads by example. “She donates herself first,” Moe says. “She’s very good at communicating how important the mission of the organization is and how the gift can make a difference.” Among the projects funded by the capital campaign were a bee and pollinator center, a conservatory expansion, and a sculpture garden.

Rivet’s husband, Warren Herreid II, also is a strong arboretum supporter, Moe says, and the couple opened their Minnetrista home to host several events, including dinners for scientists and visiting directors from other arboretums.

Rivet is a major advocate for increasing the number of women and people of color on boards.

As someone who has been “the one woman” on a board, Rivet says, “I frequently speak with women who are ready for their next opportunity.”

Holly Boehne, a retired chief technology officer of Andersen Corp., recently was referred to Rivet through a professional colleague because she had shared her desire to secure a corporate board seat.

“I sent Jeannine an email out of the blue,” Boehne says. “I said, ‘I’d love to pick your brain.’ She immediately got back to me.” Rivet took her to a luncheon for the Women Corporate Directors organization, and then volunteered to critique the board biography and rÃ©sumÃ© that Boehne was using to market herself.

Rivet told Boehne how to punch up her written materials to emphasize her accomplishments at Andersen, Ecolab, and Pillsbury and coached her on how to strengthen her elevator pitch for board position interviews.

“She’s got a crazy amount of energy,” Boehne says. “Jeannine gave me a ton of confidence. She told me, ‘You are qualified. You are going to be a great board member. You just need to find the right board.’ ” With her business experience and Rivet’s coaching, Boehne landed a seat on the board of First Supply, a Wisconsin–based company.

“She doesn’t waste time. She cuts to the chase,” Boehne says. But she emphasizes the humanity and caring that she observed in Rivet. “You can see the servant-leadership, you can see why people followed her,” Boehne says.

“I didn’t grow up with very much at all,” Rivet says. She recognizes that she had tremendous success on a national level in corporate America. But, she adds, “My father, until the day he died, would introduce me as a nurse.”

Now, she says, “If I can help others in their own personal journey, the mentoring and coaching is a way of giving back and paying it forward.”