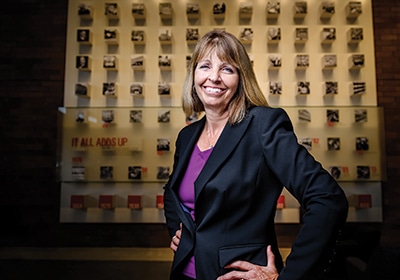 Janel Haugarth became a director for Valspar Corp. in 2007 at just the right time. The 209-year-old Minneapolis paint company was undertaking a major transition, from making store-brand paint to launching its own consumer brand. Its leaders had a multitude of major decisions to make about marketing, retail operations and the other considerations needed to develop this new approach.

As president of independent business and supply chain services for Eden Prairie-based Supervalu, Haugarth knows the retail sector intimately. When she joined Valspar’s board, she could offer advice in accounting, operations and logistics, based on more than 35 years of experience at the grocery wholesaler and retailer.

“The independent grocery channel is very similar to the independent hardware store and paint store that Valspar serves,” says CEO Gary Hendrickson, who was Valspar’s president and COO when Haugarth joined the board. (He was named CEO in 2011.)

In addition to serving on the board’s compensation committee, Haugarth shared her extensive experience in supply chain, sourcing and procurement—crucial insights for Valspar, which was seeking to better coordinate sourcing the components needed for manufacturing paint. This included inviting Valspar’s head of sourcing to visit Supervalu to learn how her employer handles the process.

Making use of Haugarth’s insights, Valspar decided to start its shift with longtime customer Lowe’s, whose American Tradition in-store brand was produced by Valspar. The Minnesota paint manufacturer possessed a strong brand in its industrial coatings business; now the executive team wanted to create the same for its consumer line. After successfully launching the new consumer paint line with Lowe’s, Valspar has expanded into Canada, Mexico, Europe and Australia. In 2012, it purchased the paint-manufacturing assets of Ace Hardware, where it now sells both Valspar- and Ace-branded paint. It is now the top paint supplier to Ace Hardware’s 4,000 retail locations in the United States.

“Janel has experience in retail and understanding that channel strategy, particularly the way independent retailers think. That has been really helpful,” Hendrickson says. “She also helped us think through the brand presentation, the brand strategy and the distribution strategy, especially in the independent hardware channel.”

Haugarth came to Valspar through her first corporate board service at Banta Corp., a Menasha, Wis., printing and imaging company. It was a short-lived but eventful stint from 2005 to 2006, when Banta became embroiled in an attempted hostile takeover. As Banta’s executives and board fought off the effort—ultimately selling to Chicago-based print-services giant R.R. Donnelly instead—Haugarth worked closely with Paul Reyelts, then CFO of Valspar and a Banta board member, who asked Haugarth to consider joining his company’s board.

Meanwhile, during her first decade with Supervalu, Haugarth provided public accounting services to its nearly 2,000 independent retailers, becoming a business advisor to many of them. She then oversaw accounting and finance on the wholesale side before moving into operations. She was named president of the Minneapolis-based northern region in 2000, and appointed to her current position in 2005.

As she has contributed to Valspar, Haugarth says she gained as much as she has given and become a better executive in the process. The experience of learning another industry, listening to business leaders make presentations to the board, and seeing others ask probing questions without putting people on the defensive has helped Haugarth when it’s her turn to go before the Supervalu board.

“As a board member I want to be attentive, to listen and understand before I weigh in with an opinion or decision,” she says. “And I’ve been trying to bring that into my leadership position at Supervalu.”