It has adjusted to the boom and bust of the iron mining industry by adding new services and markets.
April 01, 2020 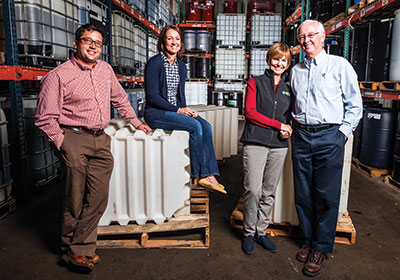 In the early 1980s, Jim and Kathy Hoolihan wondered whether they should move the headquarters of their family business from northern Minnesota to Wyoming coal country.

In January 1983, Jim and Kathy moved to Casper, Wyo., to buy a warehouse and to hire staff. Unlike the taconite business, coal was booming. As Kathy recalls, “We had that conversation several times: ‘Should we even be in Grand Rapids?’ ” She and her husband went as far as to begin house hunting in Casper.

But after about a year in Wyoming, they moved back home. “Both of our families are here, our friends,” Kathy says. “It was just the right thing to come back.” And as Jim notes, the company’s professional support, including its bankers and attorney, were all in Grand Rapids.

Their return is testament to the Hoolihans’ commitment to their hometown. And it’s also a story that Jim Hoolihan believes isn’t well-known outside northern Minnesota—a story of how people and companies adjust and innovate when traditional opportunities shrink.

The Industrial Lubricant story begins in the 1930s. Jerry Hoolihan, a member of the second generation of his family to reside on the Range, took a temporary job after college at the Blandin paper mill in Grand Rapids; not long after being hired, he was let go. “His story was that he never wanted to be laid off again,” Jim Hoolihan says. Jerry joined his friend in an International Harvester truck and implement dealership. A salesman coming through town told Jerry about Whitmore Manufacturing, which made lubricants formulated specifically for the shovels used in the Midwestern coal fields. Jerry convinced Whitmore that there was a need for just this kind of lubricant for the power shovels used in the iron mining industry, and in 1943, Industrial Lubricant opened for business.

2008 – Andy Haarklau, who is married to Jim and Kathy’s daughter Mary Helen, joins Industrial Lubricant as vice president for the railroad business; he’s set to become president in 2016.

After World War II, Jerry’s brother, Dan, joined the company. With money from the GI Bill, Dan had learned to fly an airplane. He bought a 1947 Stinson plane, which would allow him to call on mines out west. “That took the company into the [coal] mines of North Dakota, Montana, British Columbia,” Jim Hoolihan says.

In the early days, the company would simply drop off drums of lubricant at the mines. Starting in the 1990s, it came up with the idea of selling service as well as product—applying lubricant as well as selling it. “We’re providing five service guys at the mines, and we’re not even selling our products to them,” says Jim Hoolihan, who believes this value-added business model will continue to grow, particularly with mines looking for ways to do more with fewer employees. Industrial Lubricant’s employees often function as service technicians to the mines—filling lubrication tanks on a conveyor belt, for instance, or calculating the proper and economical use of lubricant.

Not every idea Industrial Lubrication has tried has succeeded, or at least lasted. About 10 years ago, Industrial Lubricant saw an opportunity to become a distributor of Australian-made dragline buckets, a kind of heavy equipment used in mining excavation. But selling capital equipment, Jim Hoolihan says “was not our core.” He doesn’t seem to have any serious regrets about this three-year foray: “If we didn’t try things, we would be a company going up and down with the Iron Range.” Still, he adds, “that was an expensive lesson.”

A much more successful venture rolled in around 1998. “I’d like to tell you we had a strategic plan to diversify to the railroads,” Jim Hoolihan says with a smile. “But the truth is, a fellow from [BNSF] in Grand Rapids came through the front door and asked if we had a railroad grease.” Hoolihan contacted his Whitmore rep, who replied, “Well, we’ve been thinking about it.”

What the BNSF representative needed was lubricant applied to the rails to make them last longer. In entering this line of work, Hoolihan says the company was able to transfer a mining practice to another industry—namely, supplying lubrication services as well as the lubricant itself. Industrial Lubricant’s clientele now includes Union Pacific and Canadian National as well as BNSF. These customers provide about a third of the company’s business. Mining makes up another third of Industrial Lubricant’s sales, while the remainder comes from a new source—oilfield construction in North Dakota.

For Jim Hoolihan, the importance of service extends beyond his business. He has served Grand Rapids and the surrounding region in numerous ways. He was the city’s mayor from 1990 to 1995; in 2004, he was named CEO and president of the Blandin Foundation. “It was an opportunity to help contribute to the health of the region in a way that I couldn’t do here on a daily basis,” Hoolihan says. During his time at Blandin, day-to-day management fell to Kathy and to Gary Oja, who stepped up from the company comptroller role he’d held since 1990 and brought his technical and finance skills to his new role as president.

Though not a family member, Oja says that he has never felt like an outsider, and that the family values his business insights. “Jim and I have developed a good relationship in that we complement each other,” Oja notes. Hoolihan’s strengths as a salesman and an outgoing leader mesh well with Oja’s CPA focus on business fundamentals.

Oja also praises the family’s integrity and values. “When you’re working for one person or a family business specifically, they may ask you to do things that . . . being a CPA, I would have to question,” Oja says. During his 25 years with the company, “I’ve never been put in the position where I felt that the family has asked me to do something that I could not do.”

Oja will be retiring at year’s end. Taking Oja’s place as president will be Andy Haarklau, who is married to the Hoolihan’s daughter Mary Helen and is vice president of Industrial Lubricant’s railroad business. He joined Industrial Lubricant in 2008 after a career at Twin Cities construction firm Ryan Cos., where he was a project manager. His work in the construction industry introduced him to three-dimensional design and automation, as well as other digital technologies that could translate to the lubrication business. “Knowing that [digital technology] is out there and it can come to our business is exciting for me,” he says.

“We don’t need to catapult into growth,” Haarklau adds. “We want to grow at a manageable, steady rate, and we want to keep looking for the next thing we can do.”

Jim and Kathy Hoolihan are still working out a succession plan for Industrial Lubricant. They received offers for the family business, but the first item on the company’s strategic plan is to remain a privately held, independent, family-owned business, “here for the long term. That’s who we are. That’s our core.” At this point, two of their children are working outside the company, but holding on to it provides “an opportunity to decide.” Andy and Mary Helen had opportunities in the Twin Cities, outside of the business, but they chose to live in Grand Rapids and raise their family in the city they themselves were raised. “So that was a real driver to not sell,” Jim Hoolihan says.

It’s also possible that a buyer would move the headquarters out of Grand Rapids—as Jim Hoolihan notes, Industrial Lubricant has larger operations in Texas and North Dakota. But the business “was an opportunity given to us by my folks,” he says. “It provides an opportunity for helping to create jobs, and to contribute to a community. It provided me the opportunity to be mayor for a few years, an opportunity to go to Blandin. So what we would like to pass on to our kids is that same opportunity.”