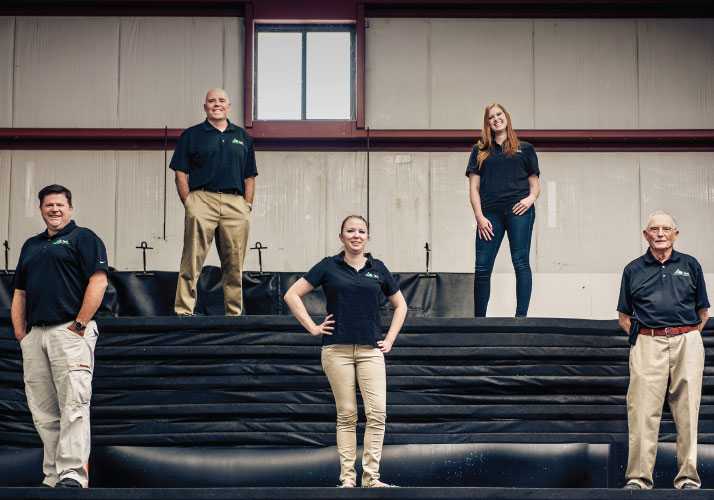 No one grows up dreaming about designing, creating, and installing wastewater covers. But realizing the need created international demand for Lakeville-based Industrial and Environmental Concepts Inc.

In 1989, Mike Morgan had just earned a degree in civil and environmental engineering from the University of Wisconsin-Madison and was working for a plastics manufacturer.

“I had a customer who was looking for a certain type of insulated cover for a lagoon at a meat processing plant in Idaho,” Morgan says. “But the company I was working for had no interest in creating it; they just wanted to sell truckloads and truckloads of materials. They had no interest in a project that was more detail-intensive.”

So, with his father, Bill, whose specialty was finance and human resources, and Sean Gallant, who had just married Mike’s sister, Kim, Mike put together a proposal for the customer, designed to insulate the wastewater in the basin. It took six months of work in the Morgan garage to complete the project; when the customer bought it, IEC was born.

“But doesn’t everybody want to go into wastewater?” Sean jokes. “I can’t think of a more glamorous field.”

That original lagoon-insulating cover is still being produced at the company’s headquarters in Lakeville. In the intervening 25 years, the company has applied for or received five patents for insulated and gas collection covers and various configurations. IEC has completed numerous projects all over the country, from Connecticut to Oregon, and has installed them on every continent but Antarctica, including in such far-flung locations as Afghanistan and Mongolia.

IEC’s products, including that original lagoon cover, are designed to protect the environment. Sean offers as an example a 7,000-head dairy herd near Morris, Minnesota, which has holding lagoons for manure connected to the dairy operation. Because the soil is too porous to protect groundwater from the contents of the lagoon, IEC installs liners made of high-density material to keep the contents from leaching into the soil, and then it covers the lagoon to capture methane and other gases and pipe them where the customer needs them. Morgan says 90 percent of IEC’s customers will burn the methane as fuel.

In addition to protecting groundwater, rainwater that falls on the covered lagoon is contained above the manure and can be pumped off and used for irrigation or pumped, uncontaminated, into a ditch to run into a creek.

“It prevents the farmer from having to deal with a tremendous amount of rainwater at the end of every season that he has to pump and pay to have pumped,” Sean says. “In a nutshell, that’s what the majority of our business is.”

John Thompson, who has worked with the family as IEC’s accountant for years, has nothing but praise for its business savvy and its growth.

Bill Morgan at the site of IEC’s first dairy cover in 2006.

“Mike, Bill, and Sean, with their ingenuity, have built a business that has created a worldwide demand for their product,” Thompson says. “In the last 25 years, the business has created multiple jobs for Minnesota employees.

“It has been very exciting watching a company started in their garage become a leader in technology, with their products used throughout the world.”

A third generation—Stephanie Gallant, Kim and Sean’s daughter—got involved in the family business four years ago. “She’s really become an asset to us,” says her father. “She’s been given projects and things to do that we hand off to her and say, ‘Go and take care of it,’ and she’s done it. She’s become an integral part of the company.”

Stephanie is studying business at the University of Minnesota, and Sean believes that she should work for someone else after she graduates before deciding whether to join the family business.

“I think that provides us with two key benefits: She gets to actually make a decision based on a comparison,” Sean says. “If this is all she’s ever known, it will be difficult to understand what else is out there. After working for someone else for a few years, she’ll come back with fresh ideas and new approaches that we’re not going to think of because we’ve been doing this for so long. It creates a breath of fresh air and a new way of doing things that will benefit the company.”

Sean and Kim’s oldest daughter, Nicole, helps with administrative tasks on a part-time basis. Other family members are likely to jump in at some point too. Mike has a son who is a high school sophomore and two daughters, a high school freshman and a third-grader, all of whom have expressed interest in working for IEC. “But they’re still some years away,” Mike says, chuckling.

Mike and Sean have perfected ways of managing any obstacles that arise when working closely with family members.

“Mike and I hash it out,” Sean says. “When I say Mike and I work well together, I really mean it. I couldn’t ask for a better guy to work with. … There are times when we’ll have a difference of opinion on how things should be done, but there has yet to come a time when we can’t reach an agreement on what our approach is going to be.”

Though the company is predominantly led by the Morgan and Gallant families, sales manager Dave Anderson, who has known the families for 25 years, is also a mainstay. “We rely on him for quite a few decisions within the company,” Mike says.

The Morgan-Gallant clan holds annual board meetings, but Sean admits that when you work with your family, business is never far from anyone’s mind. “When the family gets together for dinner, it always comes up,” he says. “And Mike and I, even if we aren’t in the same room, talk 10 to 15 times a day about various projects and issues.”

They have advice for those who work with their families.

“Fortunately, Mike and I both have that. We don’t let it affect us or get to us personally. It’s business, and you have to look at it just that way.”

A truckload of geomembrane material.