The longtime Minnesota Chamber of Commerce president is remembered for his dedication, humor and ability to bridge divides.
April 01, 2020 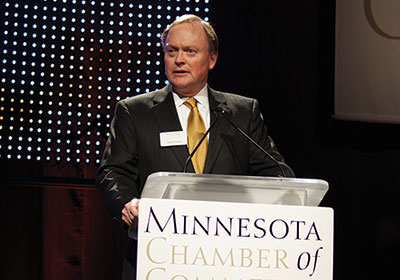 One year ago this month, David Olson succumbed to lymphoma at the age of 57. But his achievements and his dedication to the state’s business community live on, both in existing legislation and the hearts of that community.

President of the Minnesota Chamber of Commerce for 23 years, Olson employed relentless optimism, a drive to better his home state and doses of humor to support and nurture businesses and economic development throughout Minnesota. Whether he was transforming organizations or lobbying for legislative changes to improve the business culture, Olson was steadfast in his belief that all sides eventually would come together to solve problems.

“David had the ability to bring people together through his outgoing personality, his ability to make each person feel special, and his love for his work,” says Joe Swedberg, the recently retired vice president of legislative affairs for Hormel Foods. “He always wanted to do the right thing for the members, the business community, and the state to make Minnesota a better place.”

Olson began his business advocacy work after college, serving on the Greater Minneapolis Chamber of Commerce committee that persuaded the Metropolitan Sports Facilities Commission to build the Metrodome in downtown Minneapolis. He held a variety of positions in business development before joining the state chamber in 1990 as vice president of operations and development.

In less than a year, he was named the chamber’s president. Under his leadership, the chamber became the state’s largest and most influential business advocacy organization. It currently represents more than 2,400 Minnesota companies, 130 local chambers and 65 business trade associations at the Minnesota Legislature and has a retention rate of 95 percent—the best of any state chamber in America.

Olson also was known for building strategic alliances across political lines and for his efforts to visit chambers and businesses across the state. He helped create several workforce development organizations, including Hiring Minnesota Heroes and the school-to-work grant program WorkReady Minnesota, and he served on the Metropolitan Economic Development Agency board, among others.

Olson wasn’t afraid to take controversial stands, even when they divided his own membership. He lobbied persistently for transportation funding increases, culminating in the 2008 legislation that raised the gas tax—a hike many businesses opposed.

“He took on a tough issue and stood tall all the way along, in spite of lots of pushback from people he respected,” says Jon Campbell, executive vice president of government and community relations for Wells Fargo, who worked with Olson on transportation funding bills. “He built a big tent of people who rarely would even talk with each other, and through that eclectic group forged a coalition and ultimate success.”

Perhaps Olson’s most notable success came after he and the chamber spent several years advocating to reform workers’ compensation laws in Minnesota, legislation that finally passed in 1995. It was a difficult struggle. About a dozen companies threatened to leave Minnesota or stop expanding in the state, including 3M, and the Minnesota Chamber was sharply split over the legislation. Using his pragmatic style, Olson persuaded chamber members to back the proposed bill.

As proposals went through numerous iterations, many became discouraged. “David went forward with the same kind of excitement and enthusiasm with Plan R as he did with Plan A, B and C,” recalls Bill Blazar, who served for many years as the chamber’s vice president of government affairs before becoming the organization’s interim president upon Olson’s death. “Every twist and turn was more of an opportunity than a frustration or cause for cynicism. That fundamental attitude made all the difference in the world, and it was a great leadership model.”

Arne Carlson, who was Minnesota’s governor during the battle over workers’ comp reform, notes that Olson’s skills “resulted in people coming together who normally don’t come together, and then they would end up with results.” Carlson also praises Olson’s honesty about what his membership would accept in terms of final legislation. “That built a lot of trust,” he says.

Olson’s talent for fostering that kind of mutual respect is one of his lasting contributions. As Mark Larson, president of Thief River Falls-based Digi-Key Corp., observes, “David’s ability to build strategic alliances and influence public policy—in order to support Minnesota businesses of all types and grow the Minnesota economy—will be an enduring part of his legacy.”