The next generation of leadership opens the door to new opportunities.
April 01, 2020 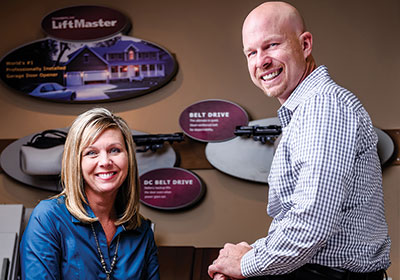 Siblings Jodi and Jeremy Sizer worked in their father’s Coon Rapids-based garage door installation company as kids, sorting nuts and bolts on the warehouse floor. But they never thought of it as a business that they would run one day.

But by 1995, as they were finishing their college degrees, their father, company founder Gerry Sizer, approached them with an offer. He was planning on creating a five-year exit plan and was going to sell the company. But he wanted to give them first dibs if they were truly interested in taking it over.

“My dad basically said, ‘I’ve never pushed you to get involved in the business, and you have to really, really love it to succeed,’ ” his daughter, now Jodi Boldenow, recalls. After several conversations, she and her brother decided to give it a couple of years “to determine if it might be a fit,” she says. “Luckily, we both loved the business and quickly felt passionate about it. It was in our blood all along, but we didn’t know it until we tried it.”

Today they’re building on their father’s successful legacy. The Sizer family business is now the largest commercial and residential garage door installation company in the Upper Midwest. Even with the plunge in business at the beginning of the recession, the company has experienced an annualized growth rate of 11 percent since Boldenow and Sizer took over in 2000. The Sizer siblings also have taken the garage door spring manufacturing division that their father acquired in 1981, and grown it into the largest garage door spring manufacturer in the industry. It now exports springs worldwide, including to Israel, Peru, Colombia, Norway and Mexico.

1977 – IDC moves to its current headquarters building in Coon Rapids.

1986 – IDC expands its product line to include residential garage doors.

The business began in a very fitting place: Gerry Sizer’s garage. After working for a local garage door company, he started his own garage door distribution and installation company in 1974, using his Elk River home as his headquarters. Three years later, Industrial Door Company moved into an industrial building in Coon Rapids. In 1986, IDC expanded its market from industrial facilities to residential garages.

That wasn’t the only growth opportunity Gerry Sizer saw. In the early 1980s, a friend in New Hope owned a struggling garage door spring manufacturer, and Gerry jokingly brought up the idea of purchasing it. After a few conversations with his friend, the idea went from an idle jest to an actual deal. “For about two years, it almost put him out of business,” Boldenow recalls. “But he figured it out, and [the springs business] now represents two-thirds of our revenue.”

In 1998, two years after his two children joined the company, Gerry Sizer drew up a formal succession plan and began gifting them shares of stock in the business. Boldenow and her brother purchased the remainder of the company through a deferred compensation plan; their father then retired to Florida while retaining a seat on the company’s board. Boldenow became CEO, while her brother took on the roles of COO and vice president. When he handed his kids the keys to the company, Gerry Sizer told his children he wasn’t going to watch over their shoulder and that they needed to make mistakes and figure things out for themselves.

They haven’t made many mistakes, but they have faced a number of challenges. The biggest that Boldenow and Sizer have faced as leaders of the company was undoubtedly the Great Recession. For the first couple of years, IDC’s revenue plunged 30 percent. But Boldenow and Sizer saw an opportunity to grow through acquisition, an opportunity that would result in IDC doubling its 2007 revenue in 2014.

“I’d love to say [IDC’s approach to acquisitions] was a great strategic plan, but each one kind of just presented itself,” Boldenow says. For instance, she and her brother received word that there were a couple of competing garage door spring manufacturers whose owners also ran other businesses, and were looking to sell. “The companies we acquired were both situations where a couple of large industry players were divesting of their noncore business divisions,” Boldenow recalls. The two spring manufacturers that IDC purchased would expand its regional market share, primarily in the Southwest and the Midwest.

A more recent acquisition changed IDC’s garage door product mix and branding. “When we acquired [Champlin-based] Automatic Garage Door in 2011, they were a 40-year competitor with a great reputation,” Boldenow says. “How do you meld two competitors that have name recognition in a market? We did a rebranding and product realignment, and marketing campaign accordingly.” IDC became IDC-Automatic Garage Door; though the merger “was a little messy at first,” Boldenow says, as she and her brother blended the two companies’ brands and products, “it has gone well with time.”

What’s next for IDC-Automatic? Succession planning, for one thing. Though her family’s next generation is still young, with their kids ranging in age from 5 to 19, Boldenow and her brother already are thinking about how to prepare them for succession—if indeed they want to do so. In fact, they have some basic ground rules in place. First, anyone interested in running the company must spend time clarifying their strengths and skills to find the role that would best suit them. Then they need to acquire a bachelor’s degree and work outside the family business for at least three to five years in a variety of roles with proof of responsibility.

“In some ways, I wish Jeremy and I would’ve worked elsewhere before entering the company,” Boldenow says. “We may have come more equipped and would’ve been able to cut our teeth and make our rookie mistakes outside the family business, but it has worked out wonderfully well nonetheless.”

If and when family members decide that they wish to join IDC-Automatic, they’ll be able to apply only for open positions and they must compete against other candidates. Once they’re in, they have to hold at least two different roles or get two promotions before they can move into leadership. Then it’s time for a talk: Do they want to be an employee (managed by others), a shareholder or a board member?

Those discussions are several years down the line. And there’s another option for IDC: Sell it. Boldenow said they’ll exercise that option should no children show interest in ownership.

For now, Boldenow and Sizer have their eyes trained on their own business goals, including a five-year plan to hit $100 million in revenue through acquisitions and expanding their company’s geographic reach. IDC-Automatic most recently opened a garage door spring manufacturing facility near Dayton, Ohio, that leads the company in growth.

At the same time, Gerry Sizer’s children continue to build a business that reflects their values, including a promise of no-questions-asked satisfaction to the customer. “We are a great customer service company,” Boldenow says. “We hire by it, we fire by it.”

That said, she and Sizer also emphasize employee satisfaction. Each year, IDC-Automatic shares 5 percent of its profits with its employees, some of whom have been with IDC for decades.

The practice of treating people right also extends to vendors. Katy Slater, sales manager for Maple Grove-based Painterati, which handles finishing and finishing maintenance for IDC’s garage doors and higher-end products, says the company always communicates its appreciation and gratitude to both her and the customers they serve. “IDC believes their customer’s experience goes much beyond just their reach,” Slater says.

You can hear a real note of gratitude from the children whose father gave them this opportunity to run the company he started, and the chance to succeed on their own. “Our mission statement is ‘To open doors for others,’ ”

Boldenow says. “One meaning of that is literal. But even more importantly, we’ve been given this business through the grace of God. I’ve had the good fortune of working with the most amazing people, and our job is to provide personal and professional growth to them.”