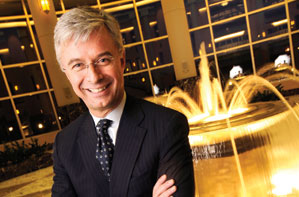 In taking over the top spot of the Carlson empire from Marilyn Carlson Nelson (daughter of founder Curt Carlson) last March, Joly has had to preside over job cuts and flattening markets in travel and hospitality.

Born and raised in France, Joly moved up after four years as CEO of the Carlson Wagonlit Travel unit, during which sales there more than doubled. He doesn’t appear to be intimidated by taking over what for 70 years has essentially been a family business—nor by the forbidding economic prospects.

“A number of our divisions show strong numbers, and we intend to be bullish about the medium term,” Joly says. “If you believe the world economy is going to continue to grow long term, the categories in which we operate are good categories.” He cites Belgium-based Rezidor Hotel Group in Europe (Carlson owns about 40 percent), whose first-half revenue rose 7 percent; and Carlson Wagonlit Travel, whose revenue climbed 16 percent.