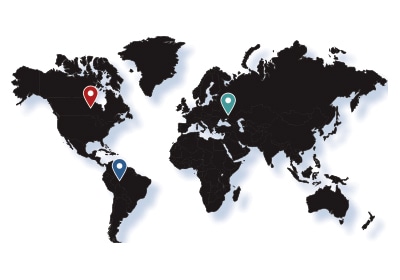 Toovio is a small start-up company based in a brick-and-timber building in the Warehouse District of downtown Minneapolis. A poster with the motto “Innovate or Die” hangs on the wall. The company, founded in 2010, has just six employees. But its customers—large providers of pre-paid wireless service—are primarily based in Central and South America.

How can a small operation do business on such a large, global scale?

Toovio has tactically tapped a mix of vendors and mentors to build its company, which offers business-to-business marketing software that sifts through tons of metadata to send highly targeted marketing offers based on customer patterns using pre-paid wireless service.

“We’re a big-data company,” says Josh Smith, CEO and co-founder of Toovio. “We profile the past and apply it to the future.”

One important connection for Toovio has been working with business mentors through the Minnesota Emerging Software Advisory group, which has a mission to bolster the state’s software industry. Smith credits Toovio’s MESA mentors Jim Moar and Todd Krautkremer with helping the company refine its focus to targeting the pre-paid wireless industry. Toovio pays a nominal fee for the mentoring service.

Define what you do well

“We were doing too many different things. When resources are finite and time is a factor . . . you can only do one or two things great. And really you should try like hell to make it one,” says Smith. “Every time I sit down with Jim, that’s what it’s about. Is that second one really important? What is the one thing that you need to do in the next month?”

Smith declines to disclose Toovio’s revenue, but says that he’s expecting the company to have positive cash flow by the end of the second quarter, which will be a milestone for the startup. Smith is grateful for the counsel of experienced entrepreneurs who have built their own companies.

“We don’t know what we don’t know. We’re not sure what challenges are going to come with the next plateau,” Smith says. “It’s a strategy mentorship.”

Moar, who recently retired as CEO of St. Paul-based OptiMine Software, says that he’s enjoyed working with Toovio. Before agreeing to work with a new startup company, the nonprofit weighs whether young CEOs are truly “mentorable.” Moar adds: “It’s essentially ‘Will they listen?’ ”

Moar says that Smith has brought an open mind to the process.

“I think the world of Josh. . . . He’s got a strong desire to succeed with Toovio,” Moar says. “He does take counsel. He is very willing to listen to input. He’s also whip-smart.”

“We’re a startup. We can design the solution, but we need someone to actually build it,” Smith says.

Coherent Solutions writes the code and builds Toovio’s software. Although Coherent’s headquarters are here, the company’s development center is on the other side of the world, in Minsk in the Republic of Belarus.

Rob Duff, chief operating officer for Coherent Solutions, says that his company has a staff of about 25 in the Twin Cities, but has 350 people working in Belarus. The labor costs in the Eastern European nation are about 35 to 40 percent of what comparable work would cost in the United States, Duff says.

“They use us as their outsourced development arm,” Duff says of Toovio. He adds that customers can interview Coherent staffers to make sure that they have the necessary technical skills. Working with Toovio has gone well, he says. Coherent has three employees in Minsk who are dedicated to working with Toovio.

“It’s gone great. They’re a very easy customer to work with. They want to get stuff done,” Duff says. “They really treat our guys like peers.”

Smith, 34, is originally from Columbus, Ohio. Co-founder and chief operating officer Roshan Bhatnagar, 36, is from Chicago.

Smith says that the local business community can be challenging for outsiders to crack: “Minneapolis is an interesting place,” Smith reflects. “The Scandinavian sort of culture and mindset, the bad part of it is that it’s a little hard to break through sometimes. But once you’re able to do it, there are resources here.”

Toovio has been bankrolled largely by money from the founders, but Smith notes that Minnetonka-based Signature Bank provided a line of credit through an SBA-backed loan in 2013. “Those guys are heroes. Signature Bank really filled a gap for us at a key time,” says Smith, who did not disclose the amount of the loan.

Smith says that Toovio also turned to Minneapolis-based law firm New Counsel, who bill themselves as “attorneys for entrepreneurs and technology,” to hammer out necessary legal agreements. Looking ahead, Smith is optimistic about prospects for Toovio. As he looks down the road, he’s sticking closely to what he’s been taught by his MESA mentors.

“Progress can only come through focus. You can only do one or two things great,” Smith says. “Focus is the only way to progress. And that’s a hard lesson when you’re a young company.”