A good example set by the first generation has allowed the second to carry on the company’s legacy of supporting employees and the community.
April 01, 2020 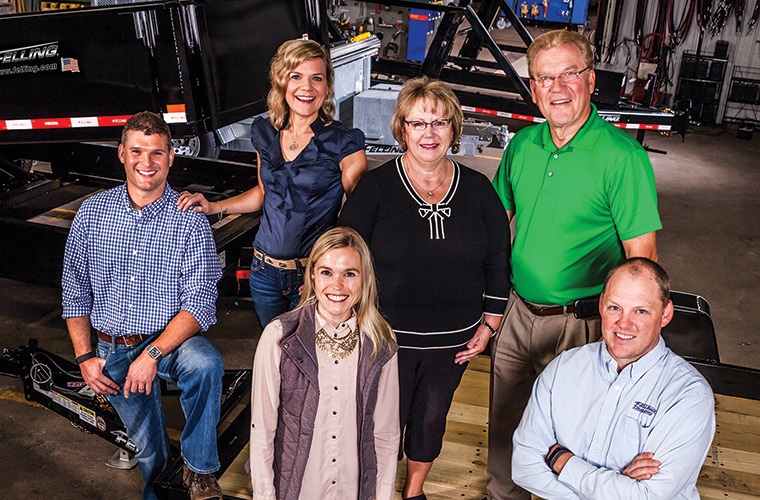 Growing up, Brenda Jennissen and Bonnie Radjenovich learned more than the usual lessons from their parents; they learned the ups and downs of running a business.

“Bonnie and I had the desire to be involved [in our parents’ company], but we knew the amount of stress that happens along with business ownership,” says Brenda. “We grew up with it around the dinner table.”

Brenda and Bonnie’s parents, Merle and Kathy Felling, bought Sauk Centre Welding, a small welding and repair shop, in 1974. Back then, the Fellings and their two employees repaired equipment and did “one-off jobs,” according to Brenda. “My dad saw some trailers coming through the shop that needed repairs,” she says. “He thought it was shoddy craftsmanship, so he designed a trailer on his own and then he started making them. Word got around that he made a great product, and [Felling Trailers] was born from there.”

Today, Felling Trailers manufactures more than 5,000 trailers annually. The company builds trailers for a variety of equipment, from lawn mowers to large excavators for construction sites. “If it needs to move from point A to point B, we can probably make a product for a contractor to do that,” says Patrick Jennissen, Brenda’s husband and business partner.

Located at the intersection of Interstate 94 and Highway 28 in Sauk Centre, Felling Trailers has grown to 261 employees and is now owned and operated by the Felling daughters and their husbands, Patrick Jennissen and Paul Radjenovich.

“We knew that if we came back [after college], we wanted our significant others to be involved, and it just happened to work,” says Brenda. While attending the University of St. Thomas, “we both fell in love,” she recalls. “And our husbands had really fantastic, complementary talents to the business’ needs.”

Paul joined the company in 2004, Patrick in 2007; both started in the parts department. Bonnie came on board later in 2007 and Brenda in 2011. “Bonnie and I worked behind the scenes before officially joining the payroll,” says Brenda. “We were constantly talking about where we wanted the company to go.”

The Fellings, Jennissens and Radjenoviches had numerous discussions about the future. “We wanted to take selling trailers to the next level, continue to grow and continue the legacy,” says Brenda.

Merle and Kathy Felling retired in 2011, though they remain chair and vice chair, respectively, of the company board of directors. Brenda, Patrick, Bonnie and Paul took over operations after the Fellings’ retirement.

“Merle and Kathy have a great entrepreneurial spirit and drive that have helped propel the company to national prominence in their industry,” says Jean Massmann, a CPA at BerganKDV in Bloomington, who has worked with Felling Trailers for 15 years. “It has been fun to watch their daughters and sons-in-law effectively transition and take the reins. They are all very smart and capable leaders who have a compelling vision for the future. I’m also impressed with how they make family time as important as business time. This strong family philosophy carries over into their support of the community and their employees.”

“People are always asking us, ‘How can you work with your spouse?’” says Brenda. “For Bonnie and me, we don’t know any different. Our parents have always worked side by side. They’ve really been a wonderful example to us in how you work together in home life and be a good partner and a good parent.”

While the four have their own offices and an individual area to oversee, they come together for biweekly “traction” meetings. “We know it’s for the overall good of the company, and it just meshes,” says Brenda.

The traction meetings allow company leaders to bounce ideas off of one another using the Entrepreneurial Operating System for Small Businesses, or EOS. “We’ve used the concept for the last five years,” Brenda says. “It focuses on where you want your company to be in 10 years, and to get there, where you will [need to] be in three years. We break it down by quarter, and we call the quarters ‘rocks.’ Each quarter we have certain rocks [that we are in charge of], and we meet biweekly to discuss our progress on the rocks.”

The traction team includes the Jennissens, the Radjenoviches, CFO Jay Abraham and vice president of engineering Kyle Wald. In addition to regular executive and department meetings, the company has a day-long off-site strategy meeting each year.

Besides growing the company, Felling Trailers has always focused on giving back to the community.

“I have to tip my hat for that to Merle and Kathy,” Brenda says. “Since we were little, they were always challenging others to give and contribute in philanthropic ventures, both as a family and as a business.”

For example, Brenda says, her parents never charged any local church for a job; any repairs were done pro bono, and Felling Trailers continues that tradition today. The business donates both money and pro bono work to Holy Family School in Sauk Centre and it sponsors a yearly Mardi Gras celebration for the central Minnesota chapter of Catholic Charities, auctioning a popular trailer model to raise money for the organization.

Felling is also in its fifth year of sponsoring Trailer for a Cause, in which it selects a charitable cause to support and builds a trailer specifically for that cause to be sold through an online auction. This year’s cause is the Special Olympics Minnesota: Felling is building a trailer, painting it red and adding the organization’s logo; 100 percent of the winning bid will be donated to the association.

Felling has auctioned trailers for the Pancreatic Cancer Action Network, the American Brain Tumor Association, the Paynesville chapter of ACT on Alzheimer’s and Bright Pink, an organization that focuses on education and prevention of breast and ovarian cancers. The company sponsors fundraisers for the Eagle’s Healing Nest of Sauk Centre, which works with veterans who are healing from unseen wounds, and it also hires some of those veterans, Brenda says.

“They take a class here, and we have a curriculum that we teach in addition to the high school teachers,” Brenda says. “Then they’re paired with someone on-site. It’s a win-win.”

All four cite Merle and Kathy Felling as continuing influences in their work.

“When Paul and I started, he ended up sharing an office with Merle,” Bonnie says. “I was with my mom, Kathy, for three or four years, and when she moved out, I got my dad, and Paul got his own office. I’ve always been learning from them. When you rub shoulders every day like that, you learn quite a bit.”

The example set by the Fellings is apparent every day, Brenda says. “It’s not lost on us, the importance of doing well for this business,” she says. “Our legacy allows the community to benefit, along with our customers and employees and suppliers. It’s important to be good stewards.”

Felling Trailers has grown to 261 employees.

1985 – The Fellings relocate the shop to the intersection of Interstate 94 and Highway 28 in Sauk Centre.

2004 – The Felling’s son-in-law, Paul Radjenovich, joins the company, working in the parts department.

2007 – The Felling’s other son-in-law, Patrick Jennissen, joins the company, followed by their daughter Bonnie Radjenovich.

2011 – Brenda Jennissen, the Fellings’ other daughter, joins Felling Trailers. Merle and Kathy Felling retire; their daughters and sons-in-law take over the business.