She finds and polishes the “diamonds inside of people.”
April 01, 2020 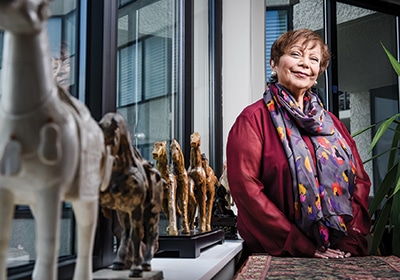 You could say that Richard Copeland was a diamond in the rough. Right now, things are shining brightly for Copeland and his Fridley-based construction and trucking companies. But he’ll admit that when he started out, he needed a little polish. And that’s what he received from Esperanza Guerrero-Anderson.

In 1985, five years after Copeland founded Thor Construction, his company was struggling. Its annual revenue was less than $84,000. Suppliers and subcontractors weren’t being paid and were starting to file judgments against the firm.

Seeking help, Copeland turned to the Metropolitan Economic Development Association (MEDA), which provides consulting, training and other services to minority business owners. It was there that he met Guerrero-Anderson, then the organization’s president and CEO.

“She’s tough and she’s aggressive and she’s smart, and she took a liking to me and saw that I had some raw potential,” Copeland recalls. “I came up through the [construction] trades. I played hard and I worked hard, but I wasn’t a businessman.”

Guerrero-Anderson was a businessperson, and she knew how to help others reach their potential. “I have always had a sense of helping people to succeed,” she says. “I have had this natural kind of way to see the diamonds inside of people”—even before the people know they’re there. “It has been something that I have done since very early in my professional life.”

Guerrero-Anderson came to Minnesota in 1978 during a time of tumult in her native Nicaragua. After serving as MEDA’s president and CEO from 1985 to 1989, she was CEO of the Minneapolis-based Milestone Growth Fund, a venture capital firm targeting minority businesses, from 1986 until 2006. She now runs her own management consulting firm, Edina-based Guerrero-Anderson Inc.

For Copeland, she provided more than business guidance. “She put me into an etiquette class,” he recalls with a laugh. “I used to have a ponytail. She made me cut my hair. I used to be really aggressive and confrontational. She said people don’t want to work with people like that.” Copeland says that these lessons were important for him as he was trying to build his business. Guerrero-Anderson taught him “a lot of the soft skills that you don’t normally get from a business mentor.”

Copeland trusted Guerrero-Anderson enough to follow her advice, and that’s an important first step in any mentor-mentee relationship, she says. “It’s easier to hear advice . . . because there’s a relationship that is based on trust and the willingness of the mentor to help you.” Guerrero-Anderson says. “And you as a mentee are also willing to be helped. The level of trust is essential.”

A few years after they first met, Guerrero-Anderson helped Copeland land a loan of approximately $150,000 from the Milestone Growth Fund, which he says was essential to saving and building his business. Thereafter, Thor picked up subcontracting work with M.A. Mortenson Co. and did so well that in 1995 the two firms formed joint venture relationships, beginning with public housing projects. Since then, the two have worked together on more than $1 billion worth of projects including Target Field, TCF stadium and the new Vikings stadium.

Copeland now operates two businesses, Thor Construction and Copeland Truc-King, employing a total of 250 people, and he expects their combined revenues to approach $200 million this year. (He is the sole owner of Thor Construction and owns 60 percent of the trucking company.) Thor Construction is the only Minnesota business to make Black Enterprise magazine’s list of the 100 Largest Black Businesses nationwide.

Guerrero-Anderson continues to provide help in a variety of ways. In addition to her consulting work, she teaches in the executive MBA program at the University of St. Thomas and remains active in board service, including the Minnesota chapter of the National Association of Corporate Directors. During her career, she has mentored more than 50 people. Along the way, she has picked up insights that can benefit others who become mentors.

One is that it’s important for mentors not to dictate a specific path for a mentee, but to help a mentee achieve his or her own goals. “You have to respect where the person wants to go,” Guerrero-Anderson says. She also believes that mentors are meant to work with people at a specific time during the arc of their careers—at a time in the mentor’s life when he or she has “something to bring to your attention, to inspire you and guide you. But it’s not a forever relationship.”