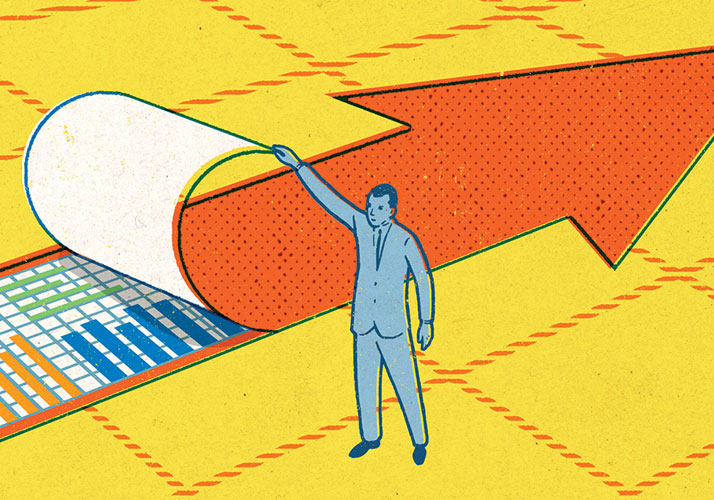 As the infographic lower down shows, Minnesota’s place on Fortune’s list of the 500 largest companies in the country has been extremely dynamic.

This turnover is eye-opening to many, and in some ways it is understated. A number of Minnesota companies entered and exited the 500 over the past 25 years. In other ways, the turnover is exaggerated because Fortune redefined the 500 in 1995. Before then, companies such as financial institutions, retailers, and transportation companies were not considered. When the list changed, many companies joined, and many smaller industrial companies left the list.

Though the list itself is significant, its meaning is more nuanced and worthy of exploration.

What does it mean?

The stability in the overall count reflects the region’s continued prominence as a headquarters economy. We have one of the highest concentrations of large corporate headquarters in the country in raw numbers, and an especially high concentration of headquarters per capita. In addition, these headquartered companies compete in a diverse set of industries.

The turnover in the makeup of this list highlights the dynamism of this headquarters economy. Almost every time a headquarters leaves, it generates discourse and anxiety: Can the region sustain its economic vitality? However, the fact that the overall count remains fairly constant means that we have added as many large headquarters as we have lost. And many companies that have left the list continue to operate in the region (see Delta Air Lines)—some with operations that are larger than when they were on the list. Many regions have not been this fortunate.

What does the future hold?

A safe prediction is that many of the companies on this year’s Fortune 500 list will not populate it in 10 or 20 years. This is not a pessimistic assessment of our future. Rather, it reflects the reality that there is turnover of large companies in functioning free-market economies. For this reason, focusing on the loss of headquarters is an imprecise and potentially misleading measure of economic vitality. A more informed assessment of our regional vitality should consider three questions with respect to the roster of large headquarters.

1) To what extent do we replace the companies that we will inevitably lose?
The roster of the companies from the region and the diversity of their economic footprint suggest continued strength.

2) When headquarters drop from the Fortune 500, what happens to the operations and the talent?
In some cases, dropping from the list is more a loss of bragging rights than a substantive change. Medtronic’s corporate headquarters moved to Ireland, but the continued role of its operational headquarters in Minnesota is a case in point. In other examples, it is important to assess what happens to the talent when we lose a Fortune 500; for instance, many skilled employees at Northwest did not move to Atlanta with Delta’s headquarters consolidation. Instead, they moved into jobs at other headquartered companies in the metropolitan area. This movement of talent between companies within a region is key to sustaining a headquarters economy and regional resilience.

3) To what extent do the continuing companies on the list evolve?
The companies that remain on the Fortune 500 from 1993 do not look the same as they did 25 years ago. Many have been deliberately reshaping and growing their businesses. Had these companies not been actively evolving, and sometimes reinventing, they would have ceased to be on the list. Their continued presence on it sometimes hides their dynamism.

A healthy economy is one that is not stagnant. The turnover in the makeup of the Fortune 500 from our region provides evidence of our headquarters economy’s dynamism. It also reinforces the need for this dynamism to continue, if Minnesota companies will continue to populate the Fortune 500.

The total number of Minnesota-based companies on the Fortune 500 list—which ranks publicly traded U.S. companies by revenue—has remained remarkably stable over the past 25 years. The 1993 list had 18 Minnesota companies; the 2018 roster lists 19, but Plymouth-based Mosaic Co. is relocating to Florida, while Eden Prairie-based Supervalu’s pending sale out-of-state would bring the count to 17.

But only five companies on the 1993 list remain today. Minnesota’s largest public company, Minnetonka-based UnitedHealth Group—now ranked fifth on the overall list, larger than Amazon.com—didn’t even make the list 25 years ago. Back in 1993, General Mills was larger than Apple Computer.

Some companies (Honeywell, International Multifoods) fell off the state listing because they were acquired by businesses based elsewhere. Some moved to other states (Cray, Bemis), while others moved their legal headquarters overseas for tax reasons (Medtronic). Jostens went private and was later sold to an out-of-state firm. H.B. Fuller, Deluxe, and Toro remain significant independent Minnesota-based companies, but are no longer large enough for the list.

By revenue, two additional Minnesota companies would make the Fortune list: Cargill, which is privately held, and Medtronic, whose operational headquarters remain in Minnesota. —Burl Gilyard

Myles Shaver is professor of strategic management and entrepreneurship at the University of Minnesota’s Carlson School of Management, where he holds the Pond Family Chair in the Teaching and Advancement of Free Enterprise Principles. His book Headquarters Economy: Managers, Mobility, and Migration, which documents the drivers of Minneapolis-St. Paul’s headquarters economy, will be released this fall.