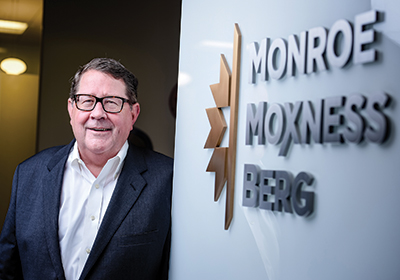 For three decades, attorney Dennis Monroe worked with Nystrom Inc., a Brooklyn Park-based supplier of residential construction products and services. It’s a company he feels close to, and he has helped the family-owned firm weather many challenges. Three years ago, Monroe helped Nystrom manage a major transition: finding a new CEO when Scott Sustacek resigned in May 2012 after nearly 12 years in the position.

It was perhaps the most crucial decision the company’s board has had to face. Indeed, Monroe believes that finding the best person to run a company is a board’s No. 1 job. And luckily for Nystrom, Monroe had the experience to help the company make the right decision.

Monroe’s connection with Nystrom began in 1992, when James T. Nystrom, an attorney in San Diego, inherited the company following the death of his father, founder James C. Nystrom.

“The company was not in great shape, so Jim hired a turnaround firm [Eden Prairie-based Platinum Group], who suggested Nystrom use me for legal advice,” Monroe recalls. As co-founder and chairman of Monroe Moxness Berg PA, a Minneapolis-based law firm, Monroe has worked with privately held companies, specializing in corporate finance and tax law, since 1980. He has provided legal expertise to companies, both through his law practice and as a corporate director, in structuring mergers and acquisitions, divestitures, valuations, joint ventures, commercial lending and specialty finance transactions.

In 1995, after a decade of relying on Monroe’s expertise, Nystrom invited him to join his company’s board. In 2012, he and his fellow directors had to find someone who could build on Sustacek’s work. “A lot of things needed to be done to get the firm to the next level,” says Monroe, including updating its technology infrastructure.

After a nationwide search, Monroe realized that CFO and COO Sue Thomas was the best person to move the company forward. The other four board members agreed, and she became the new top executive.

Thomas, in turn, has found Monroe instrumental in putting together a compensation plan. “Dennis has helped us align our incentives to meet the needs of the owner and the senior management team that runs the business,” she says. “He has balanced Jim’s needs to grow the company and retain management while motivating the management team.”

That’s not the only way Monroe has helped Nystrom. Thomas notes that the company has grown through acquisitions as well as organically. Along those lines, Monroe has provided invaluable advice related to due diligence and the subsequent optimal organizational structure for the business. “Dennis has a strong legal and tax background, which is invaluable to the company,” she says. “He is very engaged, and he cares about Jim and the business.”

To Monroe, that kind of caring should extend to the CEO. “The board should be there to support the CEO, and if a director can’t do that, he or she needs to decide whether to leave or whether the company needs a new CEO,” Monroe says. “I have left a board because I couldn’t support the CEO. The CEO was divisive. He took sides. There were directors he liked and those he didn’t, and because he was not an owner he had no control over who was on the board.”

Monroe says that for each board he has served on, the owners of the firm were looking for outside advice and expertise to help them run the company. A good director, he believes, needs to find his or her appropriate role and then provide expertise to management solely within that role.

“That’s how you make a difference,” he says. “You need to be prepared. Review all information before each meeting. You need to listen, not talk, which can be hard. The type of person who is a director is typically a pretty forceful person.”