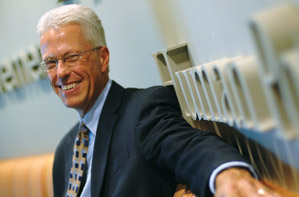 In 1985, Darrell Tukua was a 32-year-old public accountant at what is now KPMG, a global provider of audit, tax, and advisory services. A mentor took Tukua to lunch and inquired about his career plans. Tukua’s reply: retire by age 50. The mentor was taken aback. “Both of my children will be out of college by that time,” Tukua responded, “and I would like to try something completely different than public accounting.’”

Eighteen years later, Tukua retired right on schedule. Within three weeks, he received an offer to join the board of Fargo-based Gate City Bank, where he’d been an audit partner for KPMG. Tukua, who couldn’t serve on for-profit boards while at KPMG, saw board service as a chance to make use of his distinctive skills and experience.

During his accounting career, Tukua had held positions as lead audit partner, SEC reviewing partner, and professional practice partner at KPMG. “If there was any major issue or problem, it came across my desk,” he recalls. “I got to see a lot of different things. I had the chance to work with many different boards of directors, audit committees, and senior management teams.”

Over the next few years, Tukua fielded a number of director offers. “I was selective,” he says. “I was looking for a variety, and I also wanted to make sure I worked with good, honest, very reputable organizations.” One that came out of the blue was Minneapolis-based Capella Education Company.

Capella Education is the parent company of Capella University, an online higher education institution focused primarily on master’s and doctoral degrees. Intrigued, Tukua took a lunch meeting with Capella founder Steve Shank, who told him that he was taking Capella public and needed a strong board member to chair the company’s audit committee and guide the company through the process.

Afterwards, Tukua “talked to two-thirds of the board members and several members in senior management,” he says. “It became obvious very quickly what an outstanding company Capella is.”

The feeling is mutual. “Darrell is a phenomenal audit committee chair,” says Greg Thom, vice president and general counsel at Capella. “His financial acumen is unchallenged. What he’s been able to do in guiding Capella both through the initial public offering process and in the early days of our being a public company has been unequaled. You don’t slide anything by Darrell; he’s on top of everything. He ensures integrity of the process through his meticulous attention to detail.”

Tukua certainly knows his way around a balance sheet, but he’s also good with people. “Darrell is not a person who has a big ego, so he’s able to operate effectively with a variety of people,” Thom notes. “In Capella’s pre-public days, we had a number of venture-cap board members who had their own financial interests at stake, and we had others who were more steeped in traditional education. Darrell was able to play that middle ground and be a great relationship builder because of his good people skills.”

Tukua takes pleasure in putting these skills to work for both for- and nonprofit entities. “I enjoy the ability to watch organizations be successful,” Tukua says. “I enjoy the intellectual engagement from being involved with individuals who are trying to better the situation . . . . At the end of the day, you boil it down to improving the lives of others.”

Tukua currently serves on the board of the MMIC Group, a Minneapolis physician-owned liability insurance provider, as well as those of nonprofits Catholic Charities and Habitat for Humanity of Minnesota.