Because this family understands its limitations, their company has experienced remarkable growth.
April 01, 2020 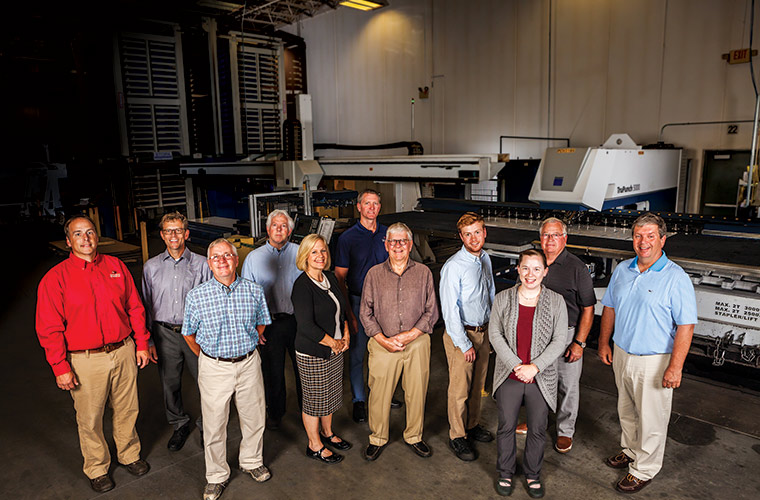 With its 225 employees, two facilities and a global clientele, Bloomington-based metal fabricator Dalsin Industries Inc. remains a family-owned company even though none of the nine family members who work there lead the company.

It’s not that family members haven’t wanted leadership positions, says Diana Dalsin, a third-generation company shareholder. “To have a successful business, you have to have the right leadership in the right place.” And that has meant hiring outside leaders.

The family’s success in finding management talent is reflected in its growth rate. From 2012 through 2016, Dalsin Industries’ revenue has grown 64 percent, driven largely by its foray into a new industry: solar power. That’s in addition to its longtime production of industrial doors and enclosures, medical products, and metal tubes and assemblies for a variety of OEM customers.

The sheet-metal fabrication business that Dick Dalsin and his wife, Eleanor, founded in 1945 operated as a job shop for the first four decades of its existence. In 1968, the Dalsins sold the business to their sons Steve, Dave and Mark. The fraternal triumvirate continued to pursue new opportunities to balance its production cycles, including manufacturing proprietary “snow pushers” for clearing snow off roofs. The company built a strong reputation for its well-designed, well-made customized products.

In the 1990s, with the business continuing to grow, the brothers recognized that they needed to start mentoring the next generation of family leadership. “We realized that if the business kept growing, we weren’t capable of growing the business with our management style,” Steve Dalsin recalls. “The fact of the matter was, [the business] was growing whether we wanted it to or not.” While the growth was a boon, it also presented big challenges.

“We were the whole management team. None of us had the skills to run a bigger operation,” says Steve. “The three of us brothers had never gone to college. We had no formal business education.” And with the employee count climbing, “we needed more sophisticated knowledge about how to manage those people, which we didn’t have.” Business operations also were becoming more complex; Dalsin Industries was no longer a small job shop.

After a couple of years mentoring various members of the third generation, Steve and his brothers agreed that no one was ready to run what had become a larger, more complicated business. There are talented family members working in the business, but “they were engineers or computer people or something like that,” Steve Dalsin says. “They didn’t have business experience.” Working with consultants, the Dalsin brothers decided that the best way to manage the transition of the family business was to go outside the family to hire executives who had more experience.

One of those key outside hires was Mike Einan, whom the Dalsins hired as COO in 1997. Within a few years, the brothers stepped back from the day-to-day operations and appointed Einan as CEO. With the Dalsin brothers less involved, Einan suggested that they form a board. “His opinion was that we should look for people who had specific skills that we didn’t have internally,” Steve recalls. They started with a single outside board member, a former CEO of Minneapolis-based Satellite Industries. In time, Dalsin Industries added board members with expertise in marketing, banking and legal. This broader skill base has helped position Dalsin Industries to take on new opportunities.

About five years ago, Dalsin Industries gained a major new customer: San Jose, Calif.-based solar power components manufacturer SunPower Corp. It has become “a critical part of our business,” Diana says. “In fact, they’re so critical that we can’t live without them.”

Not long after adding SunPower as a customer, Dalsin Industries was building about half of the solar-panel base-mounting systems for a massive solar field in Southern California that SunPower was installing. In the summer of 2012, Dalsin Industries shipped roughly 1,540 semi-loads of components from Bloomington to California. With SunPower promising more business, Dalsin Industries built a second plant in Arizona. The facility, which opened in 2013, manufactures metal products for the company’s Southwest customers.

Dalsin Industries’ current CEO and president, Gary Fruth, joined the company in 2002 after three decades in operations management at Shoreview-based Deluxe Corp. and St. Paul-based Total Tool Supply Inc., and was another key hire. The appeal of joining the family business, Fruth says, was that “the strength of the organization was operations and production management. [The Dalsins] wanted to be a legacy company—a company for the future. They weren’t interested in growing the business to a certain size and selling it.”

The Dalsin brothers don’t work closely with the business on a daily basis, but Fruth says that family members are highly supportive. “It’s humbling the amount of confidence they have, not only in me as the CEO, but our entire leadership team here,” he says. At the same time, “the family members that work here are treated just like any other employee. And that’s the way they want it.”

Though not involved in day-to-day management, Dalsin family members continue to build on the philanthropic activities the founders built into the business. “As a job shop company, you’d never think of formalizing community giving,” Diana says. Though she doesn’t work for the family business, she has been able to put her nonprofit management and community relations experience to work. Twelve years ago, the family introduced a matching gift program.

“There is no focus per se as to where our dollars go,” she says. The idea is to commit a certain amount of money to the budget; it’s currently set at 1 percent of the company’s previous year’s income. For the past two years, the company has asked its employees in Bloomington and Phoenix to suggest recipients.

This past summer, Dalsin Industries began its next transition: establishing the next generation of board leadership. According to Steve, family members need to have broader business skills than they have right now. A board member, he adds, “is not just a watchdog for their stock. They’re there to add value to the company—to add expertise that they can share with the company.”

Finding qualified leadership is one of the challenges that the Dalsin clan will be facing as it moves forward. But thanks to the blend of family and non-family expertise, they’re ready to take them on.

“A business that doesn’t have challenges probably isn’t growing very fast or doing very much,” Steve says. “Our business, from when the three of us had the business back in the ’80s, is totally different. The manufacturing equipment has changed—the close tolerance work, the types of customers we have. And the skills we need keep changing.”

1970 – The Dalsins’ three sons take over the business; two years later, they move the company to Bloomington.

1973 – The business incorporates, changing its name to Dalsin Industries Inc.

2001 – Dalsin Industries establishes a board of directors.

2009 – Dalsin Industries launches subsidiary, Memphis Wood Fire Grills, for the residential market; this proprietary product has posted sales growth of 107 percent from 2012 through 2016.