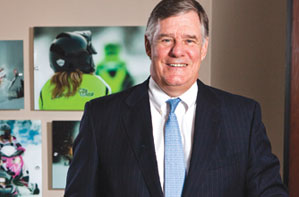 When Chris Twomey visited Arctic Cat for the first time in the spring of 1983, he didn’t want to talk about snowmobiles. He wanted to talk about wooden crates.

As executive director of the Occupational Development Center, a group of workshops in northern Minnesota, Twomey wanted the Thief River Falls snowmobile company, then called Arctco, to give his workshops the business of building its shipping crates.

Twomey got the business for his workshops—and, inadvertently, a new job for himself. He says he took a pay cut to become Arctco’s director of corporate administration. Three years later, he was the company’s CEO. “They gave me an opportunity, and it’s been a great ride ever since,” Twomey says.

During Twomey’s 24-year tenure as CEO, Arctic Cat enjoyed 22 years of profitability, thriving on a base of intensely brand-loyal customers. In 1990, Twomey took the company public (Nasdaq: ACAT). Six years later, he led the company, renamed Arctic Cat Corporation the year before, into the all-terrain vehicle (ATV) business, which accounted for half of the company’s $465 million revenue in fiscal 2011 (which ended in March).

Over the years, Twomey has steered the company over some considerable bumps in the road. A five-year foray into the personal watercraft business was unsuccessful, resulting in a $21.5 million restructuring charge. Ten years of light snowfall beginning in 1997 eventually brought the snowmobile industry to its knees. And the recent recession cut the ATV industry in half, leading to the first-ever losses at Arctic Cat, in 2008 and 2009, and an employee layoff of 12 percent.

But Twomey steered the company back to profitability in fiscal 2010. “Sales this year are up by about $15 million,” he says. “And our profitability will be up dramatically because we’re doing things much more efficiently. We asked our people to do more with less. And they pulled together and did it.”

Arctic Cat lead director Ken Roering, a professor at the University of Minnesota’s Carlson School of Management, describes Twomey as “a roll-up-your-sleeves CEO. He understood the importance of providing strategic direction to the organization, but he’d also be on the manufacturing line, talking with people. He knew a lot of employees by name, and when the need for layoffs came, it was agonizing for him.”

The business that Twomey joined in 1983 was created by employees of the former Arctic Enterprises snowmobile company, which had gone bankrupt in 1981. One of his first jobs was to persuade former Arctic Enterprises vendors and dealers to do business with Arctco. “It took a lot of talking and handholding and explaining to them how we were different,” Twomey recalls. “I had about 500 vendors to call, and the first morning I successfully completed only two calls. But things fell in line quickly after that, because the vendors liked the new team that was bringing the Cat back.”

Twomey calls himself a collaborative manager: “I loved talking about ideas with everybody. And I mean everybody. People could come into my office and talk about anything they wanted to. Some of the greatest ideas for our products have come from our employees and our customers.”

Twomey worked hard on building strong relationships with dealers, vendors, and especially with his employees, who’ve never unionized. “Chris made certain there were profit-sharing opportunities in place, and whenever we needed to fill a new position, we looked inside the organization first,” Roering says.

Employees talked openly at quarterly roundtable meetings. There was no preferred parking or executive entrance. “If you wanted to park in front, you had to get there at 6 a.m.,” Twomey says. “And we all walked in the same door.”

Last summer, the company celebrated the production of its 1 millionth snowmobile, and about 1,000 employees signed their names on its shiny surface. Twomey proudly points out that 29 of the signatories have been with Arctic Cat since 1983, when the employee headcount was only 99.

The first year Arctco was in business, it reached $7.5 million in sales and built 2,755 machines—to order only (a practice still in effect today). John Deere and Kawasaki exited the snowmobile business within two years, leaving Arctco with three competitors: Polaris, Skidoo, and Yamaha. Early on, Arctic Cat committed to continually making significant changes to its product lines.

By 1990, the year Arctic Cat went public, revenues were about $300 million. “We even grew through the 1991 recession because our customers loved our product,” Twomey says. “And we [also] had good snow.”
When the good snows ceased in 1997 and didn’t return for 10 years, Twomey’s drive to enter the ATV business in 1996 made all the difference. While industrywide sales of snowmobiles fell by 60 percent from Minnesota to the East Coast, sales of ATVs climbed. Twomey says that the ATV industry grew for 13 years straight, 11 at double-digit rates. “And we were outperforming the industry in our ATV sales,” he says.

During his last years as CEO, Twomey reduced the number of Arctic Cat dealers by about 25 percent (to 500), with no loss in market share. This year, the company will introduce five new ATVs and three new off-highway vehicles (ATVs with room for a front-seat passenger). In fiscal 2015, Arctic Cat will begin building its own snowmobile engines, ending a 25-plus-year relationship with Suzuki Motor Corporation. The snowmobile engines will be built at Arctic Cat’s St. Cloud manufacturing facility, which has been cranking out ATV engines since 2007. Twomey says that this move will allow the company to better meet regulatory requirements, provide its customers with signature Arctic Cat engine performance, and potentially reduce costs.

Roering says what he most admires about Twomey is that he has “a passion for the business that just never went away. On weekends, he’d be out snowmobiling or ATVing with his managers. He wasn’t one to tell them what to do; he was out there playing with them.”

The past few years, Twomey acknowledges, have been “very, very difficult. But I got a lot of satisfaction from people telling me how they use our snowmobiles and ATVs for family outings—the great experiences they have, the thrill and the excitement. When you can make people happy, and drive profits to make your shareholders happy, business just doesn’t get much better than that.”