A family’s love for its culture’s cuisine launches a successful company—with a little help from Cargill.
April 01, 2020 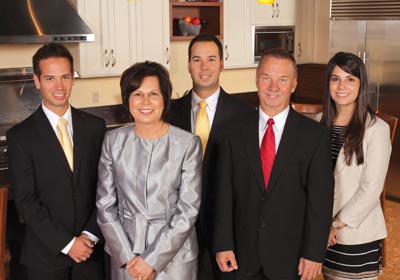 Headquarters: Eagan
Inception: 2005
Family name: Gooch
What it does: Manufactures and sells tortillas for foodservice, retail, and packaged-foods markets
Number of employees: 120
Type of ownership: Private
Principal owners: Cathy Cruz Gooch and Harold Gooch
Number of family members employed by the business: 5
Number of family members on the board: 2
Generations currently involved in the business: First and second

“Are you guys talking about tortillas again?” It’s a question Mike Gooch remembers asking his parents while he was growing up.

Cathy Cruz Gooch and Harold Gooch had a love for the ethnic staple that was evident even to people outside of the family, one that prompted them to start and grow a series of tortilla companies. All that tortilla talk evidently has paid off: The Gooches’ current venture, Catallia Mexican Foods, LLC, employs 120, produces more than 2 million tortillas daily, and has annual revenue that totals about $25 million.

Cruz Gooch, a third-generation Mexican American, grew up with tortillas, and she has since built a multi-generational family business. Over the past six years, all three of the couple’s children have joined Catallia full time after graduating from college: Dan began as a maintenance technician, later moving to retail sales; Annette works in consumer affairs; and Mike, who studied accounting, is corporate controller—a role through which he manages finances and oversees the company’s IT functions.

Mike Gooch had planned to work for an accounting firm for a few years, then bring the knowledge he gained back to the family business. But his father asked him to help out while he looked for a job after college—and he’s been there ever since. “Once I got him in here, I wasn’t going to let him go,” Harold Gooch says. “I built him an office next to mine, pushed all my file cabinets into his office, and said, ‘Let me know if you’ve got any questions.’”

When Cruz Gooch’s parents retired in 1992, they sold the Cruz retail brand. The following year, the Gooches founded Catalina Specialty Foods, originally targeting the foodservice market. Eventually, they decided they wanted more control over the quality of their tortillas, and started exploring ways to stop outsourcing that function in order to manufacture their own products. “We wanted to make the best tortillas anywhere,” Cruz Gooch says. “Ultimately, we wanted to have the ability also to control our own destiny for long-term stability and growth.”

At the time, she was serving on a board with an executive from agribusiness giant Cargill, and Cargill counted among its clients the same major quick-service restaurant chain that Catalina had been serving for more than a decade. When the Gooches inquired about a joint venture with Cargill, they were referred to Dennis Darnell, vice president of business development.

Darnell recalls that Catalina was significantly smaller than the companies Cargill typically partnered with, and Cargill was far more interested in acquisitions than joint ventures, which often required a lot of work for little reward. But he was impressed with the Gooches and saw tremendous opportunity in their products. Aside from the fact that the Hispanic population was rapidly growing in the United States, “this is an ethnic food that crosses cultural culinary lines,” says Darnell. “There is not a restaurant that you can name . . . that doesn’t have a wrap or some kind of a tortilla item on their menu now.”

In 2005, Catalina formed a joint venture with Sunny Fresh Foods (now called Cargill Kitchen Solutions). Sunny Fresh, which saw that tortillas went well with many of its egg-based products, provided seed capital, and Catallia was born. Cruz Gooch is the majority owner, and the five-member board consists of the Gooches, Darnell, another Cargill executive, and a fifth individual appointed by Cruz Gooch.

In 2006, Catallia started manufacturing its own products at a plant in Eagan, and the Gooches have since added production lines as demand has gone up. There are about 50 products in the company’s current product line. Catallia-branded products now are sold to foodservice clients; the company’s retail brand, Frescados, is sold in grocery stores. Catallia also makes tortillas for companies that incorporate them in the packaged meals they produce.

The whole family meets twice a month to discuss business, but they also have lunch together whenever possible. By all accounts, they’ve been very fortunate that they work extraordinarily well together. “All of us respect each other’s job roles and duties but we don’t want to do each other’s stuff,” Mike Gooch says.

The Gooch couple and Cargill have had a similarly smooth relationship. Darnell says that both have always welcomed feedback and been open to new ideas. For instance, Darnell recommended that they hire an operations manager to better manage their fast-growing production area. But at the end of the day, they’re the ones running the business and making the decisions—and Cargill executives respect that.

While there’s no single challenge that stands out to the Gooch family, they note that it can be difficult to manage growth and figure out when to hire additional workers. For example, Mike Gooch used to handle the payroll and benefits in addition to performing accounting and IT management functions. While that was feasible when Catallia employed a few dozen people, it became a much bigger task when headcount topped 100, so the company hired a human resources expert to take over those duties.

Mike Gooch says his parents are keenly aware that Catallia’s workers are a key ingredient in its success, even a part of a larger family, and they go out of their way to express their appreciation. Darnell, who retired from Cargill several years ago but still serves on the Catallia board, notes that the employees, in turn, are loyal to Catallia. Last summer, Catallia’s manufacturing plant experienced a power outage. Not only did the five Gooches show up to transfer perishable products and make sure the equipment was properly turned off, but many other workers, from the production line to administrative staff, showed up to offer assistance.

The couple, now in their 50s, don’t plan to retire soon. But they are working with a consultant on a plan for the kids to eventually take over. Cathy and Harold Gooch feel good knowing that they’re meeting the needs of their customers and fueling the economy. “There are days when Cathy and I sit back and smile and watch the kids go,” Harold Gooch says.