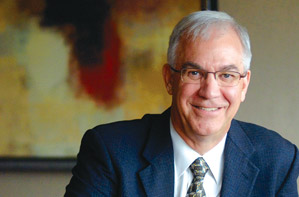 More than a decade ago, when Daniel Johnson and John Haugo needed a smart, experienced board member for MedServe Link, their Web-based health care firm, they turned to venture capitalist and high-tech company CEO C. McKenzie Lewis III. “Mac was not invested in our company,” Johnson recalls. “But he had a broad set of experiences, including having been an engineer at IBM.”

After meeting with Johnson, Lewis accepted the invitation. “I didn’t know health care myself, but I knew quite a bit about online systems and the issues related to accounting for technology companies,” he says. “I was impressed with Dan’s passion for providing online services for the health care industry and his vision for what that would become.”

Lewis was a guiding force on the rollercoaster ride that followed. MedServe Link merged with PointShare in 2000. The technology that would become the core of SearchAmerica was reacquired from PointShare in 2001 while PointShare was being acquired by technology giant Siemens. Lewis helped negotiate the 2001 buyout and coached Johnson throughout the process.

For all seven years of its existence as a private company, Lewis chaired the audit committee for Maple Grove–based Search-America, whose software automates the identification of health care patients who qualify for available financial assistance programs. Another of Lewis’s important contributions was his insistence that the management team run SearchAmerica as much like a public company as possible.

“I think it’s good discipline for a company to have audited financials,” Lewis says. “Either a company is going to go public or will likely get acquired by a public company. The more it has very visible and aboveboard financial records and processes, those kinds of exits become easier to do.”

Johnson took most of Lewis’s advice, even if occasionally it took a while to sink in. “Mac had been an advocate of me hiring a CFO from the early days,” Johnson acknowledges. “I had decided not to do that. Every quarter, Mac would remind me that he had suggested I hire a CFO; the suggestions became stronger and stronger as the quarters went on. Finally, I hired a good CFO, and soon regretted having waited two years to hire one.”

By the time SearchAmerica was up and running, Lewis had already accumulated a wealth of board and management experience. Having built Twin Cities–based Computer Network Technologies from a start-up to an $80 million public company (it’s now part of San Jose–headquartered networking firm Brocade), Lewis left in 1995 and joined the boards of Eden Prairie–based data-storage provider Xiotech, Rochester-based infotech firm ShowCase, and Minnetonka-based identity-validation firm Digital Biometrics, which Lewis helped shepherd through a difficult turnaround. (It has been subsumed into Bloomington-headquartered bio-identity company Level One.)

The SearchAmerica board was dissolved with the company’s sale to Dublin-based credit-data giant Experian in December. Says Johnson: “I feel enormous gratitude toward Mac for helping me grow as an executive over the last 10 years.”

Lewis is on the boards of the Minnesota High Tech Association, local IT R&D firm Adventium Labs, and Iowa high-tech firm MagnaLynx.