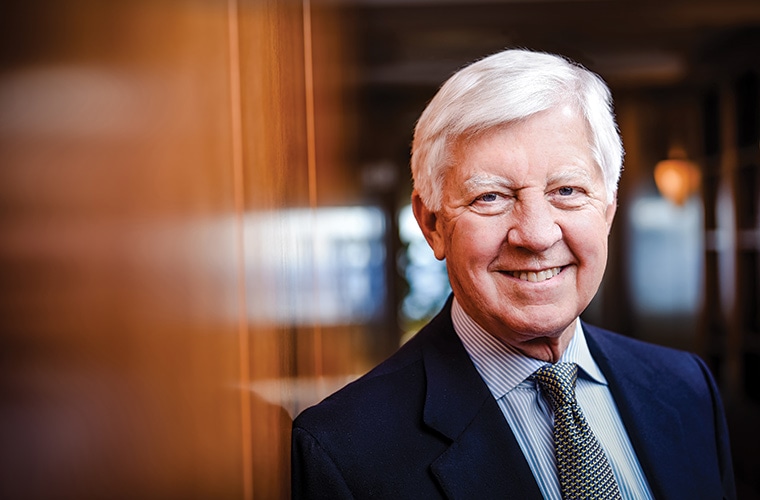 He transformed Medtronic from a midsize heart-device maker into one of the world’s largest med-tech corporations.
By Aaron Keller
| July 02, 2017

Bill George knew that things weren’t quite as they seemed. On the surface, 1998 seemed to embody the culmination of all that he had worked to build as CEO of Medtronic Inc., but behind the scenes something else was occurring.

Then a midsize medical-device maker, based in Fridley, Minn., Medtronic was drenched in awards, both national and local, including recognitions from Fortune and Industry Week. The company’s revenue had grown over 150 percent since 1991, when George became CEO. And from 1996 to 1998, its stock price had nearly doubled, from $13.87 to $26.50.

“The irony was that while we were earning all these recognitions, the growth had really slowed down,” George recalls. “We came to a crunch point, where revenues were growing much slower than our earnings.” The slowdown in growth had come as competitive products entered the markets. At the same time, demand for those products also had slowed. What’s more, he says, “the new products we had in the cycle wouldn’t come to market till 1999 or 2000.”

To George, the decision was stark and simple: “We had to either shrink as a company or be bold and go forward. And we elected to be bold.”

Within about a year, Medtronic spent $13 billion on acquisitions, putting the company into new markets. What had been a successful pacemaker and defibrillator manufacturer became one of the world’s leading medical-technology companies, with capabilities in implantable devices used in spinal surgery, heart surgery and diabetes treatment. As a result, “we doubled the shareholder value in two years, [as well as] the number of employees, and we were on a whole new growth trajectory,” George says. If Medtronic had pulled back, “we would have been acquired by someone else.”

George is frank about what he achieved as Medtronic’s CEO. At the same time, he’s well aware that he and his management team were building upon a solid foundation: His predecessor, Win Wallin, had turned around an ailing company. He also knows he was extremely fortunate.

George joined Medtronic in 1989 as president and COO after careers at two larger firms, Litton Industries and Honeywell. He was driven, but by 1988, he wondered whether he had taken a wrong turn.

“I looked at myself in the rear-view mirror, and what I saw was a miserable person,” George recalls. “On the surface, I had everything going for me, so how could I be miserable? I realized that I was more focused on getting the top job than on the work I was doing. I wasn’t building anything. I was just taking things apart.” He was good at laying people off and shutting down divisions. So the Medtronic mission—restoring people to full life and health—was profoundly appealing.

Named CEO upon Wallin’s retirement in 1991, George had the chance to build something of value to both patients and shareholders. One of his key moves was focusing Medtronic’s already strong development team on bringing new products to market. “We actually cut the lead times on new products coming to market from 48 months to 18 months,” George says. “That changed the entire game because we went from being a technology follower to a technology leader.”

George retired as CEO on May 1, 2001, remaining chairman for an additional year. “I told our board of directors that I didn’t think a high-tech company CEO should serve more than 10 years,” he says. Art Collins, president and COO under George, succeeded him as CEO and chairman.

“Bill inherently understood that to serve more customers—both physicians and patients—you needed to continue to grow,” says Collins, who left Medtronic in 2008, and is now managing partner of Acorn Advisors LLC, a Florida- and Illinois-based consultancy that advises nonprofits and family offices on governance and strategic planning. “And to grow in this business, you needed to continue to innovate and bring new products forward. Bill put together strategies and allocated resources to go down that route.”

Collins notes that George wasn’t a micromanager, and let his talented top managers do their jobs. Among other things, this helped make for a seamless transition at the top, Collins says—and helped continue the average annual compound growth rate of 18 percent that Medtronic had posted during George’s tenure.

Upon his departure from Medtronic, George became a teacher, and has spent the last 14 years at Harvard, his grad-school alma mater. He also has written several books on business leadership, served on several corporate and nonprofit boards and posts regularly on Twitter. He now splits his time between homes in Minnesota and Colorado (he’s currently half-time at Harvard).

But even before George began teaching, he was a mentor and inspiration to others. Chris O’Connell joined Medtronic in 1994, climbing the ladder until 2015, when he was named CEO of Massachusetts-based life science technology company Waters Corp. As vice president of corporate strategy at Medtronic, O’Connell reported directly to George, and credits him as a values-oriented role model.

“What I saw Bill do, and what I try to emulate, is combining good, hard-nosed business acumen with a warmth and a ‘people orientation,’ ” O’Connell says. “Bill took it upon himself to care about people and bring them along, building leadership teams at multiple levels and creating the conditions to help people succeed.”

O’Connell’s career, like Medtronic’s remarkable growth trajectory over the past 25 years, testifies to the very solid, very real legacy that Bill George built.

1942 – Born in Muskegon, Mich.
1964 – Graduates from the Georgia Institute of Technology with a degree in industrial engineering; two years later he earns an MBA from Harvard University, where he was a Baker Scholar (highest honors).
1966 – Named assistant to the comptroller of the U.S. Department of Defense.
1969 – Becomes director of strategic planning for Litton Industries; promtoted to president in 1973.
1978 – Joins Honeywell as vice president of corporate development.
1989 – Named president and COO of Medtronic Inc.; becomes CEO in 1991 and chairman in 1996.
1999 – Acquisitions of several device manufacturers extends Medtronic’s reach into new medical markets.
2000 – Medtronic makes its first appearance in the Fortune 500, ranked 381st.
2002 – Retires from Medtronic; two years later, he begins his teaching career at Harvard Business School.
2006 – Publishes his second book, True North: Discover Your Authentic Leadership.