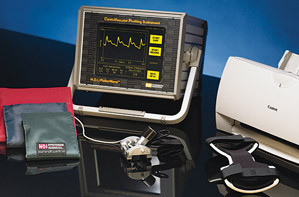 An arterial elasticity test is used to determine the health of a patient’s vascular system. It’s a test that’s catching on in the United States, although it’s been standard practice in Europe since 2007, says Mark Schwartz, CEO of Hypertension Diagnostics, Inc., a vascular device company in Eagan. His company’s CVProfilor Cardio Vascular Profiling System provides an easy, noninvasive way for primary care physicians to assess patient vascular health in the office.

“Our device measures [loss of] arterial elasticity—the precursor for cardiovascular disease, atherosclerosis,” Schwartz says. The aim is to help prevent atherosclerosis before it becomes a problem, he says.

“Cardiovascular disease is a progressive disease,” Schwartz says. In some cases, it takes 10 to 20 years for the symptoms to become evident. “It begins in the small arteries, the capillaries. Our test is able to determine the small artery elasticity. When you can predict it early and treat it early, you’re likely going to prevent 80 percent of the complications that occur in cardiovascular disease,” he says.

But the tests are expensive, must be administered by a cardiologist, and require radiation exposure from X-rays.

The CVProfilor has a dime-sized acoustic sensor that is strapped to the patient’s wrist and adjusted to get the optimal blood pressure wave form showing on the connected monitor. The wrist sensor receives and amplifies the sound wave of the patient’s blood pressure. Stiff arteries are more reflective and therefore have a certain type of wave form, whereas arteries that are elastic with minimal plaque have a less pronounced wave.

The device’s computer gathers wave form data for about 30 seconds and then produces large- and small-artery elasticity index scores. The scores are considered along with a patient’s age and gender to determine if medication is needed or should be adjusted. The test takes about seven minutes, and medical staff can be trained to use the device in about an hour.