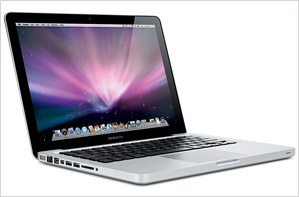 If you want to pay a little more for quality, there’s little disagreement that Apple is the way to go. Apple dominates the market for premium computers. Nine out of ten computers sold in the $1,000-and-up category are Macs, according to an NPG study released over the summer. This year’s big Apple announcements included price cuts on its professional-line laptops, meaning you can now get one without going too far over that $1,000 threshold. Apple added a 13-inch model to its MacBook Pro series this year; and in addition to cutting prices (by as much as $300 on some machines), the company added features, too. Most notable is a new built-in battery that’s good for seven hours of Web browsing on a single charge—40 percent longer than the previous generation. Credit some of that extra power to the energy-efficient LED display screen, which also helped the MacBook earn an Energy Star 5.0 rating and EPEAT Gold status for environmental design. The 15-inch model got a power boost this year, putting its insides nearly on par with the largest 17-inch version. Other upgrades include the inclusion of an SD card slot, something that comes in handy for transferring photos from digital cameras or hacking a Nintendo Wii.