With a do-it-yourself business education, she built a small mail-order company into a global woodworking retailer.
April 01, 2020 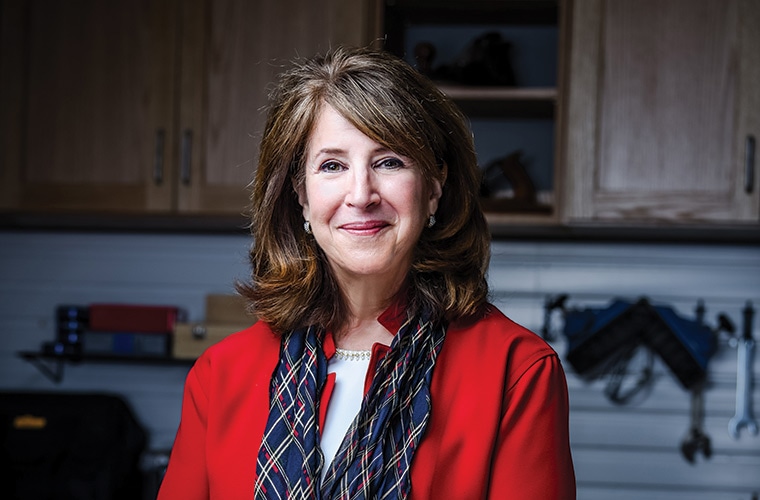 It would have surprised Ann Rockler Jackson’s 18-year-old self to know that by age 24 she would be president of her father’s company. It would have been an even bigger surprise if she’d been told that she’d build it into a $150 million business.

“I originally wanted to be an archeologist or a librarian,” Jackson says. As a student at the University of Minnesota, one of her tuition-paying jobs was at the woodworkers’ supply mail-order company her father, Nordy Rockler, had founded in 1954. Today called Rockler Woodworking and Hardware, the company was a labor of love for her father, who came from a large extended family of furriers. (One of his cousins runs Minneapolis-based L. A. Rockler Fur Co.)

Despite her original dreams, Jackson realized that building her father’s company was the kind of labor she loved. She also realized she had a lot to learn. “When your business is underfunded and you drop out of college after your sophomore year, you end up going to a lot of seminars and joining [trade] organizations,” she says. And the more she learned, the more she thought, “Wow, we could really grow this.”

As she expanded her business knowledge, Jackson discovered that finding new customers was something she was good at. “Our basic products were very good, but I knew we had to get a bigger catalog—more products, more in-depth and much better marketing,” she says.

Jackson’s marketing efforts got a major boost from her brother Gary, a graphic designer who joined the business in 1974. “We had exactly the same goals and feelings,” Jackson recalls. “We also fought. But we were very much best friends.” Together, they created the company’s first mini catalog for prospective customers, most of whom are hobbyists, though many professionals also buy from Rockler.

A few years after Gary Rockler joined, Jackson saw another opportunity—opening retail stores. “People kept calling us out—they wanted to buy product,” Jackson says. “But no one really wanted to wait on them, because it was a distraction from whatever they were doing, [like] filling orders in the warehouse.”

Rockler opened the company’s first retail location on West Lake Street in Minneapolis in 1978. After quickly outgrowing the space, they moved the store to a larger facility nearby on Lyndale Avenue. Stores in Boston, Denver and Seattle followed. “We didn’t have a lot of data,” Jackson says, chuckling. “It was just my brother and me.” After looking at a particular city, “we would say, ‘Wow, this is a great place.’ As the company got bigger and more professional, we got people to help us find locations.” Rockler now owns 36 stores in 21 states, including three in Minnesota.

After establishing a solid retail presence, Jackson turned her focus to e-commerce. In 1997, the company launched its online catalog and e-commerce website. Today, Rockler.com is the most trafficked website in the woodworking industry. Rockler also publishes Woodworker’s Journal, one of the top national consumer woodworking magazines, which has a paid circulation of 135,000.

During Jackson’s tenure, Rockler has developed more than 800 products under its own brand. One of the most distinctive and popular is the Bench Cookie, a high-friction rubber pad that allows woodworkers to grip and elevate the wood they’re working on without clamps. “Our proprietary products distinguish us from our competitors,” Jackson says.

All this has meant even, steady growth over the years. “We’re stable and fiscally quite conservative,” says Jackson. Still, her success has garnered attention. In 1996, the Midwest Direct Marketing Association recognized Jackson’s success with a Long Term Achievement Award for her distinguished service, dedication and outstanding contribution to the direct-marketing industry. It’s just one of several awards she has received. Jackson also has served on several boards, including Greater Twin Cities United Way, the University of Minnesota’s Carlson School of Management’s Undergraduate Advisory Board and DRG, a Berne, Ind.-based media, fulfillment and database marketing company, where she has served as a director since 2013.

“Ann’s leadership at Rockler has been a great strength of having her on our board,” says David McKee, CEO of DRG. “She has built Rockler into quite an impressive company and brand. Ann’s perspective from her own experiences has been very valuable to us, and her advice has helped us develop our own strategic plan.”

Things, however, haven’t always been as smooth as a well-planed plank. In 1987, her beloved brother and business partner died from an illness. “I just threw myself into work because that’s how some people deal with grief,” Jackson says. But she, her family and her business kept going, and growing, even after her transition to chairman in 2015.

Under new CEO Ron Hornbaker (who’s not a family member), Rockler continues to add new products and stores, as well as build out its online sales channels. “Rockler is really becoming more diversified in its customer approach,” says Hornbaker. As a result, he adds, “Rockler is in a great position to continue to grow.”

Jackson acknowledges that the company wouldn’t have grown as much as it has if there wasn’t a large do-it-yourself market. It’s a market that Jackson, an amateur woodworker herself, believes is growing. “Woodworking is hot,” she says. And Jackson, a do-it-yourself business builder, might well be one of the reasons why.