It’s a family company spread across the continent, with a CEO who isn’t a member of the family. Communication is key.
April 01, 2020 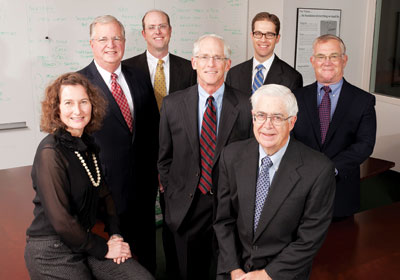 When you have as far-flung a company as AmeriPride, how do you maintain the feel of a family business? Especially when your family is as spread out as the business? You do what any family should do: You keep in touch.

Headquartered in Minnetonka—and perhaps more familiar to Twin Cities residents under its former name, American Linen Supply—AmeriPride has 45 plants and 70 service centers throughout the U.S. and Canada. Outside of its growth, the company has pretty much stuck to its knitting for 122 years: providing linen service, uniforms and apparel, floor mats, restroom products, and other facilities services to nearly 150,000 customers every week. (Starting in the mid-1930s, the company also began to manufacture its own uniforms. AmeriPride now sources its garments and linens from multiple vendors.)

Two fourth-generation family members remain involved in the day-to-day operations of the company. Andrew Steiner, vice president of customer operations, is responsible for improving how AmeriPride interacts with its customers, operates its fleet, and grows its customer base. For example, he and his team are currently assessing the fleet-management program and looking for efficiencies. This has already led to several changes to how the company makes repairs to its fleet, as well as establishing a system that allows AmeriPride to replace vehicles when they are down for repairs.

Andrew’s cousin, Gardiner Van Ness IV, whose title is treasury manager, is responsible for ensuring the smooth flow of funds in and out of the company and makes sure that the payment processes are secure.

Four grandchildren of the founders serve on the company board. They occasionally meet separately from the board if there are any issues or concerns. In addition, there is an annual family meeting in which the entire clan gathers at one location. There, members get updates from the company’s management team. The meeting is primarily informational, but some decisions are made and it is an opportunity for the board and officers to get feedback and input from family members who are not regularly involved.

In a sense, the diversity of familial talents helps keep this widely spread-out business focused on its continuation and its success. There currently are five family members active on the company’s board and in setting its direction:

• Lawrence Steiner is a former CEO of the company and serves on the board’s audit committee.

• Board co-chair Gardiner “Gary” Van Ness brings a strong financial background to the table, having worked for Chicago-based Northern Trust in Chicago for his entire career. He chairs the strategic planning committee. He’s known as a good communicator and helps keeps family members in touch with each other.

• George Steiner has been involved in many small businesses and is well versed in the commercial real estate market; he is active primarily on the compensation committee.

• Bruce Steiner, the most recent family CEO (following his brother Lawrence) is board co-chair. He also works as the liaison between third- and fourth-generation family members.

• This year, another fourth-generation family member, Cammy Van Ness, joined the board.

AmeriPride has faced a few big challenges in the past decade. One was the name change. Over its history, the company has made numerous acquisitions, and in most cases kept the name of the acquired firm intact. In 2000, having decided it made sense to have one name for all its divisions, American Linen and its affiliates became AmeriPride.

It wasn’t a completely smooth transition. Bruce Steiner recalls one longtime client whose contract came up for renewal:“We had to bid like everybody else. But without really thinking about it, we put in the bid as AmeriPride as opposed to American Linen.” Because the client didn’t recognize the new name, “we ended up not getting the contract because they didn’t know who we were.”

Another challenge: succession. When Bruce Steiner prepared to retire a few years back, no family member was yet ready to take his place. The company conducted a long search and interview process to “find someone interested and capable.” Bill Evans had held executive positions at Pepsi-Americas, a Pohlad family company, and so had some familiarity with family-business dynamics.

Evans was “what we needed,” Steiner says. What’s more, Steiner had brought in a number of outsiders as executives, including a CFO, who brought “a breadth of outside experience” into AmeriPride. In a sense, Evans’ way was prepared.

Steiner says there was some reluctance from some family members to bring in an outsider as CEO, but Steiner touts Evans’ “excellent communications skills” as well as his broad business experience.

“There’s a very strong feeling within the family of wanting to maintain the business and be able to pass it on into the next generation, keep it going,” Bruce Steiner says. “But there’s a lot that goes into whether that’s possible, how that’s possible.” Steiner adds that “it really is quite an effort to make sure that everyone that’s out there doing different things is somehow connected and aware and involved at some level, and maintaining a real interest in continuing the business.”