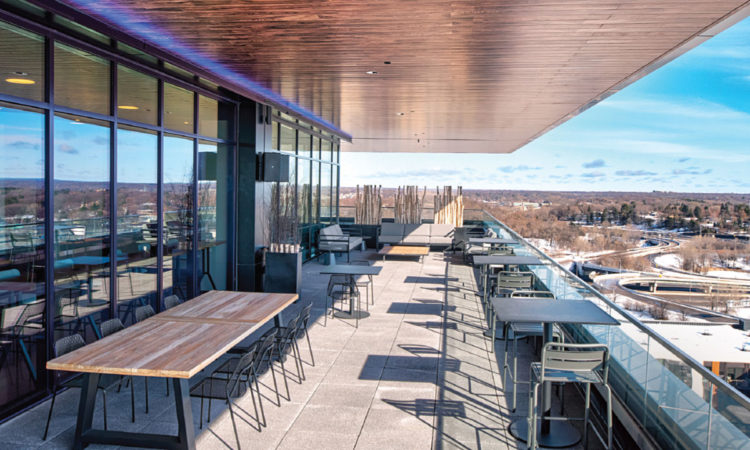 Companies are focused on making their offices attractive collaborative spaces in the post-Covid era, which likely will feature dividing work time between home and the office.
By Burl Gilyard
April 30, 2021

Many white-collar workers have been working remotely, cooped up in home offices and connecting on Zoom meetings since the start of the pandemic shutdowns in March 2020. More than a year later, the world hasn’t changed as much as many hoped it would.

Predictions about getting back to the office have come and gone as many large companies keep delaying their office return dates. Retailer Target Corp., the largest employer in downtown Minneapolis, recently decided to push its return to its corporate headquarters until at least this coming fall.

When Target workers resurface downtown, there will be fewer of them. About 3,500 Target employees will no longer work in the City Center office tower, instead they’ll work remotely or be based out of other offices.

Statistics from the Minneapolis Downtown Council showed in early March that just 16.1 percent of workers were back in downtown Minneapolis.

But sooner or later, companies are going to want to see their employees back in the office. Workers miss the social connections of the workplace, and collaboration, mentorship, and company culture are tougher to foster online. Yet, some aspects of working life may have changed forever. Managers who once feared that employees allegedly “working from home” were just goofing off have suddenly discovered that remote workers can still get the job done. In some cases, they’re even more productive, with no commute and no distractions from chattering co-workers.

Office of the future

But what is the new office world going to look like? The recently completed 10 West End in St. Louis Park, the newest office building in the metro area, offers some clues.

Minneapolis-based Ryan Cos. US, Inc. and the St. Louis Park-based Excelsior Group built the project speculatively, with no signed leases in hand. The 343,000-square-foot project broke ground in October 2019, when the pre-pandemic world was still “normal.” The building is now opening in a whole new landscape.

In talking to prospective tenants, one thing has become clear: “The office isn’t going away,” says Tony Barranco, senior vice president for real estate development for Ryan Cos.

“The workplace is going to need to get smarter. I think it has to get more attractive now to bring people in, because people are very capable and comfortable and have the tools now to work from home,” Barranco says. “There’s got to be a value proposition to come in, and some of that’s going to be culture and everything else, but a lot of it’s going to be the physical space.”

While 10 West End was under construction, Barranco says that developers made some changes “on the fly” with the pandemic in mind. Mid-project they went with touchless systems throughout the building for elements such as elevator buttons and access doors. With tenants more conscious of good air flow in their spaces, developers upgraded the building’s HVAC system.

Safe airflow is a change that many tenants are requiring, Barranco says.

Before the pandemic, office design trends favored cubeless open offices. The pitch was that the spaces helped foster connection and collaboration, but it also meant that companies needed less space per employee and could save some money on rent. But Covid is prompting changes in offices.

“We’re certainly hearing that ‘These departments can flex in and out,’ so they’ll need less space, but those spaces will need to be spread out. Everything was going exclusively open-concept,” Barranco says. Now, he adds, many companies are looking at “having some privacy nodes just to pay attention to health and safety.”

Barranco explains that 10 West End is heavy on amenities, including a rooftop deck. That’s drawing strong interest from some tenants who are currently in downtown Minneapolis. Barranco says that the building’s early tenants, CarVal Investors and HDR, are creating spaces that will help draw people back to the office.

Maximizing the Work-Life Sway for Women
Verified: Make It Work
The Problem with Prophets
Is Shrimp Delayed, Shrimp Denied?

“There are those that have been back, and they’ve been back for months. Those are generally the smaller, locally run companies—single-office type users,” Gelfman says. “The large, national companies are taking a much more cautious, wait-and-see approach, whether they’re downtown in the CBD [central business district] or out in the ‘burbs. They’re the ones that are really waiting for widespread vaccinations … before returning to the office,” for liability reasons.

Gelfman says that big companies are gauging the outlook “a quarter at a time,” tracking government and health care data and trends. Gelfman focuses on suburban office leasing; most of the properties he works on are in the western suburbs. Since the first of the year, he says, another definite trend has emerged.

“Three-quarters of the prospects that we’re seeing in the market right now are groups that are downtown tenants that are looking out to the ‘burbs,” Gelfman says, noting that public safety concerns are a bigger factor than Covid fears.  “They’re more reluctant to return to the office because of what’s going on downtown right now.”

The high cost of parking in downtown Minneapolis is another factor, Gelfman says. Suburban offices have free parking. He says that many companies whose leases expired in 2020 signed short-term renewals to buy a little more time before making big decisions about the future.

“A lot of landlords have spent time over this winter updating their building infrastructure to accommodate these Covid concerns,” Gelfman says. That meant adding touchless door entries and high-filtration HVAC systems.

But there is no single solution that will work for every company. Jim Damiani, executive managing director of the Minneapolis office of New York-based Newmark, says that space decisions are being handled on a case-by-case basis. “Everybody’s trying to figure it out,” Damiani says.

But Damiani has a message for all tenants: Build flexibility into plans for your office space.

Damiani, who represents tenants, is telling them, “ ‘Be flexible with the design of your space, the furnishings in your space, and your lease.’ If 20 percent of the people are at home, maybe you take 10 percent less office space.”

“I think the big thing that everybody is really trying to figure out is what does the new workweek look like?” says Roslyn zumBrunnen, director of interiors for Wayzata-based design firm Mohagen Hansen. Her firm, with about 50 employees, saw only about 25 percent were in the office on any given day by late February.

One challenge for companies is finding ways to make time in the office more “meaningful” for employees, zumBrunnen says. “I think the other thing we’re trying to balance for people is, do you give everybody a work station when they might potentially be there two partial days of the week?”

Her firm has one client that is allocating 15 dedicated work stations for employees who will be in the office every day and will offer another 45 spaces for “hoteling,” a system in which staffers don’t have assigned seats.

Historically, companies may have dictated that employees from key departments had to be in the office, parked at their desks all day. But working from home under the pandemic has changed that belief.

“The other thing we’re going to probably be seeing a little bit more is more space designed around personalities versus job descriptions,” zumBrunnen says. “You’re going to have to offer remote work to be competitive with talent.”

Jim Vos, principal with the Minneapolis office of Washington, D.C.-based Cresa, says it will be key to reconcile the needs of both employees and their employers.

“There are two different conversations going on. One is all the employees kind of like working from home, but there’s a sense that the pendulum is swinging back. They’re finding that they miss their co-workers,” Vos says. After people are vaccinated, Vos predicts many employees will want to return to offices.

“The second conversation is what leadership is saying. They miss their teams too. To grow or innovate or collaborate and do the things that made them a good company before, those things are way harder to do when people aren’t together,” Vos says. “I think leaders want to see their teams reconnect. I am hearing client leaders really push to get people back.”

It’s clear that many companies are likely to operate with a hybrid model, where workers divide their work time between home and office. But what will be the ideal mix?

“We’ve had a couple of clients say, ‘I want everybody in the office the same day.’ Maybe it’s Tuesday, Wednesday, Thursday we have super-high participation, and Monday and Friday it’s discretionary,” Vos says. “But if that’s the case, you need most of your space.”

Some are saying that the office will be where they meet and home is where they’ll work.

He notes that human resources directors for many downtown companies are regularly meeting with the Minneapolis Downtown Council, which gives everyone a sense of what others are thinking. Vos says, “The unwritten rule right now is the race to be last in terms of inviting people back: ‘We want everybody else to show us how it’s done, have their employees make mistakes or get comfortable. We want to show up at the party fashionably late.’ ”

Despite fears about the future of downtown Minneapolis, Vos says it will remain the easiest place in the metro to get to by public transit.

Says Vos, “Once we get some momentum back downtown, I think it will accelerate.”

Survey Says: People Will Return to the Office in Varying Degrees

The pandemic has created a new industry of conducting studies about what the world will look like after the pandemic. Michigan-based Steelcase has studied the issue in depth. Why do they care? Steelcase is the world’s largest office furniture manufacturer.

The company’s “Global Report: Changing Expectations and the Future of Work” offers this overview of what happens next:

“While some headlines suggest the office will go away as people embrace working from home almost exclusively, the research identifies a more nuanced, hybrid future. Most people expect to work in the office most of the time, but they also expect greater flexibility from their organizations going forward.”

Steelcase surveyed employees about how often they are expecting to work from home in the future. Only a small percentage want to avoid the office altogether. 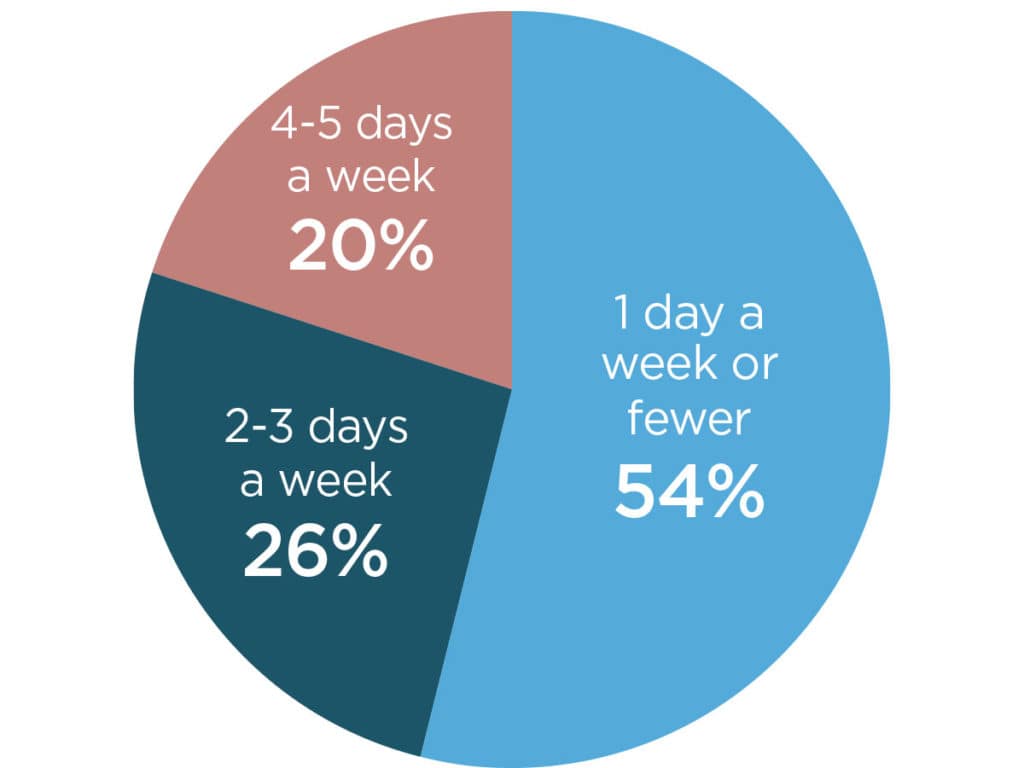 What Happens to Co-Working?

Like most other corners of the office market during the pandemic, it’s been a bumpy ride for operators of some co-working spaces. Co-working companies typically signed standard leases with building landlords and then sold memberships to people looking for flexible workspace.

But those members don’t usually have long-term commitments to co-working companies. Flexibility is a big selling point. That meant that they could drop out with little notice, while co-working operators still had rent to pay on leases.

However, some are still bullish. Chanhassen-based Life Time is pressing ahead with plans to open its third local Life Time Work co-working space in downtown Minneapolis in early summer. The 53,000-square-foot space will be its largest co-working space yet.

“A lot of people who are at the end of their leases are not going to renew a traditional lease,” James O’Reilly, president of Life Time Work, tells Twin Cities Business. “We actually think there’s going to be a lot of demand.”

A fourth quarter 2020 report from Delaware-based CoworkIntel surveyed the current state of the co-working market. According to CoworkIntel, the occupancy of co-working space plummeted from 77 percent in February 2020 to just 51 percent in June 2020. The study identified hopes of a rebound in 2021. The survey also found that 57.3 percent of co-working operators say that they had renegotiated lease deals with landlords.

This story appeared in the April/May 2021 issue with the headline “Home Sweet Office?”