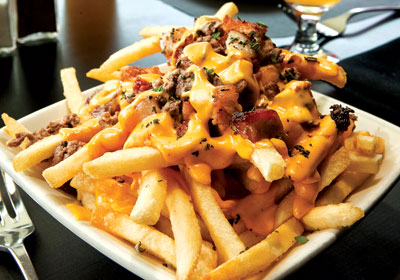 Cheese grabs the limelight at the Strip Club in St. Paul.
November 01, 2011

Chef J. D. Fratzke of the Strip Club Meat and Fish restaurant on St. Paul’s East Side calls his creation “hot mozza.” They’re savory balls of cheese rolled in a little flour and crushed almonds, with a hit of chili pepper inside. They’re deep fried to make them crunchy and melty, and served on a skewer with a thin-asair slice of cured meat and a basil leaf.

It’s a great example of what cheese can do, beyond sitting on a cheese plate or holding together macaroni. “I really like using cheeses as finishers and in ways people might not have thought about,” Fratzke says. “But cheese can make a dish kind of heavy. You have to pick the time of year and pick your application.”

Fall is a great time of year for showcasing great cheeses. Fratzke is also stirring some Little Boy Blue cheese into polenta and serving it alongside braised meats. Parmesan is traditional in polenta, but Little Boy Blue, an awardwinning Roquefort-style sheep’s milk cheese from Hook’s Cheese Company in Wisconsin, adds pungency.

Another treat that Fratzke has introduced is Farmer Bob and Fries. (Farmer Bob grows the tomatoes in the dish.) It’s the perfect mix of sweet, sour, salty, and creamy.

He has been thinking a lot about Star Thrower’s Icelandic skyr and admiring what Minneapolis’s CafÃ© 128 is doing with it. Fratzke also has playing around with Les FrÃ¨res, an earthy semi-hard cheese from Crave Brothers in Wisconsin.

“Cheesemongers from all over Minnesota are bringing things I’ve never tried before,” he adds. “That’s what inspires me to unplug from the rest of the world and dream of new dishes.”