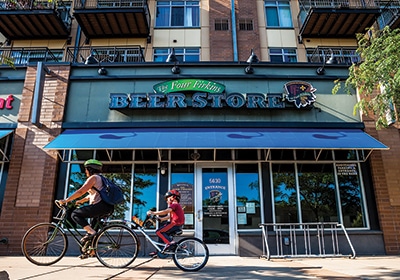 Have We Reached Peak Craft Brew?

The closure of Four Firkins this summer had some wondering if the market had reached a saturation point.
September 05, 2015

As the craft brew market is flooded with new local entrants, market oversaturation is in the back of everyone’s minds. In that light, this summer’s closure of trailblazing craft beer retailer the Four Firkins, with locations in St. Louis Park (since 2008) and Oakdale (since September 2014) looked ominous. Neither the store’s former management nor its ownership would discuss the closure with the press, adding further fuel to the mystery.

Though concerns about the state of the market exist, Daniel Mays, co-owner of Stinson Wine, Beer, and Spirits in Minneapolis, notes that “craft brewing is only 15 percent of the market right now, so there’s still a lot of the [retail] market for us to get into. People use the example of Portland all the time because they have about 50 percent of the market share there.”

North Loop Wine and Spirits’ owner Lisa Impagliazzo points to that disparity and suggests Four Firkins may have doomed itself by focusing on such a small market segment when most liquor retailers sell beer of all types, plus wine, and spirits. “They could have been the best beer store in the cities,” she notes, “but they refused to sell things like Coors Light.”

Impagliazzo theorizes that while Four Firkins were “probably the best beer guys in the business,” Minnesotans just were not willing to make one stop for Budweiser and another for Steel Toe.

The closure also doesn’t appear to be related to any license violations. St. Louis Park spokesperson Jacqueline Larson says the retailer’s licensure was in good standing at the time it closed.

Though the shakeout in craft brewing still seems more likely to happen among brewers rather than retailers, it appears that the craft scene in the Twin Cities is not yet dominant enough to keep a retailer alive all by itself.