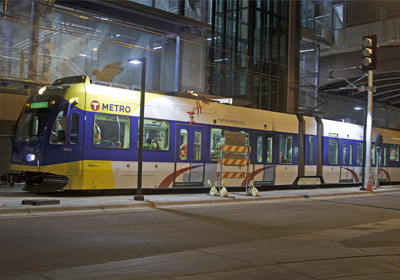 Has The Green Line Fueled $2.5B In Developments?

A new Met Council report tallies $2.5 billion in investments near the light-rail line, but the number is far from an exact science.
May 25, 2014

As the opening of light-rail service connecting the downtowns of St. Paul and Minneapolis nears, the Metropolitan Council announced that the Green Line project has already drawn more than $2.5 billion in development projects.

The Met Council added up 121 projects within a half-mile of the Central Corridor line, tracking new construction, redevelopment, and renovation projects that have been completed or announced since engineering work for the project began more than five years ago.

But what does that tally include? The count is not an exact science. For starters, the Met Council said that budget figures have not been made public for 43 of the listed projects.

“It’s a conservative number, considering what’s still out there,” said John Welbes, a spokesman for the Met Council.

The $2.5 billion tally counts 78 projects. Listed projects run the gamut from $400 million down to $155,000. Most of the budget figures were culled from various media reports. But it’s not clear from the findings how many projects are a direct result of the new LRT line.

The largest project on the list, the $400 million Downtown East development in Minneapolis, is actually west of the Green Line connection to the existing Hiawatha light rail line, now referred to as the Blue Line. The count also includes a $101 million hotel/apartment project atop a parking ramp that will also be developed by Minneapolis-based Ryan Companies US, Inc., the Downtown East developer. Combined, those Ryan projects alone equal about 20 percent of the investment total.

The Downtown East project will be anchored by two new office towers to be owned and occupied by San Francisco-based Wells Fargo & Co. David Kvamme, CEO of Wells Fargo Minnesota, recently told Twin Cities Business, however, that the transit connections at the site were indeed a key reason why the financial giant picked the site over suburban options.

The overall Met Council list includes 53 projects in St. Paul and 68 projects in Minneapolis, counting projects near the new line by the University of Minnesota and numerous projects close to the existing line in downtown Minneapolis.

The second-largest project is the $243 million overhaul of Union Depot in downtown St. Paul.

Amid the continuing boom of construction for new multifamily rental projects, many of the largest projects on the Met Council's list are apartment buildings. The list includes the Penfield ($62 million) and Pioneer Endicott ($46.7 million) in downtown St. Paul, C&E Lofts in St. Paul ($16 million), and WaHu ($83 million), a student housing project now under construction in Minneapolis. St. Paul-based Episcopal Homes is building a $45 million senior housing project, expanding its presence near Fairview and University avenues in St. Paul.

The smallest project on the list? New microbrewery Urban Growler Brewing Company’s $155,000 renovation of space at 2325 Endicott Street in St. Paul. No budget is listed for a Culver’s restaurant location that opened at 1491 University Avenue West in 2012.

Some of the listed projects are simply renovations of existing properties, such as the $40 million update of the Ordway Center in downtown St. Paul. The list also includes $4 million in updates to the Fifth Street Towers in downtown Minneapolis, a pair of towers built during the 1980s that’s under new ownership.

The tally did not include Target Field, TCF Bank Stadium, or the future stadium for the Minnesota Vikings, a $975 million project that’s now under construction. Combined, the three stadiums would have added approximately $1.7 billion to the total.