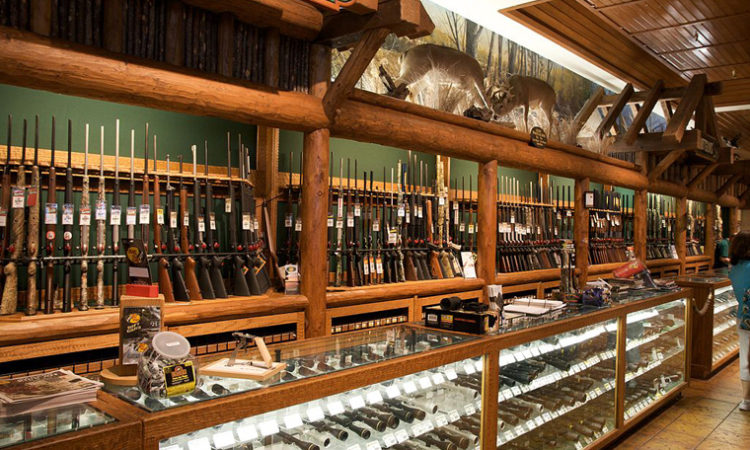 That breaks with a decades-long trend that saw gun purchases increase after mass shootings.
By Greta Kaul
March 08, 2018

In recent years, a trend has emerged when it comes to gun purchases, both nationally and in Minnesota.

Almost without fail, in the wake of a mass shooting the number of guns purchased spikes as people amass more weapons. It happened after the shooting in the movie theater in Aurora, Colorado; it happened after 20 children and six adults were shot and killed in Newtown, Connecticut, it happened after two shooters killed 14 at a social services center in San Bernardino, California.

Given that reliable pattern, you might have expected a repeat jump in gun sales after the mass shooting in Parkland, Florida, on Feb. 14. But that doesn’t appear to be the case — at least not yet — according to FBI data on firearm background checks. In fact, in Minnesota there were actually fewer background checks this February than in February of 2017. That connects with another trend that’s emerged since President Donald Trump’s inauguration: Firearms purchases are declining.

Some call this dip in background checks and gun sales, which started in mid-2017, “the Trump slump.”

Background checks were up slightly at the national level — by 4 percent — this February, with 2.33 million over last, when there were 2.23 million, the data show.

Spikes in background checks (compared to the same month the year prior) appear to trail shootings in Newtown, Connecticut (Dec. 14, 2012), San Bernardino (Dec. 2, 2015) and the nightclub shooting in Orlando (June 12, 2016). Background checks did not increase in the months following the shooting in Las Vegas (Oct. 1, 2017) and Sutherland Springs, Texas (Nov. 5, 2017), and so far, they have not increased in the wake of the shooting in Parkland, Florida, on Feb. 14. 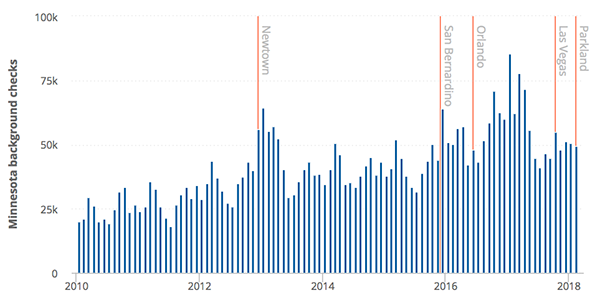 In Minnesota, a person who wants to buy a handgun, semiautomatic military-style assault weapon or some long guns through a federally-licensed dealer is required to get a permit, which includes a background check. They fill out an application with their local police department. Some crimes, including felonies, orders of protection, domestic assault and violent crimes, plus orders of protection against the would-be buyer, disqualify a person from being cleared to buy a gun.

That background check allows a Minnesotan to purchase guns for one year, said William Hutton, the former Washington County sheriff who is now the executive director of the Minnesota Sheriffs' Association. In some cases, one-time buyers can undergo the background check at the gun shop.

Gun buyers who purchase their firearms from private sellers are not required to undergo background checks.

The permit to purchase is separate from a permit to carry, which in addition to requiring background checks, has training requirements. The number of permits to carry issued is also down: after jumping from 44,696 in 2015 to 71,156 in 2016, they dropped to 55,069 in 2017, according to the Minnesota Bureau of Criminal Apprehension.

In Minnesota, background checks have been down the last nine months compared to the same months the year prior, even following shootings in Sutherland Springs, Texas, and Las Vegas at the end of last year.

Gun sales are down, too, said John Monson, the owner of Bill’s Gun Shop and Range, which has several locations in Minnesota, North Dakota and Wisconsin.

“2017 was real slow. When all the political hype goes away, the business slows down,” he said.

“When Obama went out, and Clinton didn’t go in,” he said, having Trump in the White House and a Republican Congress, “took that fear away of any laws changing, and that put the brakes on (buying).”

That wasn’t exactly a surprise, as elections tend to set off cycles of gun-buying.

“I’ve been the owner of Bill’s for 15 years, and we’re on a two- to four-year rollercoaster,” caused by elections, Monson said. “It’s a horrible way to run a business. There’s not a lot of planning I can do, except I know the fall of 2018 is going to be busy and then it’ll probably be slow again until summer 2020.”

In his stores, Monson says he’s seen a small bump in sales since the Parkland shooting — and a lot of discussion on the gun debate. He wouldn’t be surprised to see increased sales continue into March, as the conversation surrounding guns continues to simmer.