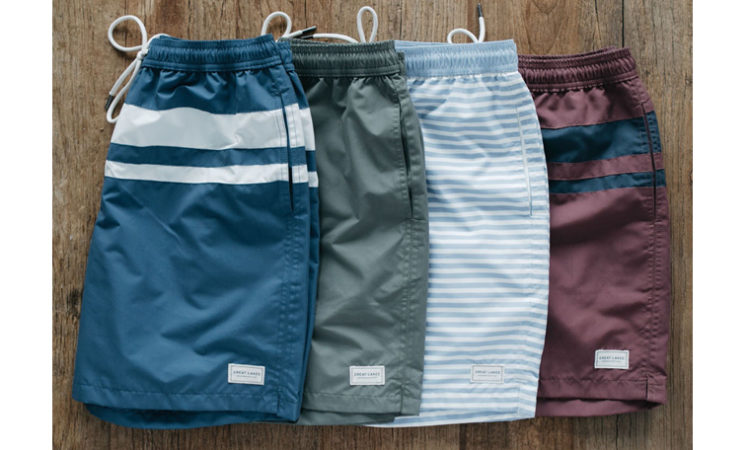 The Minneapolis-based apparel company has launched a new line of swimsuits made 100 percent from post-consumer recycled water bottles.
By Amanda Ostuni
March 29, 2019

Apparel company Great Lakes Northern Outfitters is diving into a new kind of conservation effort. The Minneapolis-based business this week launched a new line of men’s swim trunks that are made entirely out of post-consumer recycled water bottles.

Spencer Barrett, who co-founded Great Lakes Northern Outfitters with David Burke, says the idea behind the line is to take plastics that would normally end up in landfills—and likely waterways from there—and instead repurpose them into clothing to better protect the environment.

“We basically grew up going to the cabin,” says Barrett of him and Burke. “I would go to Hayward, Wisconsin, and David would go up north to Brainard, and we spent a lot of time on Superior, as well, so it was always something we wanted to help protect.”

Barrett says they were formally inspired in part by learning that more than 22 million pounds of plastic ends up in the Great Lakes every year, according to Chicago-based nonprofit Alliance for the Great Lakes. When they came across a manufacturer that was capable of turning recycled water bottles into fabric, they saw their chance to try to put a dent in that number.

“This by no means is going to solve our plastic pollution issue, but it’s the first step in creating awareness,” says Barrett. “This is something that’s near and dear to us.”

To create the swimsuits, recycled bottles are broken down into tiny flakes, melted, and extruded into yarn. Eight water bottles are used for every swimsuit made.

Barrett says they feel like normal swim trunks—just as soft and “not at all plasticky”—and are stronger and more durable than standard polyester-based swimsuits given plastic is designed to degrade very slowly.

The manufacturing process is a little more costly, so Great Lakes Northern had to raise the price of the swim trunks by $6 to $64 total. Barrett says the conservation element is something customers are willing to pay extra for.

“The response has been overwhelmingly positive,” says Barrett. “People have reached out saying how much they appreciate what we’re doing.”

The company has been developing the recycled water bottle swim trunks for a little over a year, and they officially launched on Great Lakes Northern shelves on Tuesday.

Barrett says it’s rare to find smaller companies utilizing the plastic-to-fabric process, but use is growing, especially with bigger companies like Patagonia and H&M starting to incorporate it into their production.

Yet, the swim trunks redesign isn’t the only effort they’re making to improve environmental conditions.

They also recently launched the “Freshwater Initiative,” a campaign in which they partner with environmental organizations for protection endeavors. So far under the initiative Great Lakes Northern has raised over $5,000 for Save the Boundary Waters, a nonprofit focused on saving the Boundary Waters from copper mining.

Looking ahead, Barrett says they want to partner with Alliance for the Great Lakes this year, and they are currently in talks to team up with Granite Gear, an outdoor gear retailer that organizes lake cleanups.

Additionally, he says they are debuting a reusable water bottle line, and plan to apply the same process used to make the new swimsuits to other products. Barrett says changing the manufacturing process for their staple items, like shirts, hats and sweatshirts, is a larger undertaking, given how much more established and extensive that part of their business is. Nevertheless, Barrett and Burke hope it can happen within the next year.

Barrett adds that it’s fitting they started with swim trunks.

“It ties really well into the lakes, [the swim trunks] being a product that you wear while really enjoying the lakes,” says Barrett. “This is just an initial step… it’s something that is really important to us and now that we have the capability to do it, we’re really excited about it.”