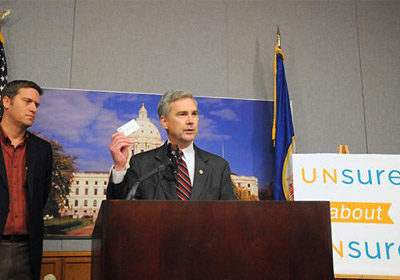 Republican leaders leveled another round of criticisms at Minnesota’s embattled health insurance exchange on Monday as the deadline for consumers to select coverage looms next week.

GOP legislative leaders said Governor Mark Dayton, who in part led the effort to bring a state-based exchange to Minnesota, needs to take ownership of MNsure’s failings. They said the governor must address the uncertainty around whether consumers will have health insurance on January 1, when the federal health reform law takes full effect.

The Dayton administration responded with a heavy criticism of the Republican leaders in a release: “The minority leaders are fully aware that that under Minnesota law, MNsure is governed by an independent board. They are also aware that MNsure and other state agencies have been engaged in an around-the-clock effort to ensure that those who need coverage have it on Jan. 1.”

State and MNsure officials—as well as the insurance carriers—have said that Minnesotans who select plans and pay for them by December 23 will have coverage beginning on January 1. They’ve also guaranteed that those enrolling in public health programs who complete the necessary steps will be covered.

But Republican leaders have said there’s uncertainty over whether consumers will have coverage and that no insurance cards have been issued yet. They blasted Dayton for distancing himself from policy failures—the governor was critical of MNsure’s operations last week—and said the governor needs to ensure that the exchange’s basic functions are working.

“We think that Governor Dayton needs to take leadership on this issue,” Senate Minority Leader David Hann said Monday afternoon at a Capitol press conference. “The bottom line is people need to be insured.”

Eileen Smith, spokeswoman for the Minnesota Council of Health Plans, which represents Minnesota insurance companies, said on Monday the plans are working with MNsure to process enrollment information manually.

“Plans are working with MNsure every day on manually getting enrollment information from MNsure to the health plans,” Smith said in an email.

“One of the changes to keep the process moving is that MNsure is sending invoices to everyone who asked to be invoiced, even if they asked for the health plan to invoice them,” Smith added. “That way people don’t have to wait for the plans to have the information in order to receive an invoice. So when people receive an invoice, they need to pay it immediately.”

Smith said in an interview that staff from both the public and the private side have been working “around the clock” to sort issues out. She said she’s gotten emails from tech staff in the middle of the night. But, she warned, there will still likely be issues come January 1, although consumers will have coverage.

“What I’ve been told by some of our tech people is that there will be problems, interruptions—there’ll be problems on Jan. 1,” Smith said. “Our goal right now is to minimize them.”

As an example, consumers who go to a pharmacy on Jan. 2 to pick up medication might not be in their insurer’s electronic system, she said. Pharmacists would then have to get in touch with the plans to verify the consumer had insurance, which is an issue that has come up before MNsure.

“Their goal is to not have it happen at all, but they just can’t promise anything at this time,” Smith said.

Republicans at the Capitol on Monday didn’t have concrete solutions to the problems they raised, and instead called on Dayton to end the “uncertainty” that they said consumers are feeling in the final days before health coverage is supposed to take effect.

They positioned themselves as practical critics of a program that should be working for consumers and isn’t—though it’s one they’ve never supported.

When reporters pushed the Republicans on their role in the exchange’s missteps, they demurred. The GOP blocked or ignored exchange legislation during their time in the majority, when Dayton pushed ahead on his own.

“Would I love to repeal this? In a heartbeat,” House Minority Leader Kurt Daudt said, noting that the federal regulatory atmosphere made such a move unlikely.

Dayton called the exchange’s performance “unacceptable” last week. On Monday, his administration was critical of the new GOP attacks.

“No one has ever gotten health care via press conference, so it is unsurprising that today’s round of GOP rhetoric was so unproductive,” Dayton administration Spokesman Matt Swenson said in a press release.

But Swenson also revisited the governor’s criticisms of the exchange, which has faced a bumpy ride since it opened on Oct. 1. Although initial problems plagued the exchange’s launch, it was performing better than the federal exchanges in the ensuing weeks.

But it’s had a series of recent glitches, including the need to review about 30,000 applicants for correct information and difficulties sending enrollment information to the insurance carriers.

“There is understandable frustration with the process thus far—Governor Dayton has been very clear that the current state of the exchange is unacceptable, which is something he has expressed clearly to the board and to the public,” Swenson said in the statement. “The governor has said, and still believes, that we are in a critical time for the exchange—if changes are needed, they must be made immediately.”

Others have also latched onto an event surrounding MNsure Executive Director April Todd-Malmlov and the Human Services official who oversees the exchange there. KSTP reported on Sunday that Todd-Malmlov and Jim Golden, the state Medicaid director, were vacationing together in Costa Rica around Thanksgiving.

Scott Honour, a Republican running for governor against Dayton in 2014, released a statement on Monday bashing the exchange’s performance. He called for Todd-Malmlov to step down.

“I can’t imagine the head of a company being on vacation during a major product rollout,” Honour said in the statement. “So for the head of MNSure to be on vacation in Costa Rica during the troubled rollout of a government program that affects the lives of almost every Minnesotan is beyond belief.”

Republican leaders declined to directly address the issue at the Monday press conference. Asked afterward, Hann shifted focus back onto the performance issues plaguing the exchange and said he wasn’t familiar with many details of the controversy.

But the GOP leaders did criticize DFL lawmakers for not convening a legislative oversight committee meeting to discuss MNsure’s problems. The committee hasn’t met since September, and its next meeting is in mid-January.

“This oversight committee should be discussing this process,” Hann said.

Representative Joe Atkins, the architect of the exchange in the House and a co-chair of the committee, said he’s not sure what lawmakers could have done to stop the problems that have arisen.

He said Jan. 9, when the next meeting is scheduled, was the first time lawmakers’ schedules aligned to make a gathering feasible. He added: “I don’t know that we necessarily would have been able to prevent the issues.”

Atkins and Senator Tony Lourey, who carried the exchange legislation in the Senate, are meeting with MNsure Tuesday. Atkins said he’s been in contact with the exchange a few times a week.

The Democrat from Inver Grove Heights said that he and other lawmakers have shared their concerns with MNsure. But that hasn’t stopped him from worrying about the exchange, though he's glad it's based in Minnesota and not in Washington.

“I feel like a nervous parent who’s given the car keys to their teenage driver,” Atkins said about MNsure. “You turn over the car keys and watch them drive down the road and say a few prayers.”

Atkins said he would be willing to look at Todd-Malmlov and Golden’s vacation if someone could show the move was a conflict or seriously affected their work.

“If they’re not doing their jobs, it does [concern me],” Atkins said. “If she’s still working … I just don’t know enough about it.”

“I guess someone would need to identify where the conflict in that is,” he added, saying that he hoped all state agencies, not just MNsure and DHS, work well together.

“Whether they needed to do it in Costa Rica, I don’t know,” he said.

DHS and MNsure put out a joint statement dismissing the issue on Friday. “There is no conflict of interest,” the release says. “There is no reporting relationship between them. Mr. Golden is a DHS employee. Ms. Todd-Malmlov works for MNsure.”

Still, there are plenty of problems to occupy exchange staff in the weeks before Jan. 1.

In a message to insurance brokers on Monday morning, the exchange outlined its fixes to issues relating tax credit calculations for consumers. It also reminded brokers of the tight deadlines customers face and stressed that the exchange can’t accept paper applications.

“We are currently experiencing problems with plan enrollment for January 1, 2014 coverage and are working to resolve this issue,” the message said. “Please check the website for updates. We apologize for any inconvenience this causes you.”