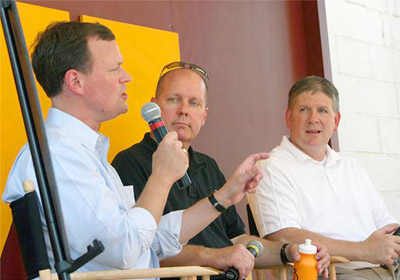 Aside from campaign volunteers, fewer than a dozen people showed up to listen to the candidates on a steamy Sunday afternoon.
September 06, 2013

Governor Mark Dayton should be prepared for a bill to repeal the new warehousing tax during the upcoming special legislative session.

Zellers, Hennepin County Commissioner Jeff Johnson and state Senator Dave Thompson, three of the five candidates who appeared at the University of Minnesota event, all said they intend to tackle Dayton on his business record.

“This governor demonstrates his lack of understanding of how business works,” Thompson replied to a question from Larry Jacobs, U of M political science professor who moderated the event.

“Governor Dayton’s job strategy is singular,” said Johnson. “It provides subsidies to businesses to try to lure them here…. but we have created such an uninviting environment for people to start or expand a business here, that’s all he’s got left.”

Only three of the announced GOP candidates for governor made it to the stage on Dan Patch Avenue. Scott Honour declined, citing a scheduling conflict. The newest candidate, Hibbing schoolteacher Rob Farnsworth, listened but did not speak. He said he didn’t register for the event in time to participate.

Neither Honour nor Farnsworth missed much of an opportunity to persuade voters. It appeared that aside from campaign volunteers, fewer than a dozen people showed up to listen to the candidates on a steamy Sunday afternoon.

“Sounds political to me,” remarked one flushed fairgoer who walked on by.

But the candidates soldiered on, agreeing that the state’s health-care exchange should be dismantled—while acknowledging the unlikelihood of that—and pushing aside the issues of abortion and gay marriage as not relevant to their campaigns.

In responses to the questions of whether factions within the Republican Party led to losses in 2012 and the value of the party endorsement, all three concluded it was time for the GOP to try to achieve a bigger political tent.

“I think the key to us winning an election is that we don’t spend too much time talking to ourselves. And that’s what the endorsement process, unfortunately, engenders,” said Johnson who, like Thompson, said he will abide by the endorsement and not challenge the winner in a primary.

Zellers and the primary

Zellers explained why he intends to seek the endorsement, but will go on to a primary if necessary. “One of it is a function of whether the party has the resources to help us out. It’s no great secret that we are substantially and woefully in debt,” he said. “I actually don’t know if we will have an endorsement.”

Johnson added: “There are still moderate Republicans out there.We need them to win elections.”