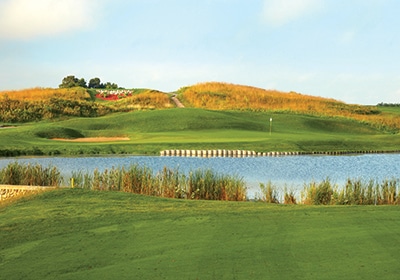 The golf course has long been a great place to entertain a client, build a relationship, reward an employee or even cut a deal.

The golf industry has changed over the past two decades, however, with the numbers of golfers declining and course closings on the rise. Yet the game itself remains constant, and business people continue to find that a day on one of Minnesota’s golf courses is better than any day in the office.

“It’s a great way to build relationships with your clients,” says John Steveken, president of MBA Software in Minneapolis. “I don’t know of any other environment where your customer is going to be comfortable hanging out for six hours with a sales guy.”

Patrick Hunt, president of Hunt Adkins advertising agency in Minneapolis, agrees. A member of Hazeltine National Golf Club, Hunt regularly entertains clients on the golf course. He says the practice may not be as prevalent as it was before a change in tax laws in the 1990s that lowered the deductibility of golf club memberships, but he gets out often with clients or prospective clients. He maintains it’s a great way to do business.

“If you are entertaining a client at a sporting event and sitting in a row with other people, it is difficult to watch a basketball game or football game and really talk about anything else,” he says. “But on the golf course, walking down the fairways, you’ve got a lot of downtime in between shots. And part of it is getting to know someone outside of the pure business conversation.”

In addition to tax law changes, golf’s popularity has sagged. In the 1990s, the emergence of Tiger Woods helped fuel a golf boom, and courses popped up all over the country. But the boom busted over the past 15 years, as golfers have left the game because it’s too hard, too expensive or too time-consuming.

Locally, the numbers aren’t any better. There were 515 courses in the state in 2013; the Minnesota Golf Association reports no new courses opened, while three shut down.

Steveken says that the advent of communication technology has prompted some of his clients to stay in the office and review his software remotely. But he still prefers the face-to-face interaction on the links.

“Anytime we can get out of the office and out on the golf course, that’s great,” Steveken says. “My goal is to make sure the client is having fun and make sure they’re a decision-maker. Afterwards we’re talking about business over dinner. It sounds old-fashioned, but I really think that’s the key.”

Tim Smith, financial director for Anytime Fitness in Hastings, says the course is a great place to get the creative juices flowing with his lending partners. He takes 30 to 40 business rounds of golf each year.

“We do quite a bit of brainstorming on new ideas and different programs we can put together,” he says. “We’ve come up with some of our best stuff out there.”

Despite the downturn in local course openings, Minnesota has plenty of great courses to choose from for a client outing, a resort-course weekend up north or a round at a historic venue.

If the intention is to capture the client’s undivided attention, a weekend at one of Minnesota’s great northern resorts can do the trick. Smith says it’s a great way to solidify relationships—and even make golfers out of some of his lenders.

“Every year we go up there,” he says. “We swing into the Quarry at Giants Ridge, play the Legend and then go to the Wilderness as kind of a three-day excursion. It’s great. One of my main lending partners didn’t used to be much of a golfer; now he can’t get enough of it.”

Here are five up-north golf resorts that shouldn’t be missed.

Giants Ridge
Since 1998, golfers have traveled to Giants Ridge in Biwabik to take a break from the bustling Twin Cities. With two award-winning courses, the Legend and the Quarry, Giants Ridge is a true golf destination among the hills, lakes and woods of the Iron Range. The Legend, named Minnesota’s fourth-best public course by Golf Digest, features the iconic 17th hole, which requires a shot over a bay on beautiful Sabin Lake. The Quarry was carved out of reclaimed mining land in 2003 and features elevated tees and dramatic vistas of the rugged countryside. It is ranked the No. 1 public course in the state by Golf Digest, Golfweek and Golf magazine.

The Wilderness at Fortune Bay
Just down the road from Biwabik in Tower, Minn., the Wilderness at Fortune Bay makes a golf trip up north complete. The third northern Minnesota course by architect Jeffrey Brauer (the Legend and Quarry at Giants Ridge are his others), the Wilderness is a feast for the eyes as it winds through granite outcroppings, majestic white and red pines, and along shimmering Lake Vermillion. The challenge is substantial on the 7,207-yard course, but a chance for redemption remains at the gaming tables of the Fortune Bay casino.

Madden’s Resort on Gull Lake
Madden’s features everything a golf business traveler could want, from meeting and banquet spaces to nearby woods and water to get away from it all. The resort includes 63 holes of golf, with the Classic the crown jewel. As Minnesota’s only five-star top 100 golf course, the Classic offers a tranquil stroll through towering oaks and brilliant red maples. With elevation changes upward of 60 feet, the views of this northern beauty make it a perfect fall destination for business and pleasure.

Grand View Lodge
For years, Grand View Lodge has been piling up the “best of” awards in Golf Digest, Golfweek and Golf magazine thanks to its top-notch accommodations and its 54 holes of challenging golf. The Pines features three unique nines (Woods, Lakes and Marsh), while the Preserve is a championship track of rolling and tumbling fairways that you won’t soon forget. With a wide variety of lodging on Gull Lake in Nisswa, Grand View is in the middle of central Minnesota lake country and has been named Best Golf Venue by Minnesota Meetings and Events magazine.

Breezy Point Resort
With the 2012 acquisition of Deacon’s Lodge, Breezy Point now boasts 54 holes of great golf. Along with the Traditional and Whitebirch courses, the resort now has its premier track, Deacon’s Lodge, an Arnold Palmer design that was named after his father. Deacon’s rolls through the surrounding lakes, woods and wetlands and was named one of America’s Top 100 Courses by Golf Digest and Golf magazine. The resort’s lodges can sleep 12, and each has a pool table, card table and grilling area—great for client entertaining on a grand scale.

The slump in the golf economy has made it easier for golfers to join some private clubs, thanks to reduced initiation fees or dues. Country clubs are a great venue for client entertaining because of greater availability of tee times than at public courses. But in Minnesota, one of the biggest attractions for out-of-state clients is to play at local courses—public or private—where national events have taken place. The Twin Cities is home to five historic courses.

Hazeltine National Golf Club, Chaska
Hazeltine National has a history as a host of major events: 1970 and 1992 U.S. Opens and 2002 and 2009 PGA Championships. Minnesota was the first state to hold all 13 USGA championships, and Hazeltine has hosted eight of them. It continues to make history, as it will be home to the 2016 Ryder Cup, golf’s biggest event, and the course and clubhouse have undergone complete renovations in preparation. Hazeltine’s history is unmatched in the state, and it is atop any golf-lover’s must-play list when coming to town.

Interlachen Country Club, Edina
The figures in Interlachen’s storied history include the game’s greatest amateur, Bobby Jones, who won the 1930 U.S. Open at the Edina course—the third leg of his historic Grand Slam. In 2002, the course hosted the Solheim Cup, and in 2008 the U.S. Women’s Open, where the legendary Annika Sorenstam eagled on her final hole of major competition and passed the torch to winner Inbee Park, now setting records of her own on the LPGA Tour. Interlachen offers a wonderful walk in the footsteps of the game’s greats.

The Minikahda Club, Minneapolis
The first major held in Minnesota dates back to 1916 at the Minikahda Club, where Charles “Chick” Evans won the U.S. Open. After the win, Evans, an amateur player and former caddie, announced the creation of the Evans Scholars college fund program for caddies with financial need, and a plaque near the first tee at the club honors that moment. The Minikahda Club, which was built in 1898 on a bluff overlooking Lake Calhoun, still provides a great test of golf.

Keller Golf Club, St. Paul
Keller Golf Club, the 1929 municipal course perched above Keller Lake, has arguably the most pro golf history in Minnesota. Keller hosted the 1932 and 1954 PGA Championships, the 1949 Western Open and two former pro tour stops (the St. Paul Open and the Patty Berg Classic). The course reopens in June with a brand-new clubhouse and a completely updated course. The iconic tree in front of the green on the par-3 fourth remains; its place in history was assured when it caused legendary pro Gene Sarazen to take a 10 on the hole and vow never to return.

TPC of the Twin Cities

TPC of the Twin Cities, Blaine
TPC of the Twin Cities has hosted the 3M Championship on the Champions Tour since 2001, and treated the golf-crazed Twin Cities area to some exciting professional golf. Everyone from native son Tom Lehman to renowned players such as champs Hale Irwin and Tom Kite have competed there, and the course’s name and reputation are well known beyond the land of 10,000 water hazards. It’s a tough test, and a great venue for anyone who appreciates the history of the game.

For years, Minnesota has been ranked at or near the top in the number of golfers per capita in the country, as the interest in the sport is always high. The turnout for volunteers and golf fans at major events is typically through the roof. No one knows that better than Patrick Hunt, who is the committee chairman of the 2016 Ryder Cup at Hazeltine, and he says the demand for corporate hospitality space has already outpaced the 2012 Ryder Cup at Medina in Chicago. He has worked on two PGA Championships and, he says, “I’ve never seen anything like it.”

That said, Minnesotans expect plenty when it comes to golf course conditioning, and area superintendents are keen to accommodate. So there are plenty of courses to choose from when you want to reward your high-achieving employee with a nice round of golf. Here are six great courses to consider.

Among the higher-end Twin Cities courses sure to impress in a business-related round, Stoneridge Golf Club in Stillwater, the Wilds Golf Club in Prior Lake and Rush Creek Golf Club in Maple Grove are the cream of the crop. Each commands a substantial fee for their services, but they are worth it, as they offer country club amenities at a public or semi-private facility.

Mid-priced courses that provide an equally tough golf challenge and top-notch conditions are readily found in the Twin Cities. Chaska Town Course sits in the shadow of Hazeltine National but was used for opening round play in the 2006 U.S. Amateur. Prestwick Golf Club in Woodbury is a popular course for client entertaining, with Axel’s Restaurant in the clubhouse. And Brooklyn Park’s Edinburgh USA, site of an LPGA tournament, is a great challenge, with water in play on nine holes.

For more information on members courses of the Minnesota Golf Association, check out mngolf.org for a complete listing.