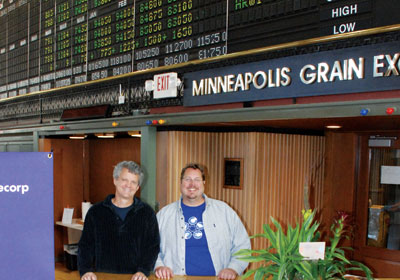 Minneapolis-based software development company Warecorp has been built on a foundation 4,700 miles away—in Minsk, the capital of the former Soviet republic of Belarus. There, 60 employees, working with the 10 in Minnesota, design Web sites and develop software for clients ranging from Fortune 500s to start-ups including Minneapolis “social learning” company Sophia. It’s been a solid business model for seven years: Warecorp projected its 2011 revenue to approach $3 million.

That blend of Minsk and Minnesota has been providing good work, according to clients. Kasey Hatzung, a principal with Minneapolis marketing firm Fusion Hill, has worked with Warecorp on the programming of her own firm’s Web site and also those for clients in health care and financial services. “They’re a great complement to our design expertise,” Hatzung says, whether that means providing “standard Web coding” or more specialized online capabilities. “Warecorp is well suited to ideating and providing customized approaches,” she adds.

But Warecorp sees itself not only as an IT company but also as a social venture. “About 70 to 80 percent of our revenue comes from development projects that have a social angle or direct mission,” says cofounder Chris Dykstra, who is a social activist as well as tech entrepreneur. “We have steadily evolved towards a goal of spending 100 percent of our professional time working on market-based solutions to systemic [social] problems.” As an example, Dykstra cites CharityPanda.com, which Warecorp designed as an easier way for people to host events for charities.

And in the past few years, Warecorp has either launched or purchased companies that reflect its social enterprise ambitions. In 2007, it started Zanby, an online community collaboration platform. Zanby was modeled on Meetup, a digital program that helps communities and political groups organize meetings and forums.

In 2007, Warecorp began its development connection with the Uptake, an organization originally created to post video coverage of the 2008 Republican National Convention shot by private citizens. During that election year, the Uptake covered primaries in 22 states using a blended staff of professional and citizen journalists. Since then, the Uptake has produced more than 3,000 individual political stories on video and Webcast thousands of hours of political events, winning several professional-journalism awards in the process. Like Zanby, the Uptake is now run separately from Warecorp.

Most of the programming for these community-centric sites is performed by Warecorp developers in Belarus. Dykstra first made the Minsk connection while vice president for EPAM Systems, Europe’s largest offshore software developer. During the Soviet era, the Communist government made Minsk the USSR’s engineering center, providing it with the necessary educational infrastructure. Those schools still graduate numerous engineers.

In January 2011, Warecorp acquired Soapblox, a network of state- and location-based blogging communities supported through a common software platform. There are more than 100 Soapblox blogs in the network, generating more than a million unique visits per month, according to Dykstra.

Dykstra believes that Soapblox and the Uptake could be interconnected to provide citizen-journalist news sources for communities and regions across the country.

“We are exploring the intersection of passionate communities of political commentary and research with an aggressive, civic-minded journalism organization that collects and distributes the video record of U.S. political life,” Dykstra says. “I think it might be possible to reconnect the market with the demand for political transparency and trusted data.”