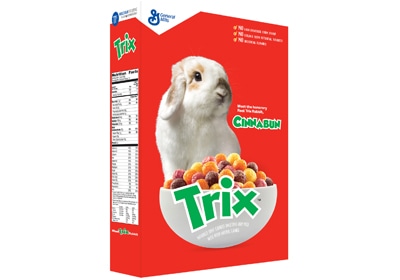 The company hopes to remove artificial flavors and colors from all of its cereals by 2017.
February 08, 2016

General Mills has rebranded its Trix cereal boxes with a real rabbit to promote its push to removal of artificial flavors and colors from its cereals.

A rabbit named Cinnabun was chosen from a pool of more than 7,500 rabbits in General Mill’s “Real Trix Rabbit” competition.

The Golden Valley-based food producer said the release of the limited-run boxes celebrate Trix joining the ranks of 75 percent of General Mills cereals that no longer contain ingredients from artificial sources.

General Mills said the artificial flavors and colors were replaced with ingredients like fruit and vegetable juices and spice extracts such as turmeric and annatto.

The food company hopes to complete this change for all of its cereals by the end of 2017.