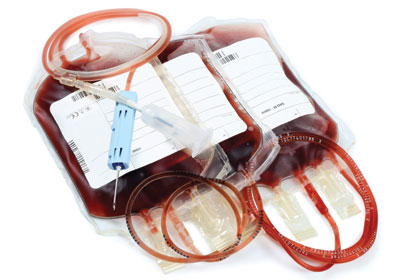 General Blood Aims to Standardize Pricing in the Blood Business

The company also looks to even out distribution.
April 06, 2013

A Minneapolis startup wants to shake up the nation’s blood distribution business.

General Blood, LLC, hopes to serve as a market maker for the nation’s blood system, moving blood from areas with too much to those with too little, and charging standard prices.

The blood business in the United States is worth about $6 billion annually, says David C. Mitchell, General Blood’s co-founder and executive vice president. And it is a business, says Mitchell: “You’re the only one donating anything when you donate blood.”

Thomas Memorial Hospital, a community hospital in South Charleston, West Virginia, uses about 4,000 units of blood a year, says Tom Upton, transfusion services supervisor. He figures the hospital will save $100,000 over two years by switching from the American Red Cross to General Blood.

About 5 percent of hospitals in the United States have their own blood donation centers, Mitchell estimates. The others buy blood from either the Red Cross, which the not-for-profit says accounts for about 40 percent of the market, or from regional and local blood collection centers.

The Red Cross splits its blood services into 36 geographic regions, which recruit donors and provide blood to hospitals in their own areas first, then send any extra to another region with a lower supply.

Regional and local blood centers do business through a hub-and-spoke system. The centers serve their local community first, then ship blood to other members of Blood Centers of America, a for-profit co-op owned by the community blood banks.

Individual Red Cross regions and blood centers follow pricing models dictated by the local market and by individual client relationships, so costs vary. According to Upton, Thomas Memorial paid $50 to $75 more per pint of blood from the Red Cross region headquartered in Johnstown, Pennsylvania, than did a comparable hospital 45 minutes south that bought blood from another Red Cross region.

Even at the going rate, blood might not always be available when hospitals need it. “We might order 20 units of [type] O and get 17,” Upton says. “The Red Cross might have a time when there’s a disaster or donations are down, and then you get 60 to 70 percent of what you ordered.”

After years of researching the industry, Mitchell, 31, and co-founder Ben Bowman, 34, saw a way to even out distribution and reduce such inefficiencies and waste. Mitchell had worked as an investment advisor and securities analyst at Wells Fargo before meeting Bowman, who has a background in manufacturing, at the University of Minnesota’s Carlson School of Management, where both earned MBAs. Three years ago, they started General Blood.

The company has built an online system where blood centers can post available amounts and set a price. Eventually, centers will be able to advertise a need, much as traders might post buy and sell offers for financial securities. General Blood buys excess blood from centers and handles shipping and billing.

The result for Thomas Memorial, Upton says, is “national sourcing and a better price.” Not only will the hospital save money, but “what we order is what we’re going to get. We don’t run into the shortages we had with the Red Cross.”

Still, switching wasn’t an easy decision. “The Red Cross has been providing blood services for years and years and years, and to be one of the first in our market to switch was daunting,” Upton says. The Red Cross wasn’t initially interested in being just one of the hospital’s blood suppliers, he says, so it was all or nothing, but there are signs that they may be reconsidering.

Other transfusion managers also need to be persuaded, Mitchell says. “We’ve been on the road for the past three years, visiting 150 to 200 hospitals,” he says. The company has 10 employees and is on the hunt for more salespeople. So far 13 hospitals and 12 blood centers have signed on with General Blood. The company had revenue of $2 million in 2012 and has already booked more than $5 million in 2013.

General Blood currently earns about a 13 percent margin. “It’s too early to figure return on investment,” Mitchell says. That will come, he hopes, as the company woos and wins more hospitals, especially hospital systems. “That’s the next hurdle for us,” he says.