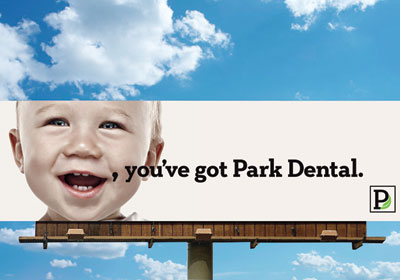 For some, going to the dentist has as much appeal as, well, a root canal. Maybe that’s one reason patients change dental providers relatively rarely. So Park Dental’s strategy is to position itself as the go-to provider for families when they make that long-lasting decision. In a campaign developed by GdB advertising agency, the Roseville-based Park’s ubiquitous billboards say, “Smile, you’ve got Park Dental.”

“We wanted people to feel like they can be your dental provider for life,” says Katie Warren, president of GdB, based in Minneapolis. To do so, GdB created “out-of-home” (i.e., billboard-type) advertising that features a baby, a teen, a mom, and a grandfather. “Smile” isn’t spelled out, but shown by winsome grins, followed by “you’ve got Park Dental.”

That’s all the copy—brief, with an uncluttered white background. The effect isn’t spartan; rather, it’s sparkling clean, the way people want their teeth (and their dentist’s office). The less-is-more approach works, especially since many billboards contain too many words.

“We’re big disciples of ‘Simple is better’ for out-of-home,” says Warren, who referenced work for clients such as Black Forest Inn and Summit Beer as examples. “We’re good at distilling a complex message that can be read on a T-shirt or on a billboard.”

That’s what GdB did with its name. Officially it’s Gabriel deGrood Bendt, but it’s been streamlined to a snappy (albeit spellcheck-unfriendly) GdB. The independently owned agency declined to reveal total billings, per company policy.

Though a smaller agency, GdB applies big-agency best practices to its work. For Park Dental, GdB conducted research beyond the standard demographics of gender and generation. Instead, GdB used Prism research, breaking down its target into psychographics of the wealthier “achievers and accumulators” and “affluent with teens,” and more modest, up-and-coming households labeled “PTA families.” The resulting media strategy is a unique mix of the outdoor boards coupled with a PBS sponsorship that Warren says was an important community-building component.

There’s also a sponsorship of the state high school hockey tournament, and even a “save-a-tooth kit” (in case the hockey game, or other youth sports, gets out of hand).

As with agency billings, GdB would not disclose the campaign’s cost. Given Park Dental’s scope, and the media chosen, however, it’s likely small—unlike the big-campaign execution.