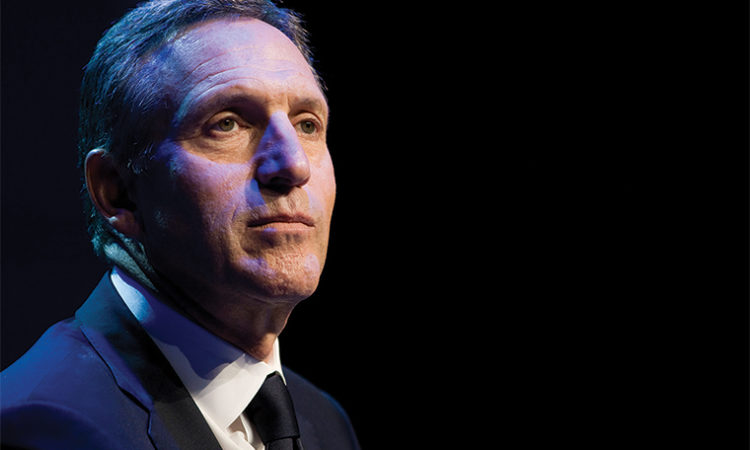 From Starbucks to Daddy Warbucks

Normally, I write an open letter to a presidential candidate after the Iowa caucuses, which are next year. Because you are smart and ultimately data driven, you will drop out of this race before Iowa.
April 01, 2019

Little Orphan Annie was always bailed out by her rich adoptive parent, Daddy Warbucks. You have announced that you are considering bailing out the country by running for U.S. president.

There is much about the present political environment that is cartoonish and entertaining. Your announced intention to run as a centrist independent candidate for president will be entertaining in exactly the same way that West Virginia voters reacted to Jay Rockefeller’s first gubernatorial campaign; bumper stickers read: “Make Him Spend It All.” That is the secret memo being circulated by political hacks who are encouraging you to run.

We can easily stipulate that yours is a life story worthy of emulation and respect. For a poor boy who grew up in the public projects of the Canarsie section of Brooklyn, you have truly lived the American dream. You built Starbucks from a five-store outlet to a public company with a market cap in excess of $87 billion. You did this by a relentless focus on customer service. Starbucks is famous for quality, efficiency, and customer-friendly innovations like free Wi-Fi, accessible restrooms, and a seasonal menu.

Just as Henry Ford wanted to pay his workers top wages so they could be customers, you, too, pioneered employee-friendly practices like health benefits for full- and part-timers (including their domestic partners) and stock ownership for all employees. Talk about Daddy Warbucks! Dominating a customer segment rife with competition—who doesn’t serve coffee?—required a relentless focus on the people who drink coffee and on the people who serve coffee. It’s a legitimate business case of American capitalism that deserves wide praise. Why screw it up?

Go into any Starbucks (you are never far away from one) and you will see a concerted effort to cater to consumer preferences—pumpkin-flavored coffees at Halloween, candy-striped offerings at Christmas, and nondairy options all around. A complete focus on customer preferences is a hallmark of truly successful retail companies. The business plan has been to give customers what they want—quickly, with high quality, and in a friendly environment.

Voters are customers of political products. The Schultz presidential campaign product rollout was exactly what customers do not want. It started on national television with an attack on the Democratic Party (your previous political affiliation). This is the same political party that scored major victories in 2018, including the most congressional victories since Watergate, seven governorships, and over 350 state legislative seats.

Your effort to give the voting customer what they did not want continues. Today’s presidential products are divided into those who support Trump and those who will do almost anything to see to his defeat. The Schultz offering is to attack both equally. Much of the current policy debate is around Democratic policy proposals to increase taxes on the wealthy to 70 percent (part of the Green New Deal supported by Sen. Kamala Harris), or to impose a 2 percent tax on all wealth in excess of $50 million (Sen. Elizabeth Warren). Part of the Schultz rollout was to attack Warren and Harris (by name) as “un-American.” Your comments on Trump were equally dismissive.

It is easy to dismiss independent “centrist” candidates when they run for U.S. president because they never get elected. Ross Perot is the most successful of this losing lot, getting 19 percent of the vote in 1992 (without winning a single electoral college vote). Congressman John Anderson got 6.6 percent of the vote in 1980 after a distinguished career in the House, and he did not carry a single precinct in the country. George Wallace, in 1968, did get 14 percent of the vote and 46 electoral college votes in five former Confederate states by running on a white nationalist, states’ rights platform—the complete antithesis of everything you have ever stood for.

Your candidacy will not survive for a number of other reasons. Billionaires, by definition, are out of touch, and seen as such by the electorate. Candidates viewed as elitist (Hillary Clinton and John Kerry) end up defeated. In a political dialogue devoted to increasing taxes on the rich, billionaires who oppose higher taxes are seen as the ultimate self-interested grifters. You fit the bill.

Normally, I write an open letter to a presidential candidate after the Iowa caucuses, which are next year. Because you are smart and ultimately data driven, you will drop out of this race before Iowa. Let me end by suggesting how you can really be a Daddy Warbucks in helping our country. Your example of intelligent capitalism—treating employees reasonably (and as owners)—needs to be aggressively advocated for. Your financial muscle should be used to support moderate candidates, in both parties, who will advance your agenda of balanced social policies. More importantly, we need you to be the voice of responsible capitalism to push back against both the far right and far left who would harvest the fruits of capitalism for their own governmental schemes. Starbucks is a shining example.