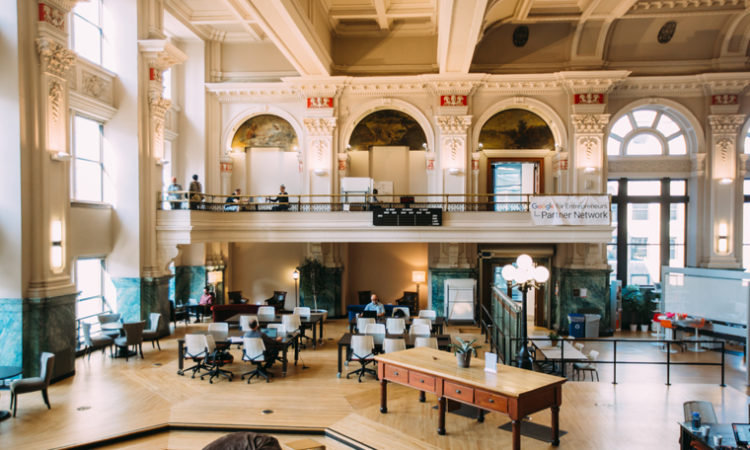 The central workspace at co-working institution Fueled Collective, formerly known as CoCo, which operates in the former Grain Exchange building in Minneapolis.

The Twin Cities landed a spot on the Top 10 Rising Cities for Startups, a new ranking from Forbes. Minneapolis-St. Paul placed 9th on the list; Columbus, Ohio, ranked at the top of the list. Forbes partnered with Washington D.C.-based venture firm Revolution to compile the list. Steve Case, the billionaire co-founder of AOL, is the chairman, CEO and co-founder of Revolution.

In pulling together a list of emerging startup cities, Forbes did not include the 10 metro areas that have drawn the most venture capital investment in the last three years. According to the National Venture Capital Association, 76 percent of all venture capital investments in 2017 went to just three states: California, New York and Massachusetts. VC investments are largely focused on Silicon Valley, New York and Boston.

Forbes looked at the 30 largest metro areas that did not rank in the overall top ten and then compared those cities based on 13 different categories including business and living costs, education levels, the presence of colleges, working age population growth, entrepreneurship rates and venture capital investments. The study relied on data from PitchBook, Moody’s Analytics and the Kauffman Foundation.

Based on its data, Forbes came up with a three-year count of 284 VC deals for Minneapolis-St. Paul. Just based on the number of venture capital deals, the Twin Cities ranks fourth among the tally of emerging markets.

Case’s firm launched its Rise of the Rest seed fund in 2014 with a goal of investing in companies based in cities that might be under the radar for most venture capitalists. The 75F startup, which developed wireless heating and cooling technology, won a Minneapolis pitch contest in 2014 as part of Case’s “Rise of the Rest Road Tour.” 75F started in Mankato, but is now based in Burnsville.

The Top 10 Rising Cities for Startups are: